Would like to start this weeks blog with an update on SJ's (my fiancee's) marathon training. She ran a route stretching over 15 miles last week (and got her first blister) and has covered distances of 30 plus miles in a week. Is fair to say SJ has been training hard for her run in her first ever marathon -The London Marathon 2012. Good going SJ! Fundraising has gone well for SJ too, she has currently raised £1,112 for her chosen charity, the BackCare charity. Thanks so much to all those that have sponsored her and supported her in any way. If you would like to check her website out, please visit this link: http://uk.virginmoneygiving.com/sarahbigrun


My training started out well this week. I took my road bike outside for the first time this year and cycled a familiar route with the usual goons. I felt like I was on a new bike, not because my bike felt new, but because my bike just felt different. The seat post is still stuck tight inside the frame and despite my increased weight and cycling with a loose seat post clamp, the post will not budge. We cycled a nice loop of 20 miles following Ron's 1 hour loop but extended the end to pass through Alcester and climb 'that undulating road' before passing through Sambourne to reach home.


My second cycle was a repeat of the route from the night before. This time however, it was day light and I was cycling by myself. Am real pleased I fitted a mudguard but my poor bike would have been happier with a clean too.


Refrained from doing any further exercise until the weekend. When the weekend finally came, I hooked up with Chris Hodge, Sarah M, Ron, Dave Meakin, Clive, Simon and Andy for the Snowdrop Express Audax. This audax event was the one that I completed as my first back in 2010 (along with Ron, Clive, Andy and Simon) and is now an annual affair for us all. I missed out on last years event due to sickness, and I started this one feeling not so great. 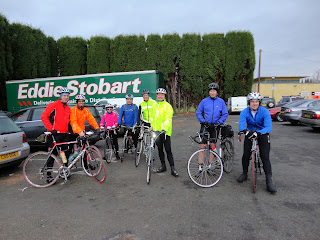 Was awesome hooking up with folk, some of whom I had not seen since 2010, at the start in Hartlebury. 8 of us started out together and largely stuck together for the most part of the first stage. This first stage wasn't so bad, the rain had not started and no major hills were encountered. Clive decided he would split from the group here and meet us at the second control taking his usual short cut. Then there were 7. 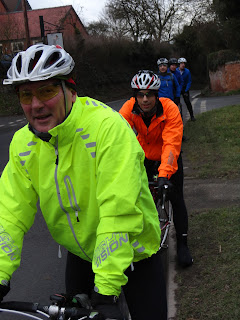 The Upton control was a welcome stop. I ate a tasty muffin and Kit Kat here, nicely washed down with a cup of tea. The group suffered more losses here, as Andy and Simon sped off to avoid getting the chills. Then there were 5.
5 soon became 6. Jimmy no mates joined our group. Jimmy was a cyclist who had (I guess) been dropped from an earlier cycling group for his bad jokes (''there's a low bridge coming up, you better duck''). Anyways, we cycled as a group of 6 all the way to the next control in Evesham. The weather took a turn here and started to rain. I was feeling happy though, especially because I had thoughts of SJ and passed the place where I proposed to her! Once at the control, we had a good feast again! I devoured an egg and beans toasted sandwich, plus a big chunk of chocolate cake and of course, a mug of tea.
When we left the control, the heavens had opened and it was cold (about 4 degrees Celsius). Passed the 'proposal spot' again and cycled on. Slowly lost feeling in my wet feet but no real bother. This last stage felt a little more undulating than the previous two, but no major hills. The steepest incline came with about 3k to go. We all made it safely to the top, and then pssst, I had punctured. The group, except Chris, raced on to the finish. Then there were 2.
Chris and I messed around for a while trying to sort this puncture problem out. The new tube I was going to use just would not inflate and my rim tape was all wonky. We fixed puncture after a few minutes and cycled off, believing the end was just around the corner. The end may have been just around the corner, but I was navigating and in my usual badger style, took the wrong corner. I safely led Chris and I (plus a group of say 6 more) safely to the Arrivee, but added a further few miles. At the Arrivee I left Chris to get my brevet card stamped. There there was 1!
Weekly totals: Cycled 120 miles.
at February 19, 2012