This week was comprised of a few short adventures and a big fat one at the end of the week! My adventures included cycling and running. My wife and dog joined me on one adventure too!

The first adventure of the week was with my mother and Ron. Ron had prepared a MTB route, which he called 'safari'. This safari route was a nice on/off-road jaunt in Studley that took in some amazing views, paths and descents and was created with my cousin Aid in mind. This route was created to motivate and inspire any newbie cyclist in the area. How disappointed Ron and I were when Aid had a dose of SFS (Southern Fairy Syndrome). All was not lost - at least my mother joined us for part of this ride.
My next adventure was a solo MTB trek, very similar to the Safari route. This route differed in that it avoided the lovely descent in the 'naughty fields' area. A couple of additional K's had to be ridden to avoid this descent.
My mid-week adventure didn't involve a bicycle. This adventure included my wife SJ and Cody dog. We all went for an off-road run together for the first time this year. We ran just under 5k together and were all quite whacked. Hard going this running lark. Can see why sister Jane has gotten herself a bike!

Post LEL and I find that a number of friends and family were inspired to start using their bikes again. My sister Jane purchased a new bike. Only yesterday (Wednesday) did Lin 'join the club' and purchase herself a new bike too. Lin has gotten herself a lovely Specialized Ruby and entered a ballot to hopefully ride the London-Surrey 100 event next year. I followed suite and have entered the ballot too!


On Friday, Ron and I headed to Gallagher Retail Park in Cheltenham ready to begin our Gospel Pass 200k audax. We found said car park but had to park a few blocks away as the car park is no longer free parking. After no real bother we found a suitable place to park and then got ourselves and our bikes ready for the challenge. On drive up to Cheltenham the heavens had opened but now the rain had ceased. With everything bike related sorted we rolled our way back to Gallagher Park and used Sainsbury’s ATM as our first control proof.

Leaving Cheltenham we had a 50k cycle to Hoarwithy. It wasn’t long until the heavens opened during this section. I was reluctant to put my waterproof top on as despite being wet it was still very warm. Ron insisted we stop and layer up. This was good advice as the rain became real heavy. We passed through Redmarley and as expected, red clay and mud was covering much of the road surface here. At one point the road was closed and we had to divert. Just before reaching the Hoarwithy control I stopped to take a picture of a lovely house that sat right next to the River Wye. 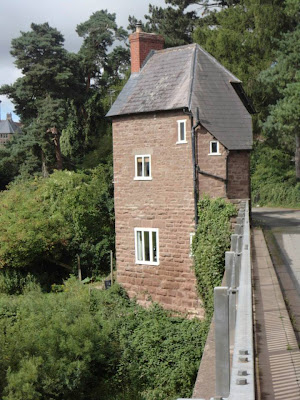 Some folk were swimming in the river too. Further photos were taken as control proof. The Post Office here was closed and is only open one day in the week. 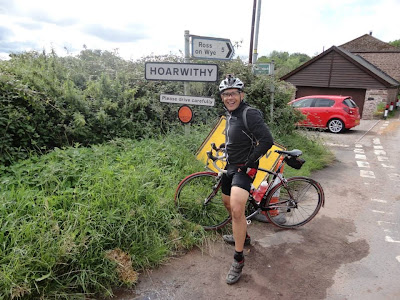 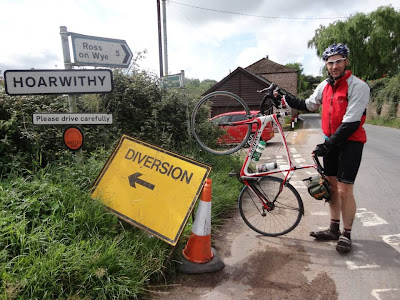 Leaving Hoarwithy, we also left all the bad weather behind. From here on it just got warmer and hotter. This section was the least interesting of them all and cycling so much of the B4348 became slightly monotonous. Thankfully, just after Peterchurch we turned off this road into more pleasurable country lanes. These country lanes didn’t last too long, we were soon back on the B4348. At this stage, Ron very nearly ran a squirrel over. Said squirrel darted between Ron’s wheels and then jumped about 6 feet (out of its skin) in the air and into the hedge alongside us. Lucky squirrel! A few pedal strokes later and we had reached the Hay-on-Wye control. The Tourist Information centre was closed so we couldn’t get a stamp for our brevet cards here. I could not believe the place was closed, this was mid-summer, surely you’d get more tourists now than at any other time?! We found a local store and purchased fluids and a few treats. Some random old guy started talking to me about Heinz baked beans (I was wearing my Heinz baked beans jersey) and then went on to talk about New York state, books, barns and jumbo jets.

The next stage was awesome. We left Hay-on-Wye and cycled the Gospel Pass. So wonderful. So beautiful. God’s creation is just awesome. We climbed something like 476 metres in 8.5k and then had a super-fast descent (super-super-fast if you were Ron) to the control in Llanthony. 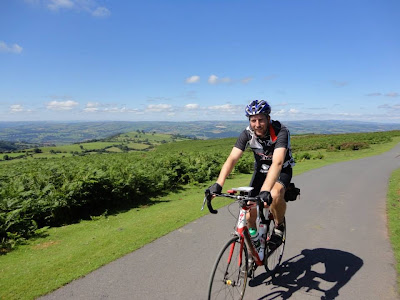 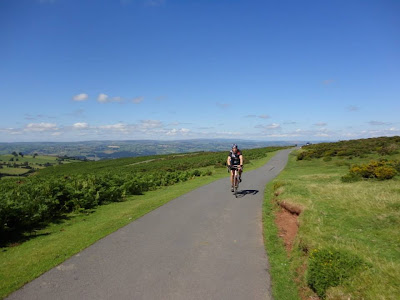 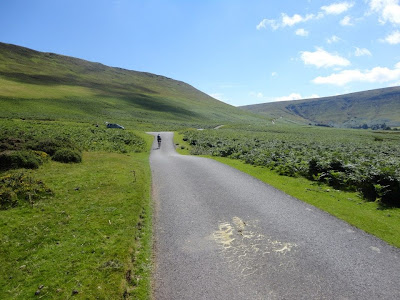 Whilst cycling this stage my mind was filled with images of SJ and Lunar. SJ, Lunar (in the womb) and I had been here only last year. The control was a bar next to some wonderful abbey ruins. Sadly the bar had stopped serving food (though we ate crisps, nuts and Bombay mix) but the wonderful sights and beautiful weather kept our spirits up. 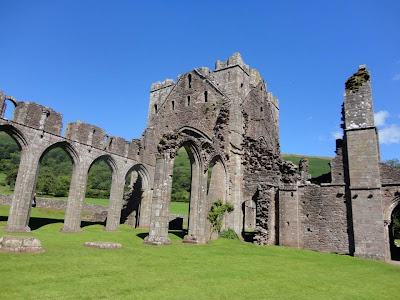 From LLanthony to Monmouth was seriously hilly. In fact, this section was more hilly (overall) than the Gospel Pass itself. We cycled 523 metres of ascent during this 42k stage. The mid-way point was an info control at Grosmont. Ron suggested Grosmont meant ‘big (gross) hill (mound). Again, this was a very pretty section. Just had to take a photo of the Monnow Bridge before we reached control. 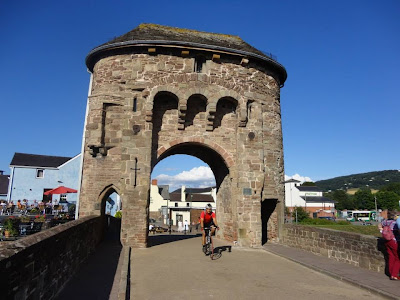 Feeling very hungry, I indulged much so at a Marks & Spencer store. I purchased sandwich, crisps, orange and a pint of milk plus additional fluids. Before we left this control we covered ourselves in sun tan lotion as it was very warm by now.

Monmouth to Cinderford was a short section but again very hilly. We climbed 371 metres in just 22k! It was nice to pass through the Forest of Dean – it reminded us both of my stag do. Before long we reached the control point and purchased a few more items of food and fluid. Ron and I both felt like we had cycled 200k already but we still had about 40k to go.

The final section wasn’t too hilly at all! We had some lovely descending and then long relatively straight roads to follow. Much of this stage was spent pulling each other along – long sections were ridden at over 30kph. We finished just like we started – by stopping at the ATM machine at Sainsbury’s for control purposes. Whoa, what a lovely adventure out! 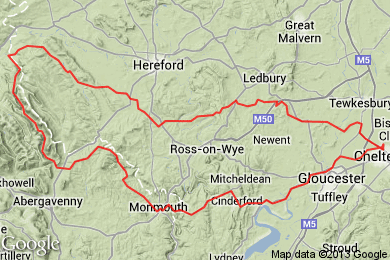 Our Gospel pass adventure was a 210k affair that took us 11 hours and 44 minutes to complete. It was a very hilly affair and scored us both 2.75 AAA points. By completing this ride, I have also completed my RRtY and AAARRtY awards! Woo Hoo!