No blogging for a short spell because I caught an evil bug. This bug took a while to pass. No cycling whilst the bug was with me. 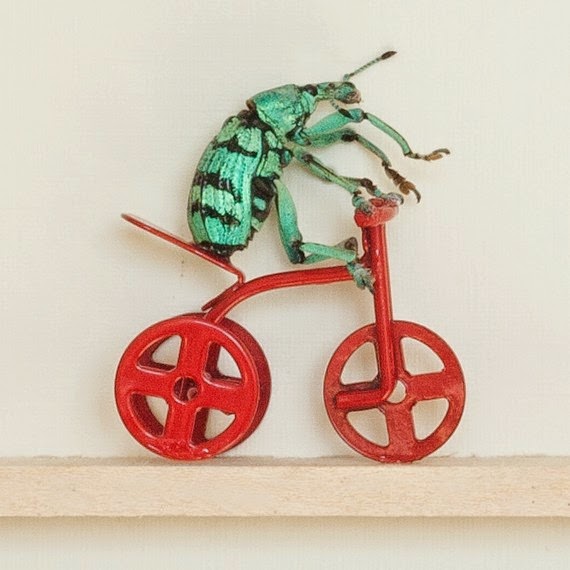 A mighty creature is the germ,
Though smaller than the pachyderm,
It's customary dwelling place,
Is deep within the human race. 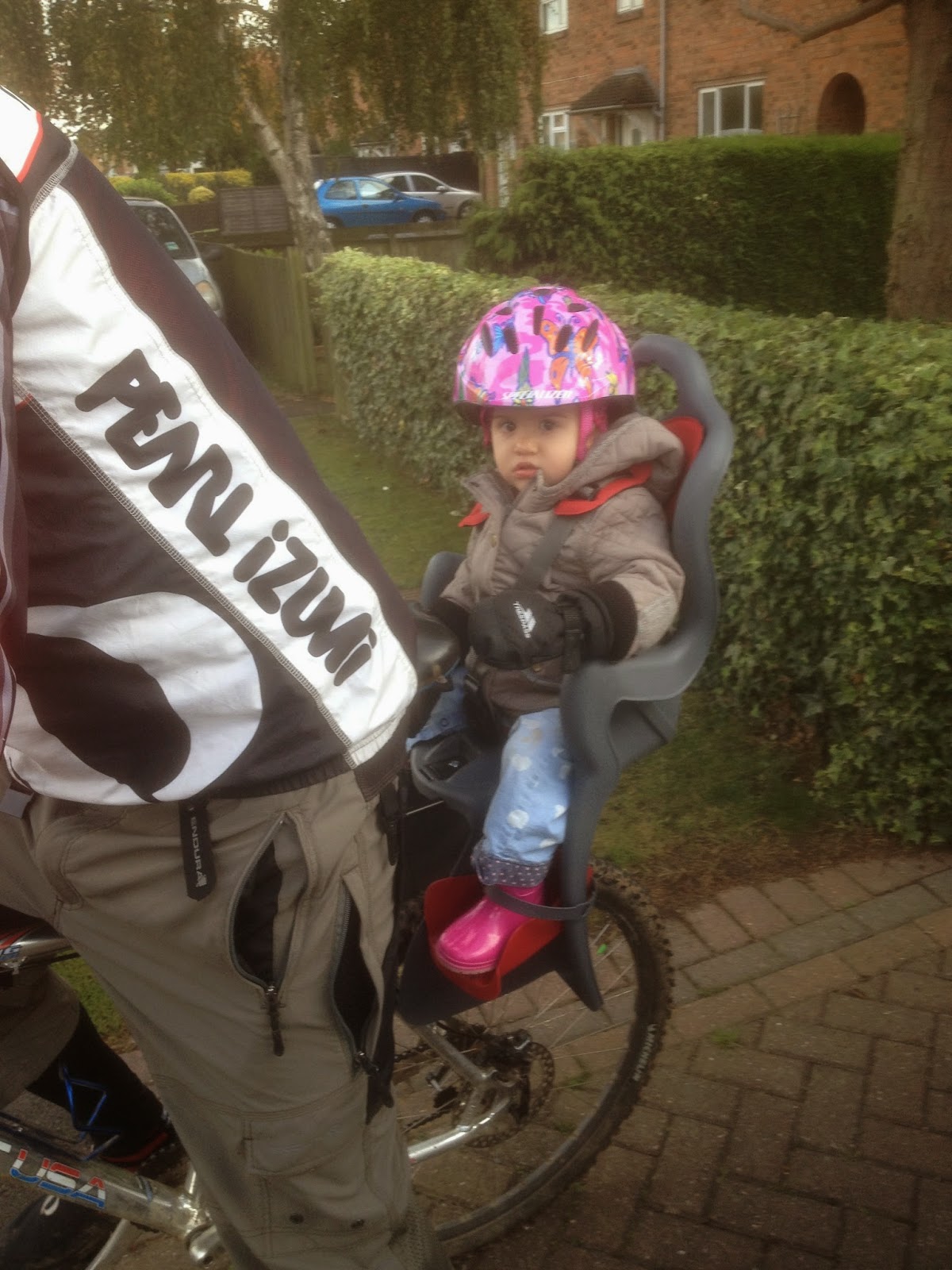 First ride after my short abstinence was a quick jaunt with Lunar and Kim. This was Lunar's debut ride! Lunar appeared real pleased to be sat on the back of my bike and was proud of her buff and helmet. I would have taken Lunar out in the past only it's taken this long for her head to fit her 'small fry' helmet. 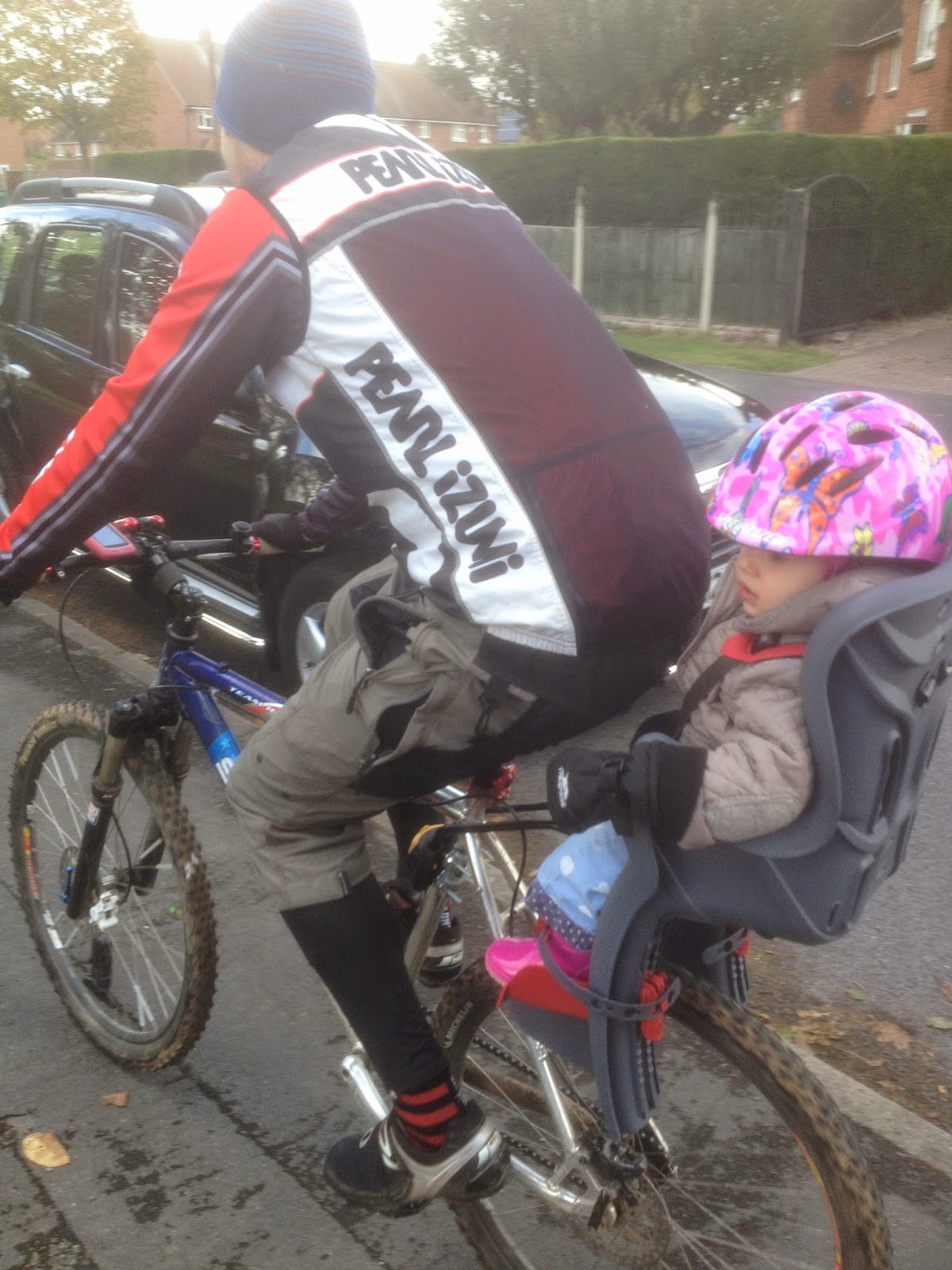 Lunar liked going over bumps and things very much which pleasantly surprised me. On Lunar's first trek we cycled all the way to Arrow Vale Lake, cycled round it and then returned home. Kim cycled all this way too but appeared to be out of puff during the whole ride. 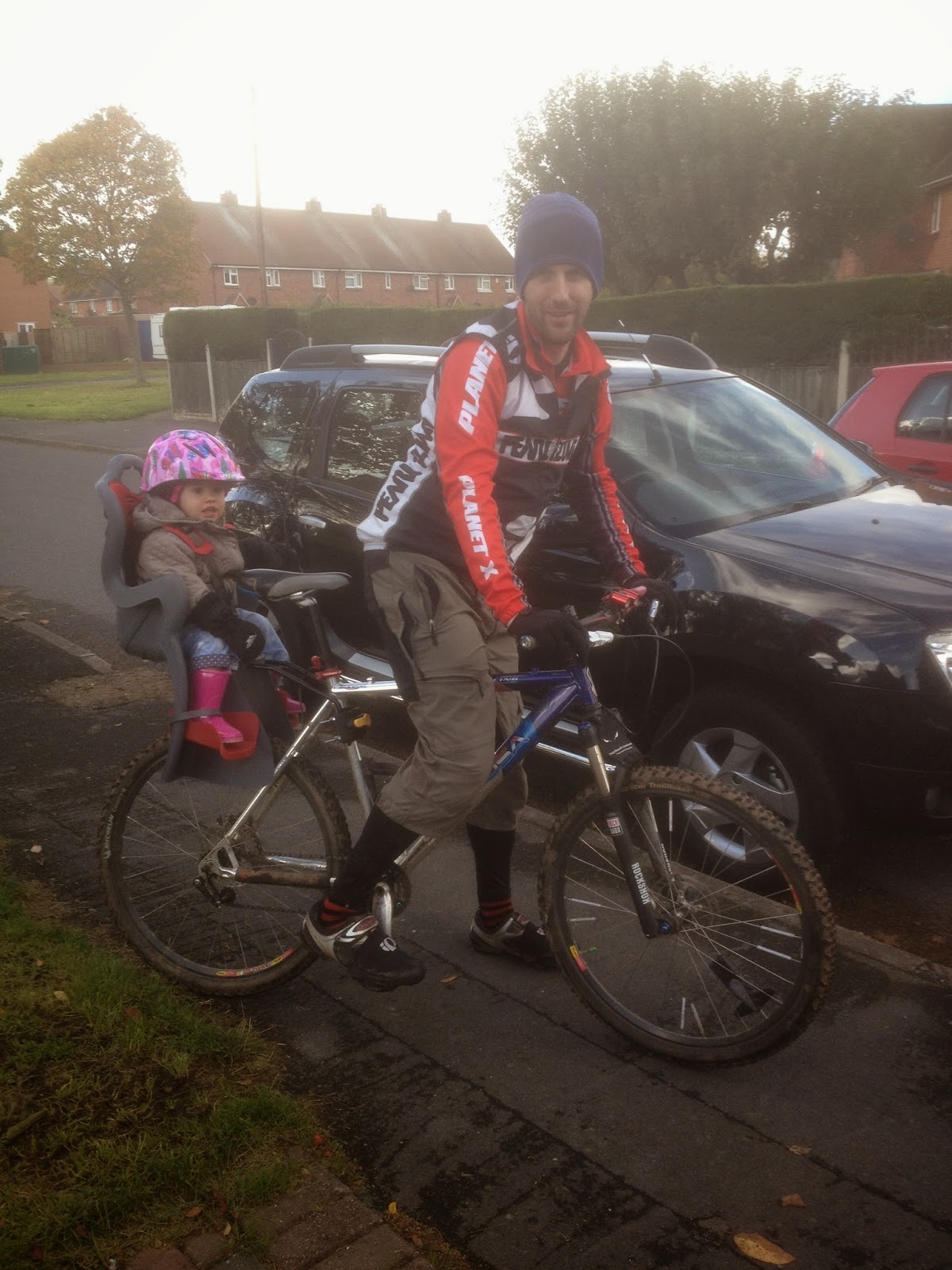 On Lunar's first cycle we covered about 15k. We both hope to have further cycling adventures together soon. Oh what fun!

Had lost my mojo a little. I think this was because I'd gotten ill and a lot of my buddies had entered PBP which I'm unable to ride next year. To help get my mojo back, I entered the following events.

Better yet, I am hoping to convert the Snowdrop Express into a 200k plus event and ride my first ECE! An ECE is an extended calendar event. Essentially, if I add distance to the event (by riding to the start, and riding from the finish), I hope to convert it into a point scoring event. It's complicated, but I think I've nailed it.

By mid-October my mojo had come back. To celebrate, I completed another 200k audax with Ron and Chris. This audax was Mr Pickwick's Autumnal Outing, a 200k Black Sheep event organised by Mark Rigby. This was a great audax and the first event to be completed for the 2015 season (which strangely started 1 October 2014). This was one of the few Black Sheep events that I had not previously cycled.
Ron, Chris and I all met up in Tewkesbury with a whole bunch of others ready for the start. This event was really well attended. For an Autumn day, the weather was great. Shorts and bare arms weather. At just after 7.30 a.m. we set off. For the most part the ride was undulating in nature and followed nice roads within a rural setting. The first leg was a 52k stretch that took us to Tredington. Was most disappointed when we reached the control because it was just a garage shop. How we all wished for a full English breakfast!
We had battled the early hills in stage one and so left Tredlington with an air of relief. Daventry was the next control but I kept reading the signs as 'dysentry'. Took few photo's on route but did stop to take pictures of a 'lizard' that Chris had spotted.
In our eagerness to eat, we didn't stop at the official control in Daventry. Instead, we stopped at the first eatery we spotted. This was a great control, it was a 'spoons pub. I ate a lovely chilli egg noodles and chicken dish. Mmm, delicious. Despite Ron cycling his new funky SL 4 bike on this event, it was my bike that received positive comments on this adventure. Indeed, a drinker at this control commented (about my SL 3) 'that's a nice bike. You best lock it up or else I'll nick it'. Hmm.

Suitably fuelled we left Daventry and headed for Chipping Norton. Chris was off form today and his left leg was giving him grief. My right knee had a niggle too. We considered swapping legs but figured that wouldn't work as we'd only give a bad one away and receive a bad one in return. Both Ron's legs were fine and he was off - we didn't see him again until the finish!

Chris and I stopped at a familiar control in Chipping Norton. The service was friendly enough but the food wasn't great and overly priced in my opinion. I ate a carrot and ginger soup. My quick visit to Sainsbury's (just up the road) was better where I purchased lots of fun size Twix bars. I got some ibuprofen for our pains too but that never seemed to help.
The last stage was a 57k trek back to the start. Just like the first stage, this stage had a few pulls and a few lovely descents. Despite Chris being in some pain, we were not quite the 'lantern rouge' and were aware that at least 2 cyclists were behind us. Started to get dark during this section but that was fine as we were suitably lit up. Very pleased to report that we didn't get cold or wet during any of this event. The tail end of this audax was great as it was mostly down-hill, a descent of at least 12k or more! Indeed, a very speedy descent took us into Winchcombe and then a more gentle descent took us to the finish in Tewkesbury. When we got our brevet cards stamped at the finish, we caught up with Ron again. Ron had already consumed 3 pints of beer at this point! All agreed, we had a lovely autumnal outing!

My other cycle adventures were the usual commutes to work and back. The canal from the Mail Box to University was still closed. I do hope it opens again soon. 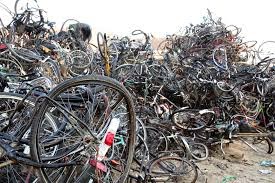 Lin and Chris donated some stuff towards my retro project which was great. Lin gave me 2 complete mountain bikes - all in bits and a road bicycle wheel. The bikes are a little small for me and the road wheel has too few spokes for a retro build. However, I plan to build up the bikes and sell them, possibly to fund the retro project. The wheel will come in handy elsewhere. Chris gave me 2 vintage wheels which will be just great fitted to my retro Raleigh Esprit. More building must take place soon.

People ride bicycles for all sorts of reasons. I ride mine because it's a form of meditation for me. Some folk's reasons are quite bizarre and wacky, such as the person in the pic below. Whatever your reason, go ride your bike! 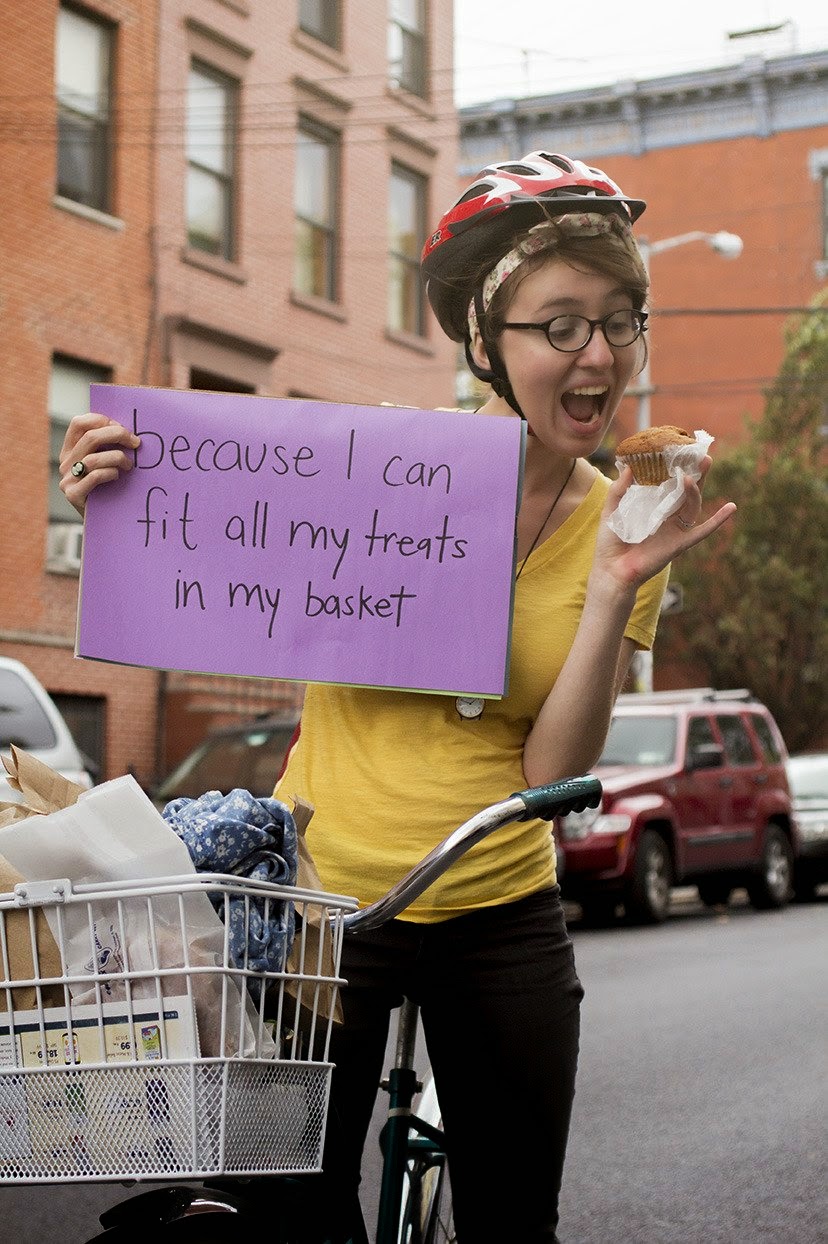 I've got a bike,
You can ride it if you like,
It's got a basket,
A bell that rings,
And things to make it look good..