This month saw me complete another 200k cycle ride. This event was a DIY perm that I created a while back and have ridden a few times. I forget the original title I gave this event, but have now settled on 'The RAF Badger DIY Perm'. I forget why 'Badger' featured in the original title but, hey, it kinda sounds cool. The RAF is appropriate as numerous RAF bases are passed on route. DIY because I created it myself (may have stolen ideas from elsewhere). Perm is included because it's a permanent  event (audax talk). Hope that all makes sense.

This was the first time I had rode a DIY event using a 'virtual' brevet. Traditionally, I always rode with a printed brevet card. There are pro's and con's with both. Geekily, I liked to keep my printed brevets as they were like real hard copies or proofs on the audax events I cycled. I guess, in this 'Save the World era', it's important to not use paper where it's not required and 'virtual' seems to be a sensible solution. Having a virtual brevet and using my GPX track route meant I didn't have to stop so frequently and buy stuff to get receipts to prove my passage. Audax is a simple and complicated 'thing' at the same time.

Anyways, back to my ride. I left Studley after a nice hot cup of tea with the Mrs and instantly felt the cold (freezing) chill in the air as I set off towards Broadway. My usually super bright Revo Exposure Dynamo light was not so bright as I headed out into the dark. This was because I had recently gotten a Sinewave USB charging device and connected it's wires to that of the light (pigs back cabling in effect). I unplugged a device (battery charger) from the Sinewave and aces, my light was super powerful once more. Not sure how cold it really was, however, ice was forming on the top of my helmet. Brr.

I didn't stop at my first control in Broadway, as I didn't need to. No proof of passage (save my GPX track) was required. One bonus of this new virtual world. Cleeve Hill was soon reached which was the first real climb of the day followed by a nice descent into Cheltenham. Cheltenham was my first stop, only to stretch really and say hi to Mr Bones who I noticed had one of his legs missing (most probably stolen I reckon, or in the mouth of some dog).
Another climb soon after leaving Mr Bones. Certainly started to heat up climbing, the frost on my helmet had now thawed and was dripping into my face. It still felt very cold and visibility was real poor with a thick mist all around. Now that it was light, I plugged my battery charger back into the Sinewave and it powered it up just fine and dandy. The Sinewave is super tiny and ultralight and appears to charge things up great. It just doesn't like lighting and charging at same time. I wonder if that experience is shared by others?!
Hit Cirencester but avoided the centre which essentially resulted in me cycling unfamiliar roads. On previous editions, I cycled some short off-road sections to reach Cricklade. This wasn't the case this time around. My Garmin was used to locate Cricklade and it took me a road way without much bother. Soon the delightful Stacey's cafe was found and food followed not long after!
Left Cricklade and headed for Witney. Was nice having fuelled up so well. Cycled past lots of RAF bases and the roads in general were a pleasure to cycle. I didn't have to (and so didn't) cycle into Witney centre and ventured out of Witney as soon as I passed the first 'Welcome to Witney' (or whatever it said) sign and again cycled unfamiliar roads. In need of a quick rest and to eat my pre-packed sarnies, I stopped at a Church in Leafield and chilled out for sometime. Still cold but the sun was shining bright.
Left the Church and headed home, although home was still about 70k away. After some time I hit a road that seemed to go on and on and on. This road took me past Shipton and into Stratford. I noticed my battery charger was fully charged thanks to the Sinewave and so unplugged it once more allowing my Revo light to shine bright. It really did shine bright - I passed an old woman who commented 'your light is ever so bright' in a disapproving tone (we were sharing the same cycleway, only she was on foot). As well as testing my new dynamo charger, I was wearing my 'new' waterproof shorts on this ride. These shorts were a pair of Altura 5/40's and these replaced my previous Cube shorts (which got shredded following my fall during the Giant's Tooth escapade). These shorts were waterproof though did not test this as the rain did not pour. These shorts were a great fit (size XL) and are supposedly reflective. I very much like the fact they have zipped pockets and it was also neat that I got them in a half price sale too!
My Sinewave and my shorts served me well on this ride and was pleased with both. They both nearly saw me complete a solo adventure. I say nearly because just as I neared about 5k from home, I bumped into (not literally) my buddy Ron. I added a few extra km's and cycled back to my village with Ron. This was a neat finish as we initially planned to ride this whole audax together. Boom - what a day!


**********
In other news, I saw a rather funky band play. This was the wonderful Bombay Bicycle Club. SJ and I saw their performance on the last day of January and stayed overnight to make a weekend of it. We met certain band members parents whilst in the queue who told some rather interesting background stories.
One 'heavy' day at work involved a meeting with HR and a couple of my staff. Ha!
Our girls have continued to keep my busy and entertained. They attended 2 Sunday School party's on the same day. They performed in a play at the second party too.
Also at the party in Bournville was my buddy Dan. He deserves a special mention for his random act of kindness. Only the previous day he spotted my watch strap was about to break. (My watch is rather special to me because my wife SJ gave it to me on my 40th birthday - another act of kindness). Anyways, Dan rocked up with a new watch strap and fitted it for me. Respect! 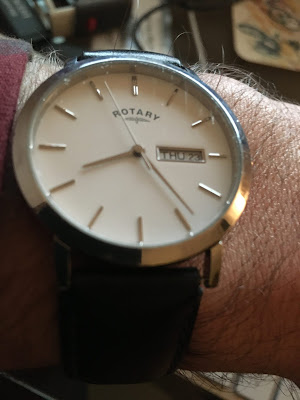 Time to end my blog post. See what I did there...