The day I was a black sheep

What an awesome day the Silk Run turned out to be! This was my fourth completed audax event. Each and every audax event thus far has been awesome. Was a bright sunny start (and remained bright, hot and sunny throughout). This event attracted about 65 participants and had the usual mix of old and young, thin and fat, those on tandems, those on fixed speeds, a higher number of females than usual and me! A really well organised event. Hats off to the Black Sheep Cycling Club. At about 9.35 a.m we had an event briefing and then followed the mass participation start. 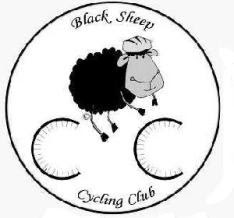 The first stage followed paths I have cycled before (and am convinced were part of a previous audax I have completed). Nice quiet roads taking us through Gotherington, Greet and Didbrook. Then came the only real hill of the whole event. I felt pretty good here because I powered ahead leaving all the fellow cyclists behind (largely due to the limited teeth on my casette, rather than my fitness level). I reached the top of the hill and carried on going - silly me, I missed a left turn and had to back track a few miles. Once back on route, chatted to a number of cyclists - one of whom is cycling London to Paris next month (I am cycling there this month!). The first control was very pleasant and was the site of Broadway Tower (where 6 different counties can be seen from the top of the tower). I treated myself to the obligatory tea and cake here.

Stage 2 was fast. I cycled this as a completely solo effort, not even seeing another cyclist. The route took me down the infamous Fish Hill. This hill is awesome and I often use it as a training ride, however, this time I was going down it rather than up. Super zoomy! So zoomy, I flew past the cycleway and had to back track again. Back on route and I cycled through Childswickham, Aston Somerville, Wormington and Dumbleton. The control was at Beckford Silk. As soon as I stopped at this control, my pores opened and sweat just gushed from me. I had for possibly the first time ever, no appetite. I forced myself to eat a plate of beans on toast and washed this down with a cup of tea and set off again.
Stage 3 was again a fast section. I cycled this largely as a solo effort too, but was forced to stop for a train at a railway crossing allowing cyclists to catch up with me. Sped through Overbury, Eckington, Besford, Wadborough and Littleworth. Really was a hot day, no wind and the air felt stuffy. The control was at a garden centre. Again not hungry, but forced mysel to eat a kit kat before pushing on to the final stage.
The final stage again followed really pleasant lanes with hardly any traffic to be seen. Sped past Hatfield, Kinnersley, Dunstall Common and into Strensham. The finish was close to the start and was at the Royal Hop Pole pub. Finished this event with a big smile on my chops, a cyclist's tan and an awesome 100k Silk Run medal. Was an awesome day being a black sheep in a flock of black sheep.
Cycled a distance of 68.23 miles in 4 hours and 23 mins, with an average speed of 15.5 mph (and a max speed of 38.6mph).
Weekly totals: Cycled 110 miles.
at June 05, 2010