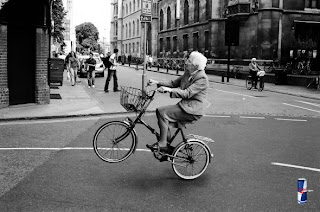 My road bike 'Cayo' felt like a broken bicyce this week. Only used her on one ocassion and then she was swiftly taken to the bike shop (Speeds Cycles). Speeds Cycles aren't too speedy at all - Cayo remains there still. Hopefully, Cayo will come out a new machine - with new chain, casette, jockey wheels and possibly new cables too. In this world of cycling, everything falls apart. Even my carbon shoes have a crack in the sole.
Scotty had a relatively good week. Ron and I took our steeds to the forest in Sambourne (those dreaded woods where I have lost a pedal, lost a crank arm, slept out under the stars in -4C snowy conditions and scarred my body from falling off bike and landing on barbed wire fence). The woods selected Ron as their victim this time around and threw him from his bike. Following these woods we cycled familiar paths through Coughton and back home via the off road routes past Studley Castle. Scotty had a second trip where she again loosely followed the no.5 cycle path and went through Morton Stanley, Webheath and Arrow Vale. 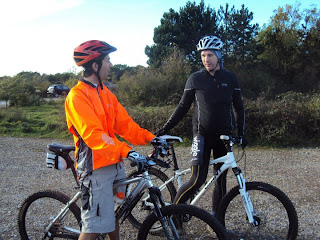 The last bit of cycling completed in the week was on my sisters bike. She has a small Giant (is that an oxymoron?!). Myself, Guy and Chris from the LEJOG 2010 group met up with about 20-30 others for a cycle around a common in Newbury. Following this cycle, we all returned to Newbury Christadelphian hall where Guy presented a short slide show on our LEJOG 2010 trip. Guy informed that we had raised about £8,500 for our 'Happy's' charity. Simon Peel (not a LEJOGer) then gave a presentation about 'Happy's' and showed how some of the money had been spent and high-lighted some further projects. Simon is heading for Cambodia today and later next year will visit Happy's - all these trips involving charitable work from Simon. Good luck Simon and well wishes. 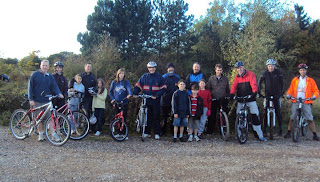 Non-cycling nonsense this week is as follows. On monday I went on a walk with folk from work, namely Max, Adrian and Cecilia. We walked laps around Ladywood (or is it Egbaston?) reservoir. I walked a total of 4.86 miles. My friend and work colleague Dr Faisal has diagnosed me as having cyclothymia. Cyclothymia is a mood disorder characterized by numerous hypomanic (and depressive) periods with symptoms like those of manic and major depressive episodes but of lesser severity. Cheers Doc! Lastly, my friend Ree popped over and was showing off her carrot art. She had artistically decorated a carrot, which Cody thought was awesome ... indeed, Cody stole said carrot and ate it!
Weekly totals: Cycled a distance of 60 miles.
at October 24, 2010