'Nothing will work unless you do...'


Started the week with an indoor cycle. First time I had been on my bike in exactly a week. This was also to be, perhaps, my last cycle with Cayo in her present state. Poor Cayo is being returned to Wiggle because her front mech hanger is loose and is moving inside the carbon frame. Hopefully the frame will be swapped for a brand spanking new one - let's hope, we'll see. 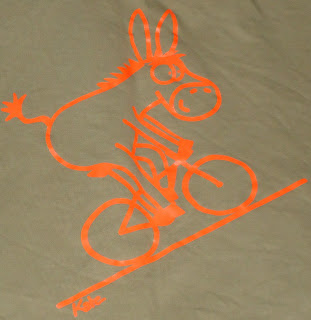 Monday also proved to be an interesting day in that Ron and I were featured in a magazine. Would this prove to be our 15 minutes of fame?! We are pictured cycling the 'Mr Pickwick goes to Hay in a day' 200k audax, in the 'Arrivee' magazine (no.110, Autumn 2010, p37). 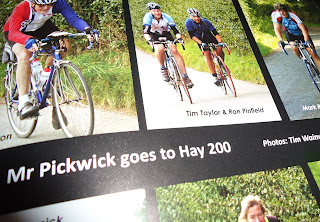 My friend Polly popped over at the beginning of the week too, and gave me some arnica to help with the healing of my operation. I am not overly familiar with arnica, but it reminded me of Dave and Ian Cross, 2 of the LEJOG 2010 group (I keep getting them both mixed up). One of these Cross brothers used arnica on the LEJOG 2010 trip stating that it helped with bruising. I wonder how Mr Cross is now, following his bike accident a few weeks back? Thinking about you buddy, and wondering if you are using arnica now?!
'I tried being normal once. Worst 5 minutes of my life...'
Poor Cayo was collected by a big van on Tuesday and carted away. At present time I have no idea as to what Wiggle plan to do. Am just waiting and hoping. One of my friends, Louisa Blankson, informed me that she now cycles to work ... I'd like to see a picture and post it on this blog.
Wednesday proved to be a bizarre day. I revisited the magic faraway tree (the Great Oak), that I first encountered during the Mr Pickwick goes to Hay in a day audax. This time I was without my mate Ron and without my bike (remember, I am off sick this week?!) and was with my friend Marianne. Now the weird thing was, that during a random audax with Ron, we saw a pig - the victim of road kill, which Ron swears was a wild boar. Now, here at this magic faraway tree, I spot a living wild boar munching on acorns! Marianne says wild boar don't exist in the UK, but I present the evidence below: 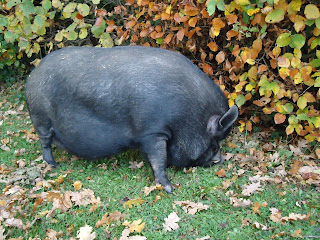 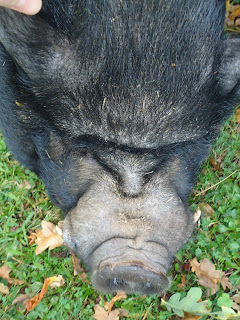 Thursday proved to be a day of rest. I am not really a fair weather cyclist, but the weather seriously was awfull and put pay to any plans. Friday too was a day of rest, but on this particular day I took my self and Scotty to stay with my sister Jane and her family ready for the Evans Cycle Ride it! event on saturday.
Saturday was great. After leaving Jane's house at around 7.30 a.m I made my way to the start of the Evans Ride It! off road event in Cliddesden, Hampshire. Here I met up with my cycling buddy, Chris Hodge. We were in for a fun filled day.

After setting up our bikes, attaching a chip to our ankles and genereal faffing about, Chris and I made our way to the start line. We decided we were hard core cyclists and opted to do the long route option - a 33 mile course. After a short briefing we were off.

We were just the other side of the M3 from Basingstoke and in some lovely countryside following By-ways, bridleways and other bikers. The most hilly part of the ride seemed to be here, right at the start. Maybe the start seemed a little difficult because we didn't stretch or warm up.

The course was pretty awesome. Just what I had expected. Mud and lots of it. Why did I forget to bring my glasses and why did I forget to bring my camera. No problem, Chris had both. Why didn't I fit super knobbly tyres to prevent my back end overtaking the front? I think this was to provide light entertainment for Chris. We were both able to laugh at each other to be honest - we were both absolutely plastered with mud and at times cycling through this gloop was real tough. 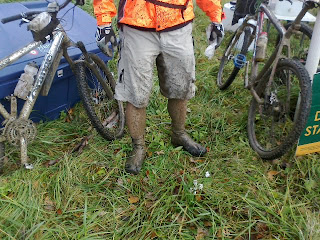 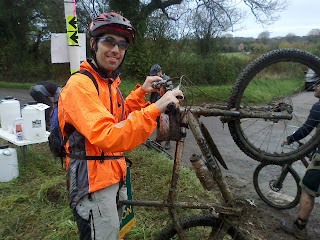 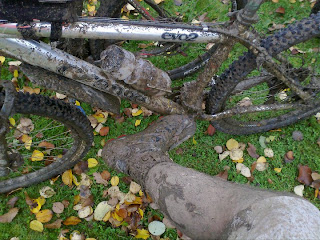 Our route roughly followed a figure of 8 patten. This was great because it meant that we passed the water stop twice. The water wasn't anything special, but the cake was awesome! Mmmm, delicious! 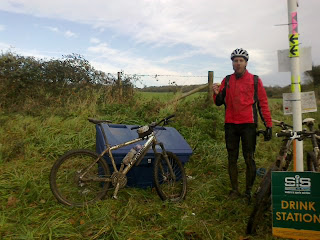 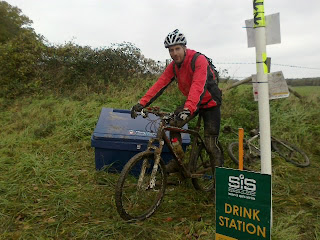 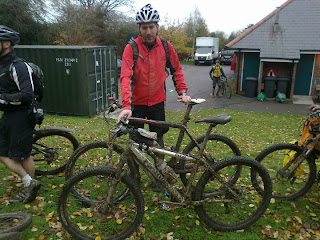 The more we cycled, the more we got covered in mud. We didn't cycle any particularly big hills, but plenty of little valleys, wooded sections and open farmland kept our interest up. We were feeling really proud of our efforts when we spotted the finish/start just ahead - but it was then that we realised we had missed a split and only completed the medium route. So much for being hard core! We shrugged of our mistake and figured that gave us more time to spend in the pub! 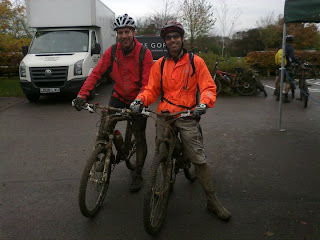 During this off road event, I cycled a total of 25.95 miles, at an average speed of 8.2mph and a max speed of 29.7mph. I have recently been using a heart rate monitor and my average heart rate (AHR) was 133 and my maximum heart rate (MHR) was 176. With these readings, I was pleased to find out that I had been cycling in my 'aerobic zone' which 'gives you the biggest fitness benefits in the least time'. Riding in this zone 'builds cardiovascular efficiency... The exercise high ... results in mood improvement, reduced anxiety, and improved appetite control'. Or so they say, I ate a large portion of fries and a big steak following this activity!

Sunday was no day of rest! On this last day of the week, I went horse riding! Marianne kindly let me take Neon B out for a short walk and trot. Neon B is a large white Spanish horse who has enetered various competitions in his time. Neon was quite awesome and even jumped with me sat on his back. Don't think I'm going to trade my bikes for a horse just yet though ...
Weekly totals: Cycled a distance of 42 miles.
at November 14, 2010