'Forgive your enemies ... it messes with their head'.

Great start to the cycling week. Got the rollers out and cycled 20 miles - my furthest distance on rollers yet. And, to top that, cycled with a AHR of 140 - all in Zone 3! 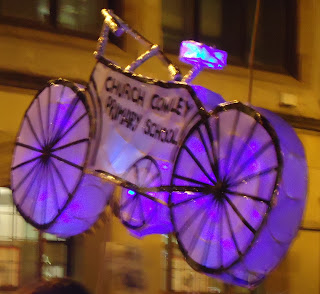 Trouble with great starts is that they are hard to keep up. My second cycling venture was with Ron. We cycled familiar routes around Great Alne, Coughton and the likes all at a leisurely pace (< HRZ 1). It was a cold night, near freezing but we were layered up well. I punctured which was menace. A dirty little thorn had gotten stuck in my tyre. After goofing about for a while, said problem was fixed (changed the tube, removed thorn) and we continued home. At home, I found that I had put the tyre on the wrong way around, and this new tube had punctured too! Grr!

Midweek, I got good news. Wiggle emailed me to say that they had gotten my shoes I had returned and they were sorry they were faulty, were happy to replace them, and have credited me the money it cost to send my shoes back to them. These Lake carbon shoes had been faulty for ages. The carbon sole had cracked on one of the shoes. These shoes originally cost me £77, the very same shoes are now selling at £97! I would not have sent these shoes back if Wiggle had replaced my bike frame. Happy feet!

'After years of struggle, I no longer have to fight with my inner demons. I'm on their side now.'


No sooner than receiving good news from Wiggle, they email me with bad news. Wiggle informed me that they were unable to supply my new shoes as their supplier had ran out without telling them. To be fair, Wiggle were quite good - they re-imbursed my monies (I paid £77 for shoes, they put £87 back into my account) and gave me a voucher for £7.80. I have already used the voucher and ordered a buff. I have a pending shopping trip now for new shoes. My feet remain quite happy - they walked 5.88 miles yesterday with Eddy and Adrian from work. A few folk from work have started walking on a regular basis and this is the 2nd occasion that I have tagged along. We walked five laps around Handswoth Park. Following this walk, I over indulged on much curry, naan bread and the likes (well it was Dr Nina's and Dr Bal's leaving do). 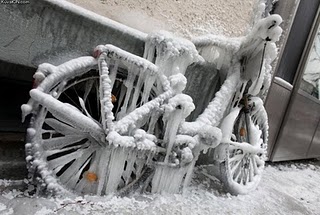 Had vague plans to go out cycling on the weekend. However, we had much snow. The snow meant 'no'! I think the snow prevented a number of folk from going out and cycling. The picture above was stolen from Clive's site and shows just how severely snow can dampen one's cycling. I could have used rollers I hear you mutter, but, remember I have no cycling shoes for my road bike. On that note, I used today as a shopping day and have ordered new shoes, as shown in the pic below. 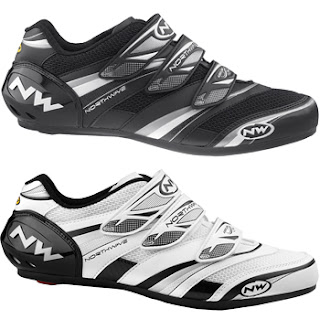 Also got my hand on some new gloves, but my hands have not been 'in' new gloves as yet. The gloves were Specialized BG deflect gloves and supposedly 'BG padding distributes pressure and minimizes hand numbness'. Once I've tried them out, I'll post what I think on this blog.
This weeks blog ends with a funny tale. My mate Ron has just purchased a new crank set. When he removed his old crankset he realized that for the past 10 years or so he has been cycling with crank arms of 2 different lengths!
Weekly totals: Cycled 38 miles.
at November 28, 2010