'Ride a cock-horse to Banbury Cross,
To see a fine lady upon a white horse;
Rings on her fingers and bells on her toes,
And she shall have music wherever she goes.'

Started this week with an epic adventure with Aid, my cousin. We completed the Cheltenham Banbury Cross 200 audax. As the name suggests, this was a 200k cycling event (perm audax) that passed through Cheltenham and headed to Banbury Cross.

Aid and I started our adventure on a side street in Broadway – this saved us £6 on parking fees. As I readied my bike, I was in for a little bother. The headset was loose and my front wheel appeared to have a slight buckle. The loose headset was annoying (despite being easily fixed) – it was brand new and had just been fitted by Speeds Cycles in Bromsgrove. The wheel only had a slight buckle but the rim would keep catching against the brake block as the wheel spun. Oh well, on with the adventure. We headed to the High Street so I could purchase some banana’s and get a start control proof. And then we were off! It was a lovely morning and passage through Winchcombe was very pleasant. The official (or suggested) start was the next control. However, starting in Broadway was good on 2 counts. Firstly, Broadway was nearer to my home and secondly, we got 1 of the hills out of the way early on. This first hill was Cleeve Hill which I have cycled many times now. This was a first for Aid. Despite not being a major hill, it is still enough to make one feel ‘out of puff’ by the time they reach the summit. Reach the summit we did and then we were blessed with a super-fast descent down into Cheltenham. 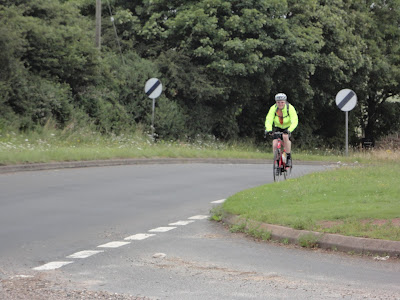 Stopped to buy 2 Fudge bars in Cheltenham because Every Good Boy Deserves Fudge and this was a suitable control proof. Luckily we only skirted through Cheltenham and quickly we were heading out of it. Headed out but we were heading up. The second big ascent was during this stage and took us up Lilleybrook Hill. Again not a big, big hill, but enough to get the heart and lactic acid going. Nice long stretches of country road were cycled here and took us through Cirencester and up to Latton. The instructions (destructions?) went a bit wonky here and we just couldn’t find the tarmac bridleway to Cricklade. No bother, a real short stretch of carriage way was negotiated and took us swiftly to the control. 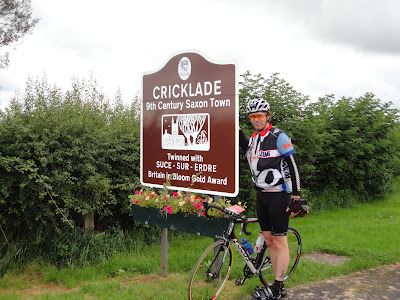 Cricklade was a lovely control. We stopped and topped up with water from Tesco for control proof purposes. A quick bite (fruit loaf) and we were off again, knowing that the next stop would be our lunch stop. The weather was still lovely at this point and as we made our way, we passed the airfield at Fairford. Am sure it was here that a plane disaster took place a few years back. More lovely country lanes were cycled and took us nicely into Witney, our food control. This was a good stop. Aid had beaten his previous furthest cycle trip by 1k – he had now cycled 101k! We celebrated by having a mega all-day breakfast in a local café. 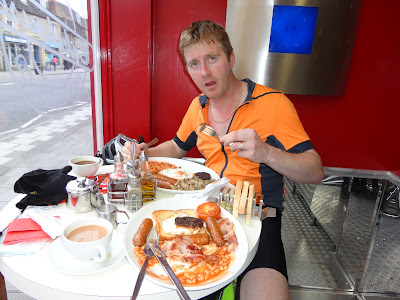 This breakfast was huge and mine consisted of 2 tomato’s, egg, black pudding, 2 bacon, 3 sausage, toast and a big cake. Washed this down with a pot of tea and felt my weight had doubled. A look at my watch and found time was slipping by – then I realised why…. We ‘clocked’ the Witney time thief! 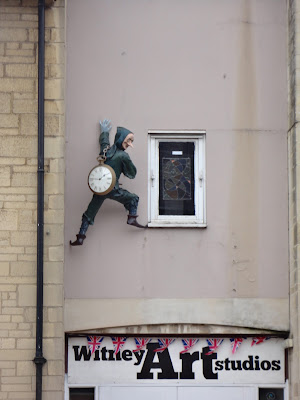 With heavy bellies we left Witney and headed to the next control. This was really turning out to be a lovely ride on good roads. After passing through Bladon one particular road passed over a river, canal and rail line which was interesting. Reached Bicester and purchased Lucozade to wash down the meal from the previous control! 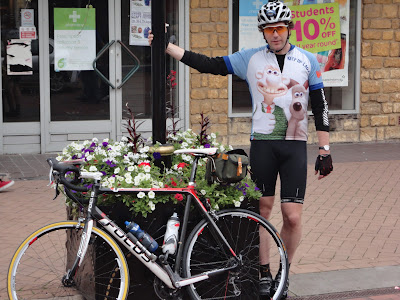 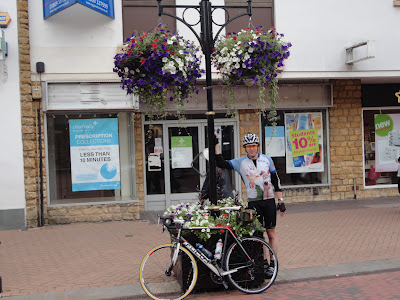 Not long after leaving the Bicester control it started to rain. It wasn’t heavy, but wet none the less. We stopped to layer up and continued our journey passing through Aynho and Adderbury. Before too long, we could see Banbury Cross in the distance. Banbury Cross was very pretty and wasn’t really a cross (though a tiny cross was on top), it was more like a tall pillar. We spotted the fair lady but she wasn’t on a white horse – she was on a grey one?! More interestingly, there was a wee frog under the horse’s front hoof. We faffed around here for a short while – I had lost my glasses (again) but found them before leaving. Aid purchased some Neurofen here (I took the receipt) and we both popped a couple before we set sail on the final leg. 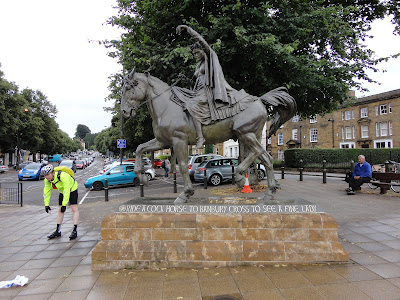 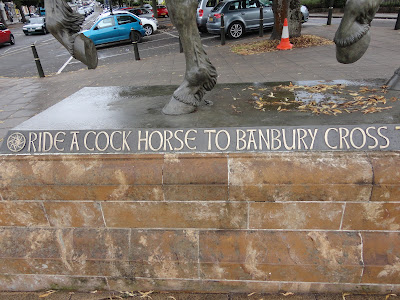 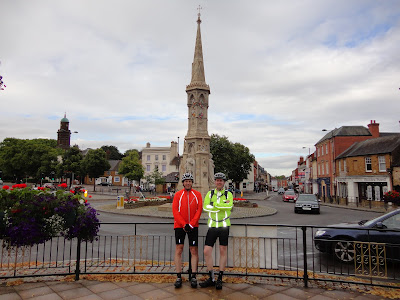 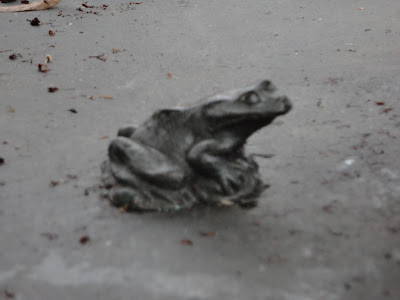 For the most part of the route it had been relatively flat (mostly descending) and fast roads (with the exception of the 2 hills at the first 2 stages). Things were a little different during this stage – it was way more ‘lumpy’ or undulating if you prefer. The roads really were roller-coaster like. Short climbs followed by ring-twitching descents. One particular roller-coaster type road stretched for over 20k and was awesome to cycle. Aid’s bike suffered with a bit of speed wobble during the descents. As I was cycling said road I suddenly heard Adrian scream ‘wa-hoo’ (and witnessed passer-by’s look of shock) – Aid had reached another target and had now cycled a 100 miles! As we continued our way we passed through Chipping Camden before reaching signs for Broadway, our finish point. Reached a junction and Broadway was signposted as 5 miles away to the left but the route sheet stated to continue straight over. Left looked hilly, so we went straight over. Good choice! – we were awarded with another amazing descent, a 1:8 descent! Once at the bottom of this hill, we really felt like we were in Cotswold country, what with all the sand-stone buildings and all. The final stretch took us past a shop called H J Taylor’s which always reminds me of my nan (she wasn’t a Taylor, but she was a H J and had a daughter, my mom, who is a Taylor). A last push and we reached the High Street in Broadway. We stopped at a local pub for purposes of celebration and control proof. Aid had cycled 202k (125 miles) for the first time ever and successfully completed his first audax. This was a first for me too – the first time I had completed the Cheltenham Banbury Cross 200 audax! What an awesome ride, probably won’t be the last!