This week saw me complete the Cheltenham Gospel Pass 200 audax. This was a hilly (2.75 AAA points) audax that started and finished in Cheltenham and reached the Gospel Pass at about the half-way point. I followed the route in an anti-clockwise direction.

Found free parking at a retail park in Cheltenham and chose to start my adventure here. Purchased a Kit-Kat from local Sainsbury’s store to use receipt as first proof of passage and then I was off! Started off with mild weather and nice fast roads. Passed through Coombe Hill without noticing any real ascent at all. So smooth and zoomy were these roads that other cyclists were out and about including a time trialing cyclist who whizzed past me. Before long I had crossed over the River Severn and was then following quiet country lanes that passed through Redmarley. I think Redmarley was so called because the mud was red in colour – there were lots of dirty muddy red coloured puddles that had to be navigated through before reaching Brooms Green. Prior to reaching Much Marcle, the heavens opened. The rain beat hard. No worries, I layered up with waterproof shell and continued on my way. Up until now the route had been speedy but now little ascents were starting to slow me down. Almost as soon as I had crossed the River Wye, I had reached the first control point at Hoarwithy and had cycled the first 50k of this audax. Finding a control proof in Hoarwithy was a difficult task – the pub was closed and the Post Office was only open on a Friday for 2 hours. I took a photo for my control proof. After munching on my Kit-Kat and removing waterproof shell (as the rain had passed and the sun was shining real bright) I set off again. 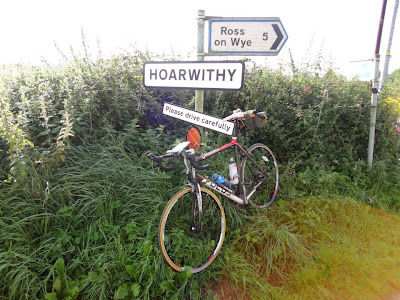 The next stage took me from Hoarwithy to Hay-on-Wye. I have cycled to Hay-on-Wye a few times recently, and as on other occasions, followed a long stretch (easy to navigate) of the B4348. I turned off at Peterchurch and followed very quiet lanes through Dorstone and then reached Hay-on-Wye, the Town of Books. Was very easy to find a book here but proved more difficult to find a shop that sold cold drinks. A regular café that I have used on numerous audax events was closed! I found a fudge shop and purchased a sesame seed bar (delicious) for control proof. After much wandering finally found a shop that sold cold drinks. After guzzling much liquid, I set off once again. 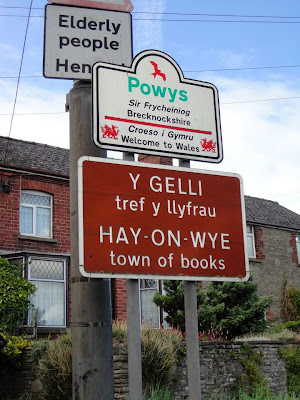 The stage to Llanthony was amazing and by far the best stage. Pretty but hilly. Climbing started almost straight away as I cycled the Forest Road heading for Capel-y-Ffin. This road crossed the Gospel Pass! Before crossing the Pass however, at the foot of the climb, I heard a pssst! Grr, was convinced I had punctured and when I inspected front tyre thought I saw bubbles. I waited a few minutes and tyre had not deflated. I wonder if I’d ran over a snail or something?! With no valid reason to stop, I started to climb. And climb. And climb a little more. Wow, I was crossing the Gospel Pass. This Pass was awesome – very high up with amazing views of green land and hills, valleys, sheep and these very weird miniature horse things! 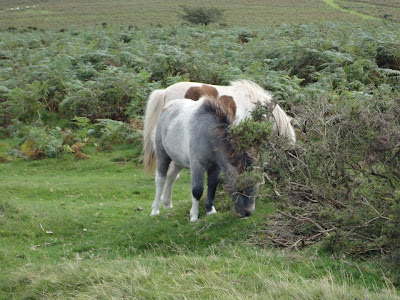 For a moment I thought I was hallucinating, but no, these really were miniature horses! With a name like ‘gospel’ and such amazing views it was impossible to not think about God and his awesome creation. And thanks to God for equipping me with the senses I have. Amazing! 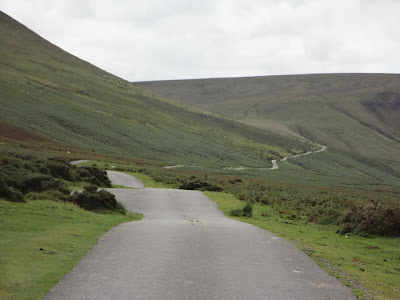 After the slog up the Gospel Pass came the descent to Llanthony. Whoosh! A super-fast and long descent. Not flat out fast, the rain from previous few days was caught in puddles and occasional debris covered the roads. Little effort required to reach Llanthony, but greater effort required to find control. The ½ Moon Pub was closed and the other available control (Abbey bar) was hidden from view. I cycled straight past control and after a few k’s I hailed a cyclist heading towards me and asked if I was near Abbey bar. I wasn’t – I had cycled past it. This cyclist kindly led me back to where the Abbey bar was (opposite ½ Moon Pub) but I struggled to follow as he was cycling so fast (showing off I reckon!). Finally reached control and wow, how pretty it was. It was, as name suggests, an abbey. Well the ruins of an abbey anyway and the bar was in what looked like a cellar, but ‘abbey shaped’ if that makes sense?! (I will re-visit and take photo’s one time – I’d love to take my wife here). I purchased beans and egg on toast here (needed proof of passage) but strangely didn’t feel like eating. Maybe the effort to climb Gospel Pass had messed me up?! I ate the toast and egg and gave the beans a miss. A cold coke and I was off once again.

Am struggling to remember next stage in detail but hilly it was. Like the previous control, I passed through this one (Grosmont) without realising. When I knew I was past control I back tracked and found a little sign ‘Grosmont’ – I took picture of same for control proof. This control was actually an information control, but I couldn’t find the pub to name it! I continued in the beating sun passing through and stopping at the control in Monmouth. Monmouth was real pretty but was nearly missed. The route sheet led across the Monnow Bridge which looked closed (building work taking place) but I fought my way through all the same. Large choice of controls at Monmouth and was initially hard to make a decision. I spotted a Café Nero and made this my choice control. SJ likes the café and at times will buy me a cake from here, so this was the obvious choice. A wise choice indeed – I was able to bring my bike inside and the tea and praline biscuits were delicious!

Left Monmouth and the sun was continuing to shine bright. This stage was only 22k long and was easy to navigate essentially passing the Forest of Dean and signs for Gloucester before finally reaching Cinderford. I stopped at a gas station for control purposes and downed a nourishment drink and 2 small pork pies. I ate very little (for me) on this audax. 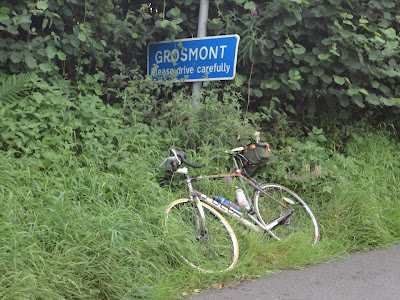 The final stage led from Cinderford. This was a lovely stage and reminded me of the start. Fast roads were followed (lovely descent) and the heavens opened again! The rain beat down real hard this time and the skies blackened. I stopped in a bus shelter to layer up and turn lights on. Despite the roads being flooded, I continued to zoom along at quite a pace and reached Cheltenham, the arrivee, about 11.5 hours after first leaving it! What an awesome ride!