Christmas is coming and I'm getting fat... 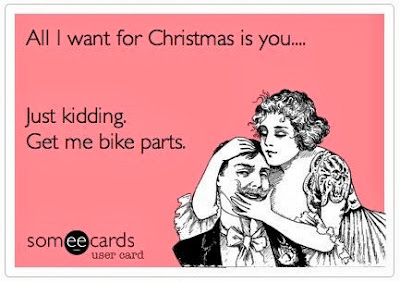 Only cycled twice this week. Both trips out were using Kay O, my trusty single-speed road bike. She performed great now that she had her rear wheel straightened out. The saddle still remained uncomfortable - the lambs wool saddle cover I purchased was way too big, must have been designed for a fat bottomed girl! First trip was a blast around the AM SR 1 route and the second was a nice trip out to Earlswood Lake.

I was Tim 'Tool-man' Taylor again this week too. I was having trouble with my BB on my MTB. Most folk will know that BB stands for bottom bracket. Perhaps it should stand for bloomin' bother! Most folk will know that my DIY skills are poor. Sadly this was proven when I faffed about changing my bottom bracket. It took me forever to get the BB off and then an age to get the new one on. Once on, I realised the chain wasn't over the chain ring so had to do it again. Then my gearing was out on my front mech big time. I thought the gearing was perhaps out because I hadn't added the 'shim thing' for the 73mm cartridge shell. This shim was deliberately not added because I did not see one present on the old BB I had just removed. Suffice to say, I removed and refitted the BB with the shim thing and things were better. Can honestly say that I can now change a BB. However, the gearing was still out a little. The front mech just didn't push the chain over to the large chain ring - I think it would have if I didn't mess around with the cable after the second installation. Oh well, will have to ask someone to take a look at it - like I should have done in the first place!