Happy New Year to my family, friends and readers of this blog. Hope you had a great 2013 and hope 2014 blows your socks off! Let's kick off this New Year with my latest blog post.

I'd like to start this blog with a picture of my feet. Some might think that's strange but I am hoping these feet will take me lots of places on numerous adventures. Without further-ado the picture is presented below:
As one can see, these poor feet are carrying a 92.7kg load. That's just ridiculous. I know I am a strapping bloke who stands tall at 6' 2'' but honestly - 92.7kg! That equates to a BMI of 26.2 which means that I am officially overweight. A pork chop. I hope to look after my feet a little better this year and will try and reduce their weight bearing load.

My feet took me a lot of places last year as followers of this blog will know. For anyone new to this blog, or for those who'd like a re-cap, a heat-map of my cycling adventures is presented below. Pretty eh?!
Last year, I had lots of plans and ambitions for the year ahead. This year I still have a few plans and dreams but am not going to be quite so anal. That doesn't mean I'm not going to be geeky though. In a nutshell, I would like to complete further AAARtY and RRtY awards, would really like to complete an arrow event and hope to muster up at least 25 hilly (AAA) points. I understand that the last sentence just typed won't make a lot of sense to a number of people but the audax junkies will catch my drift. As ever, I hope to be a great dad and husband just like my father before me.


My first cycle ride of this year was a 200k audax entitled 'Mr Pickwick's January Sale'. I think this was my first ride of last year too. Just like last year, I cycled this event with my buddy Chris Hodge. My GPX track is presented below:
We chose to start this event at 8 a.m. whereas the majority of others started at 7 a.m. This was good logic as we missed the earlier rain and now it was light too. We mostly rode the first stage with 2 others - a cyclist donned in bright orange gear and an older man. Chris and I chattered our usual nonsense throughout this first stage and at times would chat with the other two also. Funny thing was, the older man I was chatting with, I already knew quite well (but obviously not well enough) but it took me (and him) 40k before we realised we knew one another. The older man in question was Steve Poulton. Ha! This first stage took us through many flooded areas (this was a pattern throughout) to Rowberry's  Farm Shop. At the Farm Shop we had a great audax breakfast of beans and eggs on toast. A handy heater partially dried out our shoes, gloves and buffs too.

Stage 2 was largely on familiar ground and I wasn't far from home. We cycled part of Ron's TROAD route in reverse. This meant we had a bit of climbing to do but then flew down Cobley Hill. If weather conditions were better we could have gotten airborne after hitting the hump back bridge at speed. Following this we had the Weatheroak Hill climb, a favourite of mine using the single-speed. Further flooded roads took us, eventually, to the next control - the M40 Warwick services. 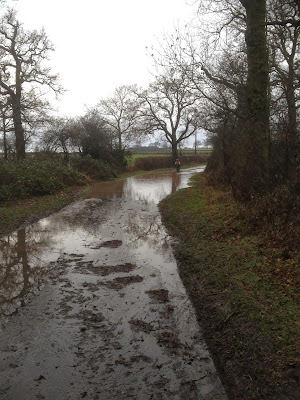 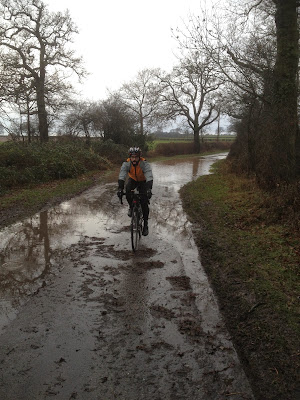 At the services we devoured a rather large KFC meal. We didn't feel drained so much, but wanted a relatively lengthy stay to dry our shoes out and get feeling back into our feet. KFC napkins and toilet paper filled our shoes with limited effect in removing water. We bumped into Steve again here who had bounced the last control. Feeling suitably fuelled we set off again. 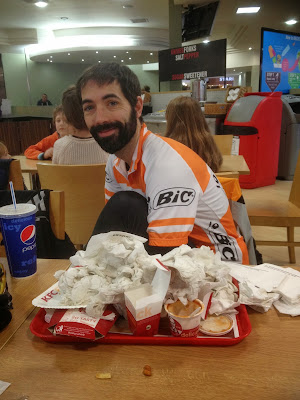 Within 10k of leaving the last control we hit a big fat climb. This climb was Edge Hill. A tough 14% climb were full bellies. Strangely, Chris said he enjoyed this climb. We both enjoyed watching the sun-set once over the hill. God had painted the skies with some beautiful colours this night and many sights were purely awesome. 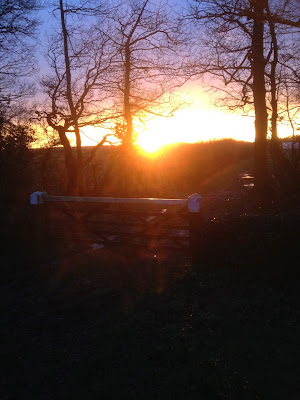 Once we reached the info control the sun had more than set and it was now dark. All the info controls gave us an excuse to stop and eat delights that Chris had brought with him - nuts, fruit, flap jacks or dark chocolate. We continued on into the dark and found our way to the next control, the Old Mill Cafe in Chipping Norton.
We bumped into Steve again at this control. The cafe was closing up to my disappointment but the staff were friendly and offered to fill up our water bottles, let us use the loo and stamped our brevet cards. Chris and I wanted a break so we ate his home-made jam sarnies in a bus shelter opposite. After a banana and some biscuits, we were good to go.

About 10k into the last stage we passed a cyclist who had decided to abandon. Bikeability man (as he addressed himself) had a wonky crank set and said he didn't feel like climbing the reminding hills with only 1 leg. How accurate he was about the hills! The last stage was very undulating indeed. Steep climbs and fast scary descents. As we reached the summit of one climb, I said to Chris 'perhaps this is the super fast ring-twitching descent' and before I could think further - whoosh - it certainly was. Some descents were proper spooky because as we flew down them we would occasionally hit some fog and visibility disappeared. It was great to see the lights of Tewkesbury and gently roll down into them to finish. Once at the arrivee, we caught up with the organiser Mark Rigby and rewarded ourselves with super 'spoons noodles. Job done!