This week started with a 200k audax. This audax was the Banbury Cross perm organised by Steve Poulton. Have now completed this audax a number of times but perhaps not in weather as dire as this occasion.

I needed to complete a 200k event to keep my RRtY award going and I still had to cycled about 250k to complete the Rapha (menace) Festive 500 Challenge. The things cyclists do for a pathetic woven badge. On with the story…

Started the Banbury Cross Audax from Broadway on a dark, wet and windy morning. Was so hard cycling as the roads were water-logged and the rain would beat hard against my face. The wind and rain was hitting me sideways. I kept telling myself 'at least the wind isn't head on' and 'it'll be sunny later'. This was a good mantra as I climbed Cleeve Hill.

Reached Cheltenham and was soaked through to the skin. It was a menace taking wet gloves on and off just to buy a chocolate bar for POP purposes. Not long after leaving this control another climb had to be beat. The rain and wind continued to beat hard against me but from the other side now. Had started to get worried about time, my average speed was only 17kph. Oh, and the hills appeared relentless in this weather. I suppose now is a good time to demonstrate the hilliness profile of said route.
Was pleased to beat these 2 first hills as I knew the route should be gentler for a while now. The profile might have been gentler but the weather got worse. Once I reached Cirencester I decided to stop. I was not at a control but the last so many k were fighting into a headwind and I was soaked through to the skin. A convenient McDonald's was found. So better I felt after a breakfast and after I used the hand drier in the gent's to some-what dry my shoes, socks, gloves and buff! Left McD's and battled the weather again. On all previous cycles of this audax I have always taken a wrong turn before Latton, this time I nailed it and followed the correct route perfectly. Decided to bounce the control at Cricklade (due to time constraints plus my eat at Cirencester).

From Cricklade to Witney the weather had started to improve. My feet were still wet but at least there was no rain and wind beating against my face. Perhaps I was in a tail wind as my average speed had picked up to 20kph by the time I reached control. Was great to reach Witney because I was now half way and had reached a favourite cafe of mine. I sat down to eat a mini (but trust me it was huge) breakfast and phoned my wife. Is always good to hear SJ's voice.

Left Witney and cycled straight to Banbury, bouncing the control at Bicester. Always amazes me how many airfields are passed on this route. I guess it was too windy for most air craft to fly but at one point I saw army helicopters overhead. As is my usual practice, I took a picture of the horse at Banbury Cross next to my steel carbon horse. (The horse is more spectacular than the cross). 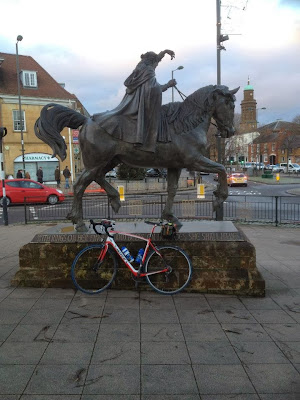 The return leg from Banbury was the most undulating section for sure. By now it was dark again too. I deliberately chose an alternative route back and didn't follow the route sheet (following road signs to Broadway instead). Distance-wise there was little difference. By taking this alternative route I had a big hill to climb but… (drum roll)… this led to the top of Fish Hill! From the top of Fish Hill came a super fast, ring-twitching descent all the way back to the arrivee! Is nice to finish a tough ride in this style! Below is the GPX track of my route.
By completing the Banbury Cross audax meant that I had only another 45k to go to complete the Rapha Festive 500 challenge.

My final Rapha ride was with Ron. We cycled a good old jolly ride that kinda formed a figure of 8 pattern. The route is presented below.
Woo Hoo! Had completed the Rapha Festive 500 challenge. What a menace that was! 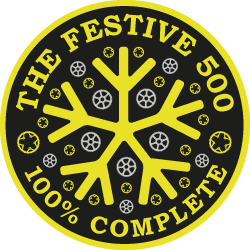 At the start of this year (2013) I had certain goals I wished to complete. Am very pleased to say that I have achieved them all. My biggest and best achievement was that I became a dad! My beautiful wife (SJ) gave birth to our beautiful daughter Lunar in February. How blessed we both are.
********************

On the cycling front, I had wanted to cover more than 4,309 miles (the total distance cycled in 2012) and hoped to cycle 5,200 miles (about 100 miles a week). I shattered this and cycled a total number of 7,766 miles, the most I have cycled in any one year to date. That's about 1,000k a month! For the audax geeks (of which I am one) I completed my SR, RRtY and AAARRtY series and successfully completed LEL.

For those that like stat's, below are my cycling distances in km's since I began recording them (figures in brackets are miles).

A big thank you to all those who have read my blog and/or joined in any of my adventures over the past year(s). I hope you all have a wonderful new year. Hopefully wheel catch up in 2014!