This week started well. Almost as soon I was up and out of bed, I went for a cycle. The weather was pants but it was nice to be back on my single-speed machine. Cycling along my AM SR 1 route seemed a tad tougher than usual and caution had to be exercised due to the large amounts of ice and slush covering the roads in places. The return leg saw the heavens open but at least the roads were not flooded like elsewhere in the UK. Once home, it felt like I had been rewarded for my cycle because the postman had delivered my Rapha Festive 500 roundel! Woo hoo!
The Rapha Festive 500 roundel was awarded for cycling 500k during 24-31 December last year (2013). The horrid weather and my adventures in the cold and dark suddenly seemed worthwhile. The roundel came neatly packaged in a small black packet with an accompanying post-card with lots of stat's printed on same.
The reverse of the post-card had a printed message congratulating my achievement. Nice touch. This is my only Rapha award to date.
Continued with my running this week too which made me feel good. My first run was especially super as SJ joined me! We ran the Studley triangle - this being SJ's first run since giving birth to our lovely daughter Lunar! Talking of Lunar - we ran past her on route, my dad was taking her for a stroll in her pram. How cool was that - a run with my 2 girls!

Third adventure of the week was a cycling affair. Ron and I took our MTB's out on a very windy and wet day. Most of the UK had weather and flood warnings on this particular day. We decided to cycle the Reed route and almost straight away we were to witness the power of the wind. Several tree's were broken and blown straight over and debris covered the roads, especially around the Studley Castle area.  We were cycling on flooded roads and it reminded us both of our Bear Bones adventure. The flooding was bad but not particularly deep up until Great Alne. Ron wanted to continue to the ford in Coughton and said he could hear the ford beckoning us. All I could hear was the strange sounds the wind was making. I informed Ron that Coughton must be flooded for sure but he didn't heed my predictions. We continued and suffice to say, I was right. As we headed towards the ford, river and road became one!
We feet were freezing cold after wading through the river. Once the ford was passed we were again on dry ground and had an easy pedal back home. Just for fun we decided to cycle through alley-ways wherever possible.

So many adventures this week that I almost lost count. Thursday was a double-whammy! In the morning I cycled and in the afternoon I ran. The day was beautiful and dry, though flooding was still evident in parts. My adventure first took me from home and into Redditch. A quick stop in Redditch to drop off Aid's Xmas parcel (somewhat late) and Angelina's birthday present before making my way to Evesham. On route some sections of road were closed and machines were pumping water - flooding perhaps. Reached the bridges in Evesham but there was no passage across, for safety reasons they were closed. Booo! I decided to cycle through the park and once more, river and road (well, foot path) became one!
The return journey home was fine, no mis-haps and no bother. My poor bike looked pretty filthy by end of ride though and to be honest, I had not cleaned her in ages. I figured this would probably be the last ride on this machine before the impending Snowdrop Express 123k audax next week. With that in mind, Kay O had a complete wash, degrease and lube! She now looked (almost) brand new.

'Cleaning a bike's like cleaning a toilet. If you do it regularly, it's fine and easy. If you wait, it's a truly disgusting experience.' (Steve Gravenites).

In the afternoon, I swapped bike for running shoes. SJ ran with me and we completed the Studley triangle in the reverse direction which was nice. Note to self - don't disturb the Mrs when she's in 'the zone'!

Friday was the last day of adventure and saw me run another lap of the Studley triangle. I deliberately pushed myself a bit harder on a couple of up-hill sections. It appears my pushing was worthwhile as my pace was 5.34 mins/km which is my fastest yet (this year).

Would like to conclude this blog post with a 'Where's Wally?' photo. This photo was printed on the inside cover of the latest Arrivee magazine and was taken during the prologue stage of the 2013 LEL. Myself and my buddy Chris ('Wally') were part of the pack. Is hard to find Wally and myself but if you look at the photo carefully you will see 2 arrows pointing to Wally and I. Is so bizarre that blog content on my website and Chris's is oh so similar. Isn't that a pip?! 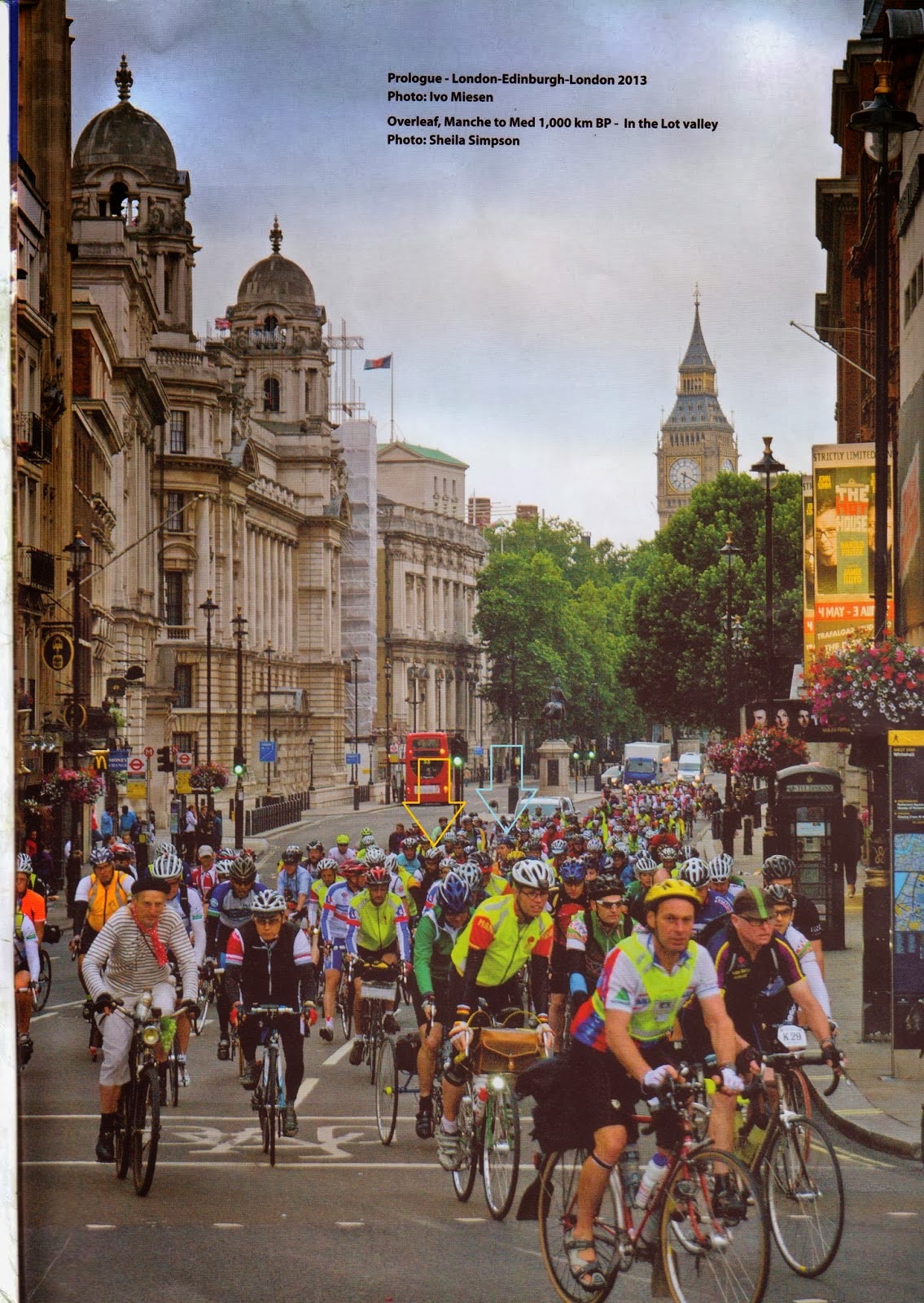 Ran a total of 15.3 k this week and cycled 134k - yay, finally managed to cycle over 100k in a week! Still have not cycled total distance of over 1,000k yet this year but hopefully this target will be passed by end of next week. More adventure awaits!
at February 16, 2014