Last week saw me complete the Easter Arrow to York or the Easter Fleches to York as it is also known. This was an audax event with a complicated set of rules. In a simplified nut-shell version, it was a team event that covered 400k in 24 hours. I have attempted to recount my experience below.
My buddy Chris came over the night before and we readied our bikes in anticipation. As usual, I was going to use my Specialized Roubaix and Chris his 'home made' machine. The chain stay on Chris's bike had a nice encouraging quote. 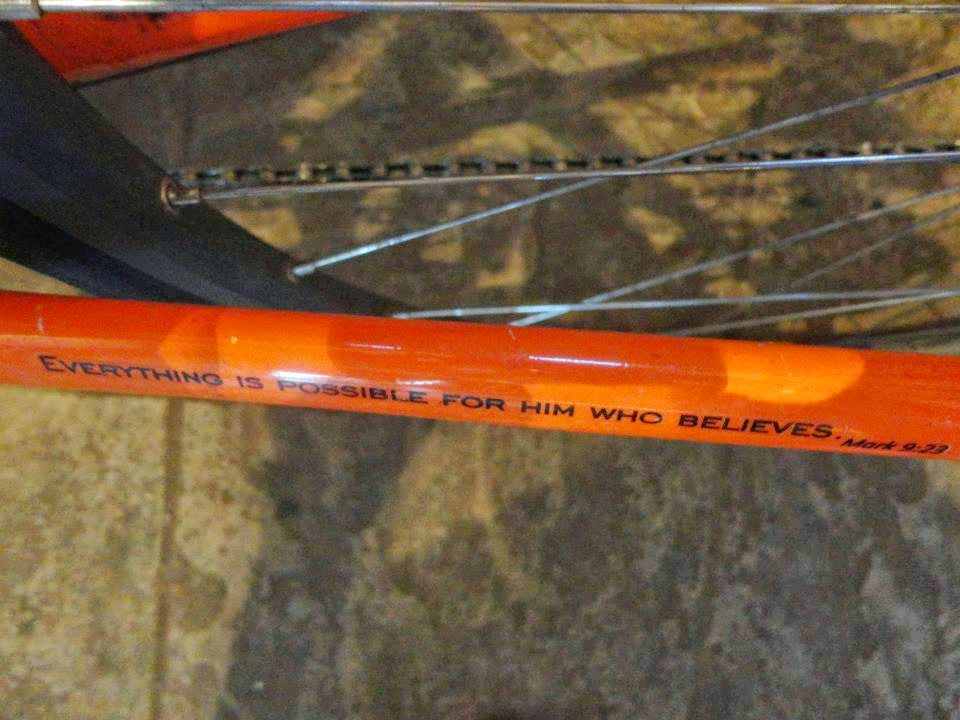 The rest of the team gathered at my abode 'Doo Little', just before 8 a.m. on Good Friday. My wife SJ made sure we started our adventure in the best possible way and made us all a cup of tea. Not sure what baby Lunar made of the lounge being full of lycra-clad folk.
Our team was called 'The Long Distance Lumox Lads' and (from L-R) consisted of Ron, Doo, Chris, Jamie and Andy. This was the first time any of us had entered an arrow event. This was going to be the first time Ron and Chris had ridden a 400k event.
At shortly after 8 a.m. we were off! It was initially quite chilly despite being sunny and bright. Jamie and Andy had already cycled from Birmingham to reach Doo Little and now we had to cycle just a few k more to reach a start control in Studley. HSBC ATM was our first control proof. From first control we had a nice, mostly country lanes cycle to our second control in Alcester.
Despite having breakfast less than 10k away, we all fuelled up that little bit more here in Alcester. We didn't stop long before cycling more gorgeous countryside. Our next stop was Edstone aqueduct - the largest aqueduct in England!
This stage of our adventure was quite varied - we would cycle along roads, cycle lanes and tow-paths. In fact much of our adventure was like this. Occasionally we would cycle through parks and share paths with walkers but no real menace was encountered at all. 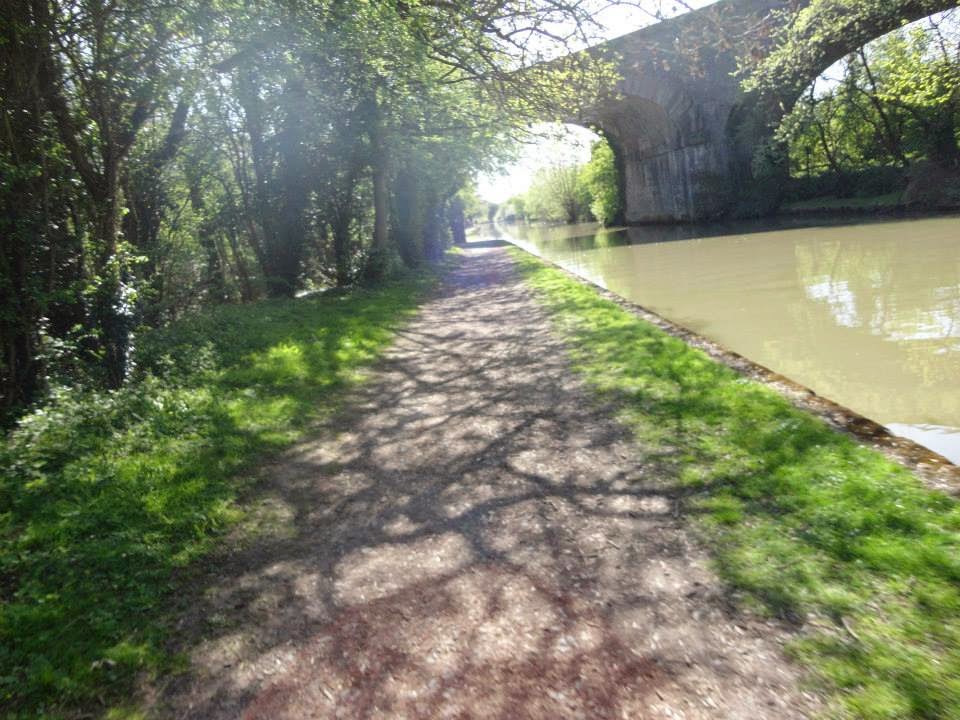 Before reaching our third control in Rugby, we cycled past the iconic castle of Warwick. Such a beautiful castle and such a beautiful day. A stop for a snap was considered essential.

Rugby was to be our breakfast stop. We found a cafe but they were not serving breakfast because it was Easter. (Don't folk have breakfast during Easter?!) We continued a little way and were stopped by a local Vicar who gave us some hot cross buns. The buns were delicious but were not quite enough to satisfy our hunger. A 'spoons pub saved the day and provided our first fry up of the adventure.

Our next stop was to be at Great Easton. Up until Great Easton we didn't cycle more than 60k between controls. The weather was nice and only the persistent head wind was menace. We were expecting a cash machine or similar to be used as control proof but we found an awesome little pub instead.
We were served to drinks and snacks by a couple of bunnies. This pub certainly had the Easter spirit! Some folk even said that they had caught a glimpse of the 'Easter Bunny' himself outside…
After Great Easton it was a 60k trek to St Ives. Well, we were not 100% sure it was St Ives - according to the route planner it was but at our destination point it said St Ives was 2 miles away. It mattered little really as there was few suitable places for control purposes anyhow - a random shop between destination point and alleged St Ives was used for proof of passage. The nearest pub 'The Cock' was overly expensive so we continued just a little further and stopped at the Axe and compass (I think). We had to wait about 30 minutes for our food but it was a worthwhile wait! We all had an amazing burger with fries. Mmm delicious. I layered up here too as it was now starting to get chilly as the bright weather and light was starting to fade.

St Ives to Kirton was our longest slog at 83k. We cycled a lot of flat road here but being so dark it wasn't so spectacular. I remember the same roads during LEL were more exciting - that was probably due to 100's more cyclists occupying the road and an awesome tail wind. At least I was able to test out my new dynamo light - an exposure Revo MK 1. I have to report, my light was truly awesome - the whole team agreed.
We were all looking forward to a curry at the control in Kirton but when we finally arrived the curry house turned out to be take-away only. It was cold now and we wanted somewhere warm to eat and freshen up. The pizza shop said they were closed but they were obviously open and just wanting to shut shop. I spotted a Chinese take-away that said it closed at 10 p.m. but looked open despite being 11 p.m. Indeed it was open and it was a most awesome shop too!
A very kind Chinese guy welcomed us all in and allowed us to sit down while he prepared the most delicious dishes imaginable. He left these dishes open and provided us with forks and chatted to us while we warmed up and ate. He also took the above picture and treated us to free drinks. I so wish I took more note of the name of this establishment and the owners name. The only thing I took was a rather shady photo of the nice guy.
So nice it was to be fuelled up as we headed out into the cold and continued our journey. Don't remember too much about this stage, only that it was long (about 70k), dark and chilly. I gave Chris one of my socks as he said his foot was frozen solid.

We finally reached Market Rasen at about 3 a.m. A local pizza joint was located and we thought this would be ideal for control purposes. A policeman was outside and we felt that our bikes would be safe under his supervision. Once inside the shop we ordered pizza and warmed up our feet. And then it got rowdy as lots of drunken hooligans and the like filled the premises. Some folk were nice and interested in our mission, others were clearly drunk. Mr Police dude made a few trips inside and out and kept control of the chaos.
Once we were fed, we continued into the darkness. This was a long stretch to Pocklington and we saw the night turn back into day. The Humber Bridge was crossed during this section too which was nice.
On the bridge we crossed paths with another arrow team but they said they were behind time by a good hour or so. We were racing time, this event was harder than any of us had reckoned. The head wind had slowed us down somewhat and despite not being overly hilly, we had a few ascents to battle.
We hadn't reached Pocklington by the 22nd hour so we had to find a 22nd hour control. This was one of those 'funny rules'. A local ATM in Market Weighton was able to provide us with the necessary proof of passage. Pocklington was not too far away and we raced to get there, ever conscious that time was ticking away. Pocklington was the penultimate control so we stocked up on supplies for a final time and then we were off!

Despite the last section only being 22k it felt a trifle longer. I had started to feel tired and much of my motivation had now wavered as my head-space was telling me that we would make it to York within the 24 hours. Chris and Ron still seemed to have fire between their legs and led me (in a more zoomy style than I cared for) to the arrivee, a lovely 'spoons pub in York. Woo Hoo, we had completed our mission with just 8 minutes to spare! As luck would have, Jamie and Andy appeared not long after. What a great adventure and what a wonderful team. Will any of us be doing this again? - I don't think so! At the arrivee we ate and drank and celebrated as is the usual custom. Some random lady called 'Crinkly Lion' kept us fed with her free cakes. What a bizarre end to our adventure!
According to my Strava log, I had cycled 425.5k in 18 hours and 38 minutes (and 49 seconds) and climbed some 1,764 metres. That didn't include my stops. As stated earlier, my control proofs recorded that I had just 8 minutes to spare!
Heading home was a long drawn out affair. Jamie and Andy left first. Ron managed to get an early train. Chris and I waited hours for a space on the train (not being able to get an earlier train). 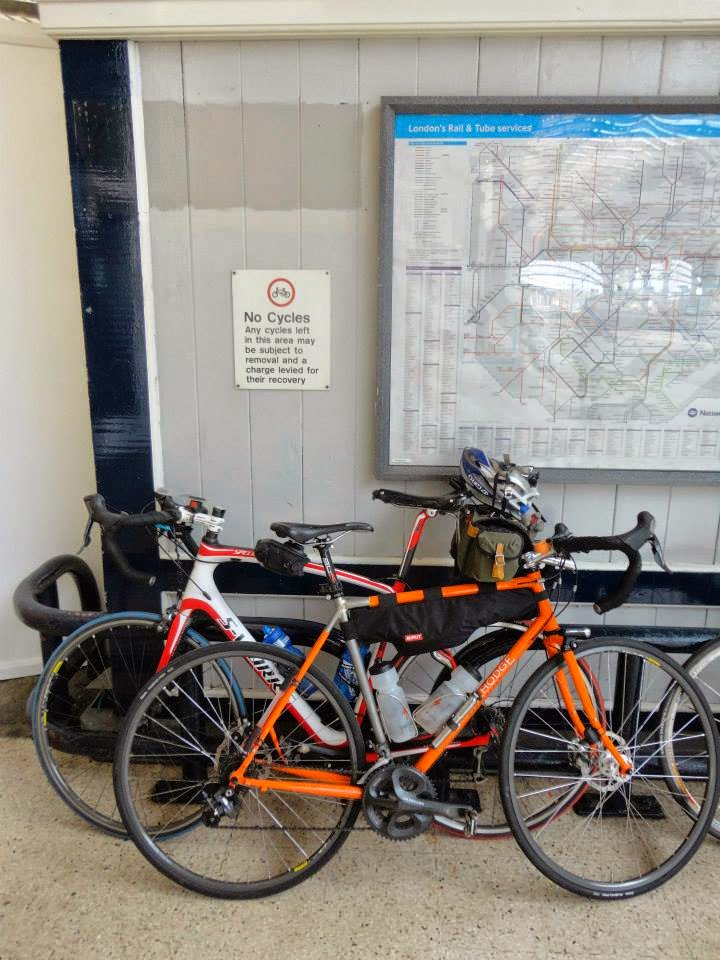 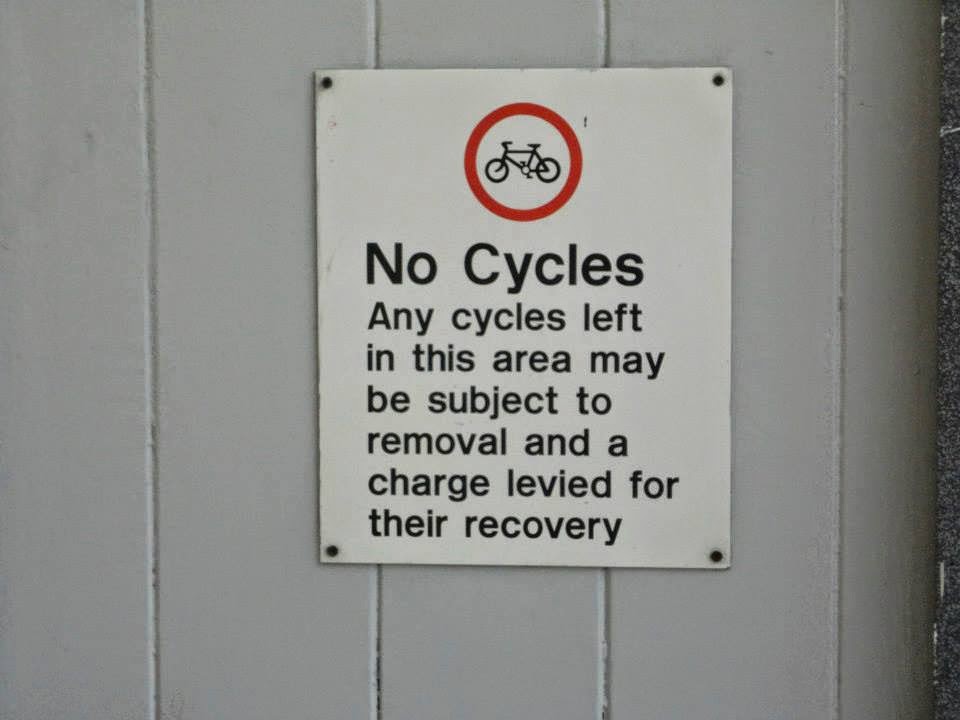 Bikeless and fancy free, I wonder what next adventure awaiteth me? ….