Monday: Following the 'chicken dance' that was performed at tri-club over the weekend, my legs were feeling quite achey breaky. For this reason, I decided to rest my poor pins. 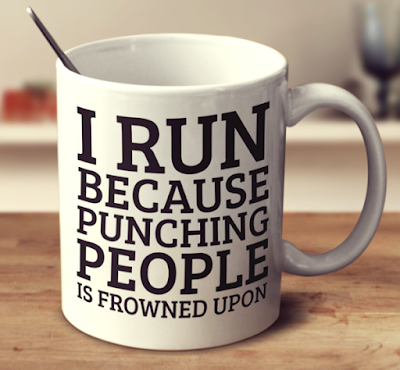 Tuesday: Ran to work commute style. Usual 10k. Felt much further today. And then, in the evening, I went for a dip! 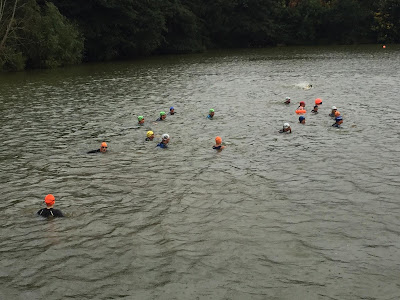 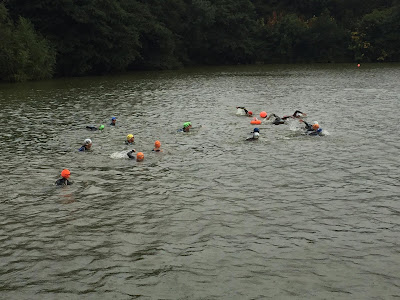 'Spitting in a wishing well,
Blown to hell,
Crash,
I'm the last splash'
Decided to take my last open water swim of the season at Ragley Lake. I glanced at the FaceBook page and realised I could turn up earlier than normal, so sure enough I got there for 5:30. What I didn't realise was (as well as a bunch of others) the fact I couldn't swim any earlier and worse still, the evening was gong to begin with races. Damn. The only way to get an earlier swim in was to race. I didn't race, but I entered the event. The event was entitled 'Splash and Dash' and was a 400m swim followed by a 3k (I think) run. I swam but missed out the running part. My swim was slow, as usual, the results of the race are presented below. (Hey, I didn't come last!) 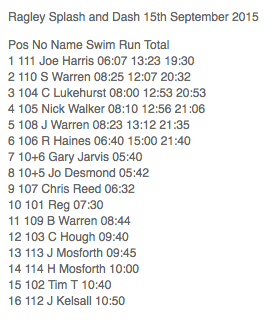 After the race, I went for a second lap of the lake. These laps were only 400m circuits because we were not allowed to swim the full length of the lake today. Probably just as well - the water was the coldest it has ever felt and I was suffering cramp again. Before next season (and my impending triathlon events) I really must learn to swim and figure a way to combat this cramp! Hmmm.
Tim Tom Tom Tom testing complete. Will blog about this another time when I can get around to it.

Wednesday: Had hoped to go for a cycle with Ron. Sadly, the weather turned foul. Today was a victory for the foul weather fairy.

Thursday: 10k run commute. Interval style. Followed the formula: Warm up 10 mins; 6 x 800m run (with 400m recovery); cool down to finish. My legs (calves) really ached and had done since I went swimming. Not sure why my legs ached so much, only swam 800m. 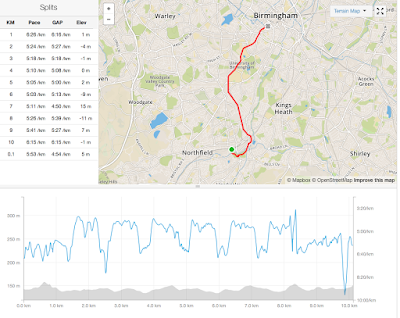 Saturday: Long run. 1/2 marathon distance. I started this run from Edstone Aqueduct. My wife and kids kindly dropped me off on this really quite misty morn. 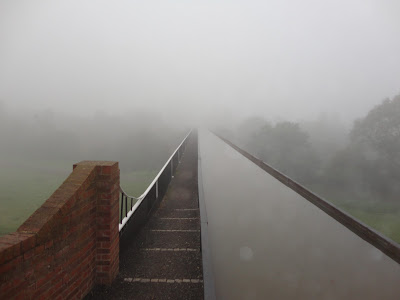 My run followed the tow path all the way in to Stratford. On a previous run, I told myself that 'one day I'll run across this bridge'. 'This bridge' being the one I photographed below. 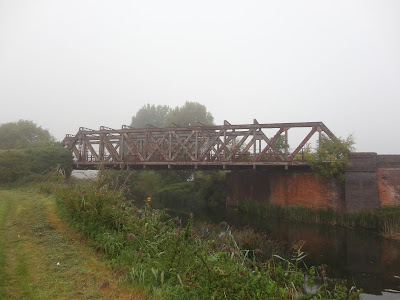 Today, I ran past this bridge and then turned back on myself and started running in the opposing direction. I had joined the Greenway. The beautiful bridge was now in front of me. 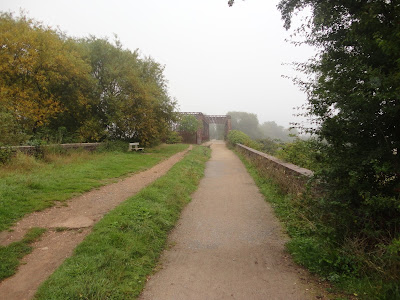 The promise to myself was kept. I ran across this bridge. Oh what a lovely bridge it was too! 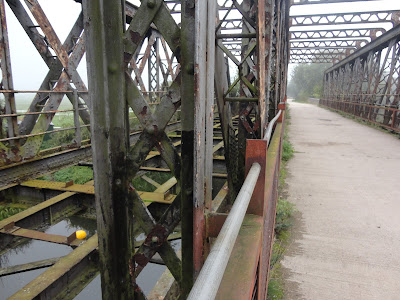 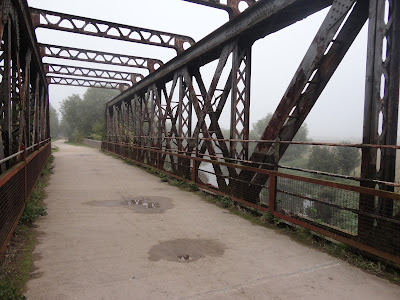 I continued along the Greenway until it reached it's end (or start). One day I'd like to run the whole length of the Greenway despite not knowing how far it stretches. Just at the end (start) a rail carriage could be seen which had been converted into a cafe and bike hire shop. Pretty. 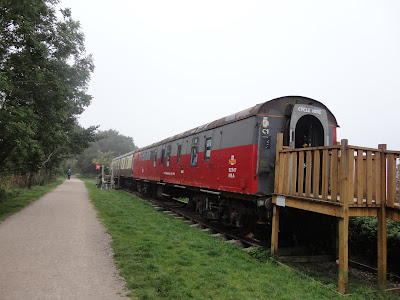 My run finished by running back into Stratford Town Centre. I ran along various streets and basically ran until I had reached my desired distance. SJ and the kids kindly picked me up. As was becoming our custom, we had a post run feast to celebrate. SJ had ran around Arrow Vale as part of a couch to 5k initiative.
Sunday: Tri-club day. Session started with swimming. Better than last week - 3 more lanes and more attention! My swimming is still pants but let's hope these drills helped a little. After swimming, we went for a cycle. 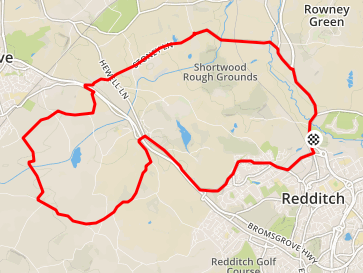 Before the cycle started, one nice member handed out Sky bottles and caps to us all. Very gratefully received. The cap was awesome and Rapha no less! I felt obliged to wear my new cap for the 22k jaunt we cycled. This was a relatively hard slog. The route took us in a rough circle but started with Cobley Hill. This hill is mean on a geared bike and was a proper beast on my single-speed. That was the first time I had ever cycled up said hill on a single-speed bike (and maybe the last). The ride wasn't too bad - I survived to report the tale!
at September 20, 2015