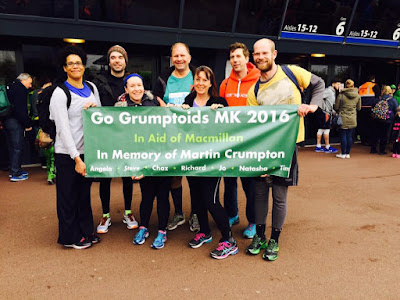 2 May 2016: This was a fantastic day. On this particular day, I was one of 7 Grumptoids running the Milton Keynes (MK) Marathon (or Half Marathon). The Grumptoids are a group of elite runners that ran this said event in memory of Martin Crumpton. As a group, we rocked! What follows now is a recollection of my story.

In the early hours of this over-cast Monday morning, a certain Elly Poole rocked up to my abode and kindly transported me to the start of the MK marathon in her automobile. We had a pleasant journey to the start and alongside Elly there was her 2 kids - Millie and Jose - and Chaz, a Grumptoid runner.

Once in MK, we were meeted and greeted by the remaining Grumptoids - Angela, Steve, Richard, Jo and Natasha. Gill was also there and joined Elly and kids as a super supporter. We were all buzzing and maybe a trifle nervous.

We all made our way to the start where we joined hundreds of other runners in a packed line. Felt quite warm being packed in like a tin of sardines. Waiting for the start horn/whistle thing we had a good chat and a bit of a giggle. We all found it funny that Tim Tim was written on my front (name on running number and running vest) and that Tom Tom was on my wrist (my watch). Some runners had some funky running vests - I particularly liked the Drumstick and Um Bongo tops I saw. After the start whistle thing blew we all wished each other well and about 6 mins later crossed the start line and began our race.

I stuck with Steve and Richard for a short while initially (as these 2 were running the full marathon) but soon found myself running alongside a 4 hour pacer. This pacer had a big orange balloon with 4:00 written on it. I figured if I stuck with him, I'd complete my marathon in 4 hours. I soon got bored sticking with this guy and his balloon kept whacking me in the head. I ran ahead and took in the buzz of this wonderful marathon. I briefly saw Angela and Chaz as we ran past each other in opposing directions but didn't see another Grumptoid then until the finish.

Almost from the start (and right until the end) people would shout, scream and chant my name. Many offered words of encouragement. Some would hold out their hands for a high five. Others would hand out sweets. This was fun. When someone first shouted my name, I turned to see who it was (thinking that they knew me) but soon realised this was just a marathon norm.

Running this marathon was a real emotional affair and at several times I felt like crying. I didn't cry but I felt my eyes welling up. The first emotional moment I had was when I saw the back of someone's running vest that stated they were running in memory of their little star in heaven. Another time was when I read another vest that said 'an hour in my arms, forever in my heart'. I wanted to hug these people but felt I hadn't better as the race had not long started and it might just look a bit weird. At other times the voices in my head 'bigged me up' and I felt like crying then too.

My head-space was mostly filled with thoughts of my wife SJ as I ran the course. I saw her complete the London Marathon a few years back and all the wonderful things she had described were happening here. Every time I saw a running vest like those described above, I thought about my kids. 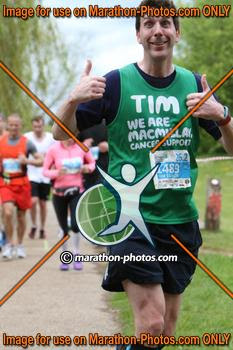 The course was lovely and what I saw painted a great picture of MK. The streets looked pretty and the parks were great too - reminded me of Arrow Valley. At the end of the race, folk asked if I saw the stone cows but I didn't notice them at all?! Was sure I ran past Stonehenge twice - apparently I did pass a stone circle and another set of ruins.

The weather was great on the whole during this run. It was windy but warm, bright and sunny. My face got a wee bit burnt from the sun. After we had all finished, the heavens opened. Think we timed things just right.

My only real tactic during this race was to consume a gel about every 20 mins and drink water whenever it was offered. The gels were very sickly and I must have consumed about 11 in all (I had 2 before the race). The water would come in bottles, I would take a few sips, wash my hands and cover my head and face in water and then discard the bottle. I had a few sweets offered en route too. I stopped for one pee break (this was the only time during race that I wasn't running).

Running this distance is crazy and you feel like you are playing cat and mouse with other runners as you seem to pass and then get passed by the same folk and then pass them again. I felt completely fine for just the first 10k, after that the niggles started and pain never really went away. Sure, I had some dark moments but the voices in my head forced me to continue running. Towards the end, maybe the last 6 miles or so, I wished folk would stop chanting my name. My head hurt, my feet hurt and I wanted to finish.

After so long, the finish was in site. I first saw signs indicating the MK stadium was near. Then I saw the stadium. Then I ran as fast as my legs would carry me into the stadium and around it to the loud clapping and thundering cheers of the no doubt Grumptoid support crew. 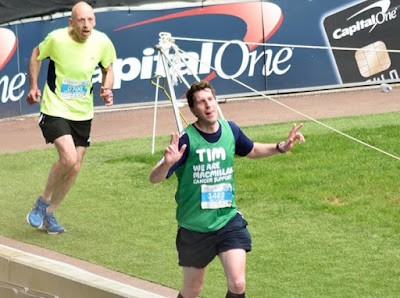 Wow, that was it! I had crossed the finish line. I had ran the MK marathon! Better yet, I had ran my 3rd marathon to date and this was a new PB (personal best), as I had ran my quickest time. My official result was 3:55:02. Super pleased with a sub 4 hours. And then I crashed to the floor and could not move very well for a heck of a time!

I was awarded with a rather funky medal. Other runners would congratulate me and asked if I felt ok - of course I didn't, I'd just ran a marathon! Some guy took my photo with me holding my medal - I guess he'd want big bucks for the photo at some point. 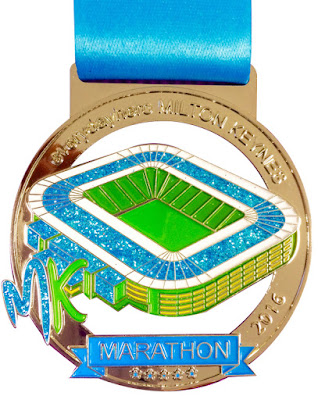 After this I wandered around like a zombie looking for the Grumtoid support crew. Natasha found me and led me to a seated are in the stadium where I got much respect from the Grumptoid gang. I munched on the crisps, Mars bar and banana that was contained in my goody bag and chilled for just a short while. Not long after, I joined in the roaring chorus of cheers as Steve and Richard had entered the stadium and were running with style. So awesome to see these guys finish and to shout and cheer! The Grumptoids had completed what they set out to do!
This was a lovely day and I'm sure I'll keep fond memories forever (which is a very long time). I enjoyed my time with the fellow Grumptoids and appreciated their support, friendliness, humour and banter. I never met Martin Crumpton, but I do know that we certainly did him proud!
We had much food and celebration to conclude our day. Go Grumptoids go! Then, I was transported home in the like manner I was taken - cheers Elly!

3 May 2016: Ouch. I hurt. Didn't seem to recover too well at all. Spent the day walking like John Wayne.
4 May 2016: May the fourth be with you. It wasn't with me! Was still suffering with achey breaky muscles.

5 May 2016: My legs still felt a little achey but I felt able to resume my Ironman training. Started the day with a swim. I swam for about an hour but my pace was slow and the pool was over populated. Once home, I went for a cross country 5k run. Running was a little difficult but I felt better than I did a couple of days ago! Finished the day with a lovely cycle to Broadway Tower and back on my Ironman bike. Surprisingly, I felt great and hence climbed both Saintbury and Fish Hill whilst out and about.

6 May 2016: Awoke feeling awful. Thought I had picked up a virus or something. An evil migraine stuck with me for hours. Felt bad for letting Roger down as I had to say 'no' to our planned tandem adventure which I had really been looking forward to.

7 May 2016: Ugh. Back to work. Still felt awful and have now contacted conjunctivitis too. Don't suppose there is much chance I'll be open water swimming tomorrow?!
at May 07, 2016