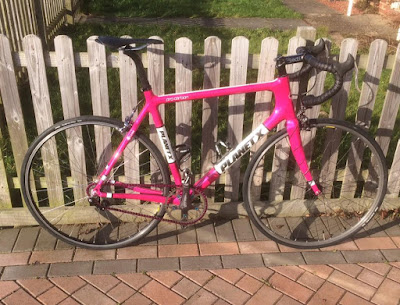 Monday started well. Got Pinky's issues all fixed up, well kinda. Pinky was built up a short while back but she didn't sound quite right when in motion - the chain/tensioner rattled like crazy. I had tried swapping chains and tensioners but to no avail. Pinky had a second opinion (and treatment) and now the rattle is more like a wheeze. The previous chain was stretched a little (so Pinky was treated to a new pink one) and the link rubbed a tad against the tensioner jockey cage. The tensioner jockey cage was disposed of. Noise still resonates but I'm informed that carbon will make noise resonate more so than compared to steel, and as the chain becomes bedded it'll quiet down a little more too. We'll see. At least Pinky is functional and looks great.

Didn't cycle Pinky on Monday though. Instead, I went for a run with the Mrs and saw her turn a similar pink colour to the bike. Ha! I'm real pleased SJ has started to run again.

Tuesday was spent on my trainer. Just couldn't find the time to go outdoors (we had a new door put in our lounge, bed delivered, blah). This spin didn't see me complete a stage of The Tour of Sufferlandria (have abandoned that tour) but I did attempt to complete a Sufferfest session called 'Rubber Glove'. I didn't finish - after 45 mins, I knocked my iPad off the shelf. D'oh! That's 2 attempts at 'Rubber Glove' with no success - maybe it's a sign?!
Wednesday was a great day. Caught up with my buddy Roger as we cycled his tandem for the first time this year. A relatively short (30 mile) adventure but great to be out in the great outdoors once again.

Rest of the week was mostly spent at work. Doing work stuff. Pah, who wants to hear about that?! I did manage to sneak in a quick (45 mins) spin on the turbo trainer. I used the Sufferfest App again and strangely, this time my heart rate and cadence was all fine. The App used previous data to 'suggest' my heart rate zones (which were actually lower than my 'real' zones) which made cycling in this virtual world a lot easier and way more comfortable. Maybe I should restart the Tour of Sufferlandria. Then again, maybe not. :)