Blooming awful week this one. Awful on the training front anyway. So much snow, it meant no bikes go.

To be fair Monday wasn't too bad and I managed a commute cycle to work and back. It was very cold but still rideable weather. The days that followed were awful. 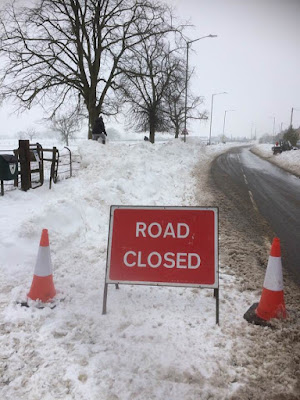 From Tuesday the snow started. Snow - no bikes go. I took to the indoor cycling trainer and managed 2 sessions over 2 days. These sessions were naff. The bike (or trainer) creaked like crazy which was really annoying and I could not find the creak. Was my bike damaged? Was the trainer bust? I don't know. Worse still, my cadence sensor was not working (maybe the battery was dead but no spare battery to check). I really don't like using my road bike on this trainer and wish I had a 'spare', 'trainer only bike', or 'heap of junk' to use on it. Anyone have a large road bike they would like to donate for this cause? Please.

The snow got worse as the week moved on. My mood dipped too. Fed up and frustrated that I could not cycle, could not run, could not even go for a swim. Man, I couldn't even drive as the roads were blocked. Could not get into work and little to do. Arghhh! 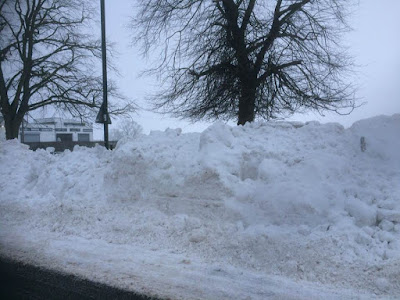 On the bright side, the snow was beautiful. It was awesome seeing the main road (A435) at a stand still with deep drifts of snow many feet high. No cars go! 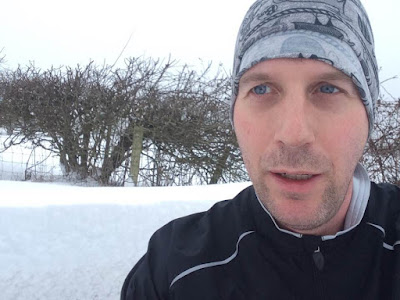 By the time the weekend arrived, I was proper moody. I needed some of those endorphin things. Usually when it snows, I am quite chill (ha). I think the fact that my training kept being hampered by illness, then weather just annoyed me so much. Only one thing for it...
Deep snow or not, I donned my trail shoes, put waterproof socks on my feet and ran! Wow, this was ace. Beautiful. Mood improved and I completed some exercise. The fields of Studley were awesome and it felt so great to tread in and hear the crunch of virgin snow.
Once home, SJ cooked some pancakes which was a real winner too. Pancakes with sugar, honey, banana and ice cream is sure to improve anyone's mood. Yum! 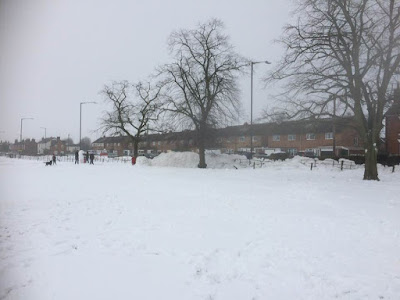 Having been over the fields once was not enough. I just had to take the wife and kids. This awful snow turned out to be just brilliant. Oh the fun we had! 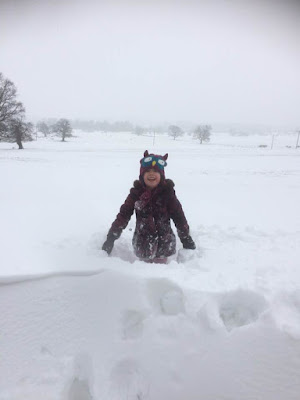 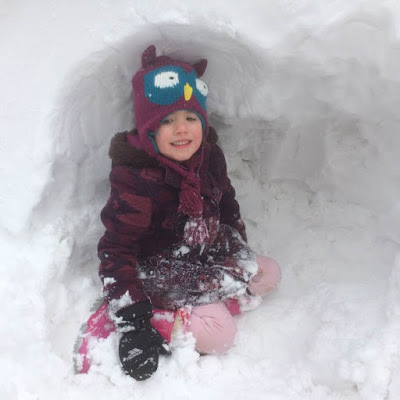 The snow had drifted and in places it was really deep. So deep in fact, that Lunar was able to reside in her igloo. How cool was that?! 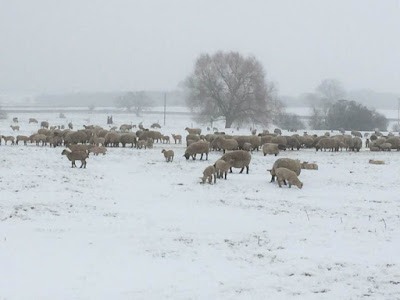 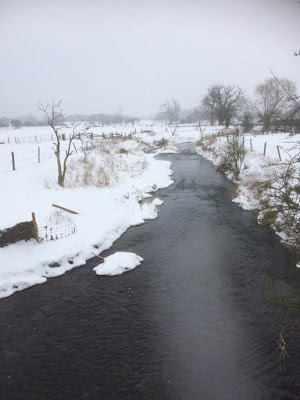 The poor sheep had to face the snow flurry's too. Such a shame it was lambing season. News reports suggested many new born sheep had died by being frozen to death. (As an aside, my mother reminded me of an incident some years back when I 'found' a mallard duck hiding by a snowman in the middle of these fields. I took said duck home, contacted a duck shelter etc - sadly he died 2 weeks later. Check the full story here!). 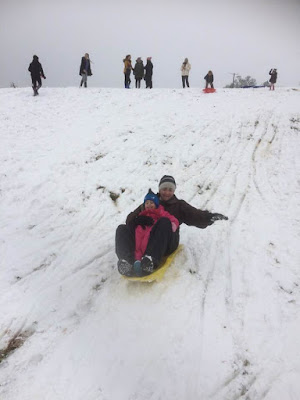 The high-light of the weekend must have been the sledging though. It really was great fun. SJ managed to sledge with both kids on board at the same time. Lunar was really brave and after a few runs sledged solo and loved it. I loved both watching and sledging. So pleased I kept hold of my sledge!

Sunday was a pretty cool day. Had a few family members come over. Aid was one such family member who managed to fix my alarm (bonus). I thought I had fixed the creak on my turbo/bike setup too - I could see the skewer was wonky.

Finished the week by jumping onto the turbo trainer and going for a quick spin. The creak was still there which was annoying. Hmm, maybe the skewer wasn't tight enough. As soon as my spin was over, I took a short run just to finish the week in style. Not much style really - had only cycled 109k and ran 8k this week. Next week is looking better, the snow is almost gone. Go bikes go! 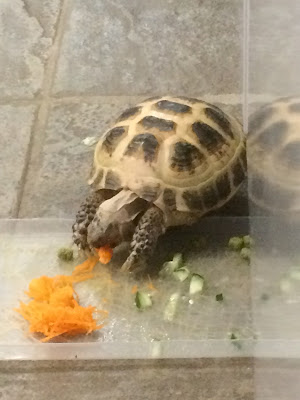 To end this blog post in style, let me provide an update on Mr Timster Wide-Eye. He has now started eating carrot! This is huge - since I've owned him he has only ever eaten cucumber and his food pellets. He has always turned his nose up at lettuce, broccoli, grapes and carrot previously. However, now he has come out of his shell and eaten carrot! Today was also the first day I have ever witnessed him having a drink. If all that wasn't wonderful enough, I even saw a video of a panda eating carrots today too (up until now I was led to believe they only eat bamboo. Oh the things we learn!
at March 04, 2018