At time of writing this blog post, I am probably the chunkiest I have been this year. A recent holiday was to blame. Despite vague thoughts and plans of running on holiday, it never happened. Not sure why I even bothered taking my running shoes and sports gear, it was never used. Instead, I had 2 weeks (give or take) living the life of excess. Much food and much fluid and little in the way of worries. 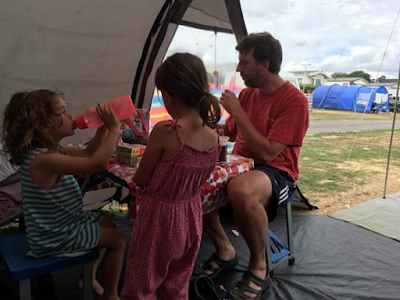 My holiday was great and it was so nice just chilling out with my homies. My parents were on the campsite too, plus my bro (Robin) and his kids, my cousin Aid (and his kids plus his brothers kid), oh and my Aunty Chris too. Already plans are taking shape for a holiday next year.
With time away from work, I was able to finish reading 'Pedal the Planet' by Breifne Earley - the guy who interviewed Jamie and I on our TransAtlantic Way Race. At time of writing, I have nearly completed 'Me, my bike and a street dog called Lucy' by Ishbel Holmes too. I seem to have a growing number of cycling related books by different folk and 3 of them are signed copies! 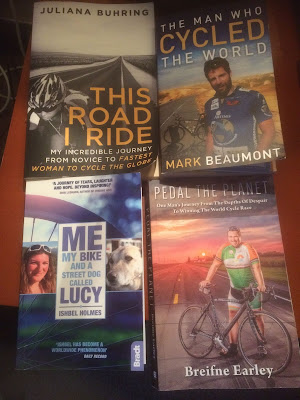 The first book (of this collection) I read was 'This Road I Ride' by Juliana Buhring. Probably the best read here. My mate Gary held a book signing in his shoe shop in Geneva and forwarded me a signed copy. Pretty cool eh?! 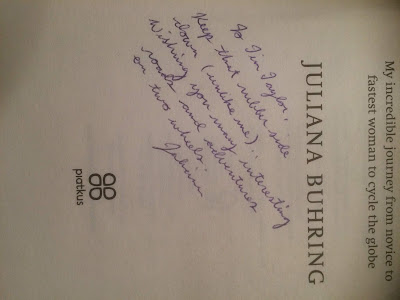 I found 'The man who cycled the World' by Mark Beaumont difficult to read. It just wasn't exciting enough for me, I guess. Ron and I have a planned charity ride (SIKA) next month and I believe Mark will be there as a kind of special guest. Hope he doesn't read my remarks here! Lin gave me my signed copy of this bike (which was actually signed for my children). 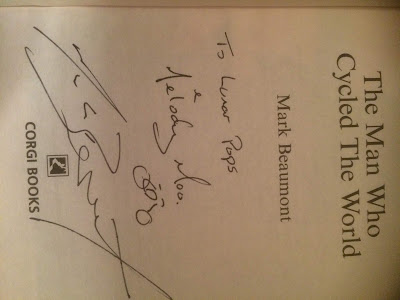 My 'Pedal the Planet' book is not signed. Who cares? Funny thing is, this was the only author I have actually met in person thus far! This is a good read and the story is great. 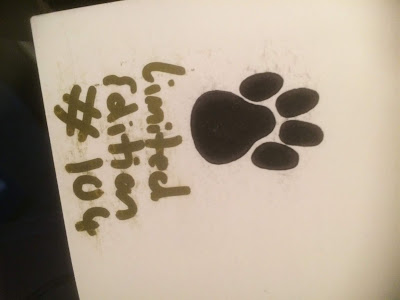 My copy of 'Me, my bike and a street dog called Lucy' is a signed copy and a limited edition. I follow a number of blogs and the authors of this book is just one. Am finding this a great read and should be finished by the time I post next. 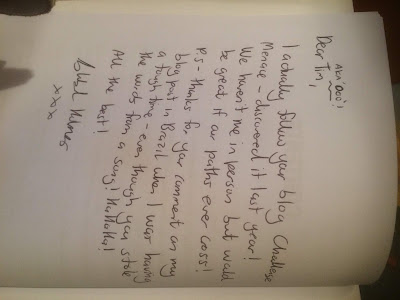 It's not all been holiday and book reading though. No indeed. I have since returned to work (doom and gloom). Despite the sorrow of re-starting work, I managed to complete my Randonneur Round the Year (RRTY) challenge on the weekend. Ron, Andy and I completed another rendition of my 'Wot no Cross' 200k audax which was my 12th consecutive 200k in a 12 month period. I have now completed 4 x RRTY awards to date and will be eligible for the 5 x RRTY award should I complete another one. I think I will have a few gap months before considering chasing this challenge and award again.
It was great cycling this audax with Ron and Andy again. We had only cycled the same audax about 3 weeks ago. This version had a lot of variation though. For one, I was fatter and struggled more. We kept the same controls (obviously) but I made a lot of changes with the route. About 99% of the route to the first control differed to the previous jaunt and was more lanesy and rural.
We took a rather splendid route to reach Winchcombe and even passed George and his dragon (I knew there be dragons). The descent down sleeve hill was ace - reached speeds of 72 kph and then we took the cycleway option to reach Cheltenham. Sure, there was a little dodge the ParkRunner but nothing to hectic. 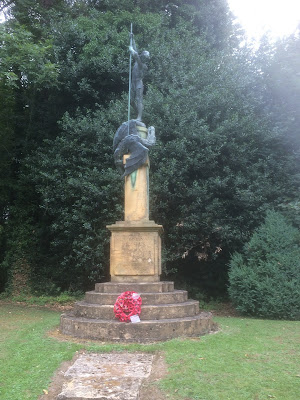 After dragon we saw lots of rabbits or hares? Not sure why but Cirencester was littered with them. I guess they do breed at quite a rate...

We had our usual stop at a greasy spoon type cafe in Cricklade where strangely, I had a smaller breakfast but my companions ate a massive one. They'll never be as fat as me! This proved to be an ideal cafe to fraternise with other cyclists.

Witney was the next control where we enjoyed tea and a spot of people watching. Folk appeared less weird and wonderful compared to our last spotting session. Maybe that was because we were more in Witney and less round the edge.

Penultimate stop was at Shipston, although this wasn't a control. Interesting folk were here too including a scantily dressed girl and a busker making an awful sound on his fiddle. A disabled guy went into the shop to change his tenner with the plan of giving the fiddle player a fiver, only he had departed by then. I think the fiver was only to stop him playing anyhow.

With much huffing and puffing on my part we cycled on and through Stratford. A little push more took us through Coughton and then finally back to Studley. We finished the day by celebrating at the Lark.

Next big ride will hopefully be the SIKA challenge. I'm sure a few cycle commutes and the odd 5k run will continue to make appearances on my Strava training log. Am hoping a fitter me scribbles my next blog post!
at August 20, 2018