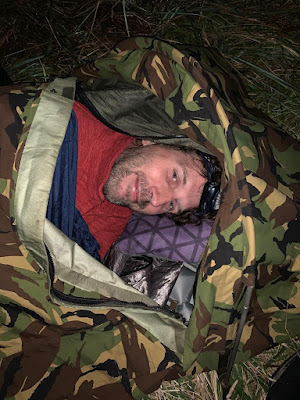 This weekend saw me complete the September month of my Bivvy-A-Month (BAM) challenge. Only 3 months to go until this challenge is complete. Hmm, just the winter months remaining.

A whole bunch of us camped on this occasion. The wild campers were Doo (myself), Rob dog, Robin and Ben. Aid and Tom also joined us for what was to be their debut wild camping experience. 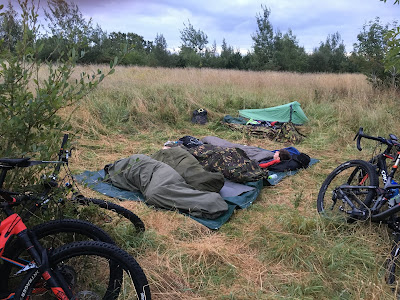 This adventure started at the Lark. Rob, myself, Aid and Tom figured we'd get a drink whilst we waited for Rob dog and Ben to rock up. Rob and Ben took ages, so we had many rounds of drinks which wasn't good or clever. At some dark hour of the night we ventured on towards our camp spot. 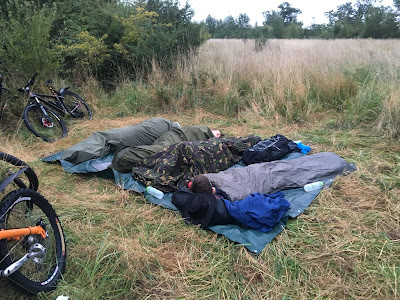 Our camp spot was decided my the majority and was going to be the same spot we camped at last month. Ben and I would have preferred a different 'new' location, but, whatever. We cycled as a group but not all of us had lights - not good and not clever. The 'rozzers' rolled past and told me I had no rear light, I replied that I did (but the battery had failed). They also informed that I had no hi-vis (however, I did have spokely dokely spoke reflectors) and instructed that I cycle in front of Rob (who had a rear light). They were kinda cool really and I was pleased that they didn't breathalyse me. 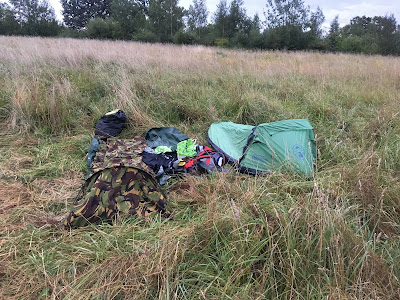 Once at the camp spot, we set up camp. Rob cooked some delicious sausages - Lincolnshire and Cumberland. The jury is out to which was nicest. We all had a 'night cap' and slowly settled down over the preceding hours. Ron was a bit of a monkey this night - I'll say little more for fear of embarrassing him. 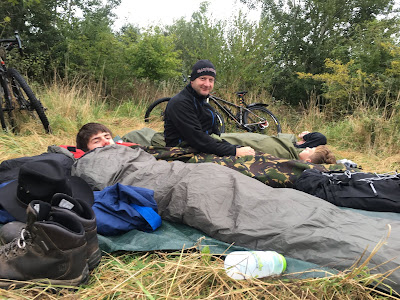 Morning came and how bright and lovely it was. Just as I started to climb out my bivvy, it started to rain. The rain didn't last long and it wasn't long before Rob was cooking breakfast (sausage and egg baps) and Tom and I were making tea. When Ron surfaced he wasn't too well. Ron was not good and Ron was not clever. Ron took home bacon and beans that he was too unwell to cook for us all.

All in all, a great camp. Next time I'm sure Aid will remember a sleep mat (if indeed he comes again). The rest of us should try to be good and clever. Oh man, what an endeavour.