My first ride this week was a stolen route from Strava. I stalk a few guys on Strava and at times feel inspired to repeat their routes. This particular route took me to Gay Hill and back via Danzey. Most of the route was nice - mostly country lanes and generally good views and surroundings. Some parts were nasty - menace pot holes and roads that were way too narrow with vehicles blocking road and some menace horses. If I were to repeat route I would make a few changes.
After I cycled the above route, the creator of route felt inspired to cycle it again himself. Nice. We both agree that this was a challenging route.

My second cycle of the week was with Ron. Ron has been a long time inspirer of mine. We cycled the classic Deer route. A special thanks to Ron for fixing Scotty's chain!
Am not sure if I inspired Jane and Lin et al to purchase their new Specialized steeds but I like to think so. I think my LEL cycle helped inspire my buddy Chris to complete his Isle of Man (IOM) race this weekend too. Well done chris for cycling the IOM end to end with front brake on the whole time! Even the gnomes in my garden have been tearing up and down my lawn with a new wave of inspiration! 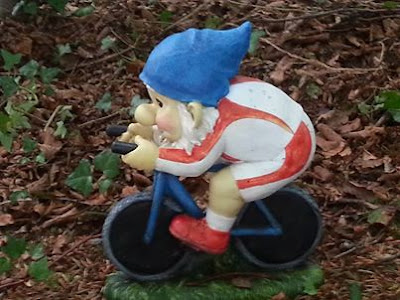