This week looked promising from the start because I had taken a few days off work. Less work meant (theoretically at least) more cycling. The more miles, the more smiles!

The first cycle of the week probably produced more frowns than smiles. Aid, Ron and I took our MTB's out for a blast. Ron suggested we should take on a dirty off-road route and we started to cycle where 'there be dragons'. We didn't find any dragons but alas we found thorns aplenty! All three of us were attacked by the puncture pixie. I fixed my puncture on the spot (replaced tube). Aid's tubes were filled with slime so he only lost a bit of pressure. Ron decided to ride back on flat tyres. What a mash-up MTB experience!
My next ride was a more positive experience. Aid and Ron both left their bikes with me after the mash-up the day before. Ron left his punctured full-susser - there was no way that was going anywhere. Aid had left behind his 29er. I couldn't resist, after I inflated tyres to a good pressure, I took Aid's bike for a short blast (err cheers Aid)...
I cycled my familiar AM SR 1 route in reverse. It was a nice experience on the whole but Aid will be glad to know that I wont steal his bike again (or will I?). His front bar was longer than mine and I found it proved harder to pull on when climbing hills. Oh, and his saddle ain't the comfiest. I think 29er's are probably best suited for off road single-track and down-hill trails. What would I know?!
Didn't cycle mid-week. Instead, I went swimming with baby Lunar and SJ which was nice. After our swim we went to a local garden store. Am sure the plants and trees were trying to tell me something! 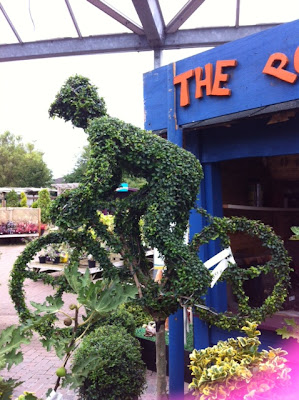 My big ride of the week was the Cotswold Corker (CC) 100k audax, which I had ridden several times before.  This time, the event had a slight twist. I rode this at a sociable pace alongside Louise Rigby and Stephen Poulton. A map of the route is presented below, along with a profile demonstrating the hilly nature of the route. Bring on the 'Sociable Corker'.
As is usual for me, I started the CC from Winchcombe. I was solo at this point and didn't know if I'd see Lou or Steve en route at all. Steve had tipped me off via email that they were going to leave Bishops Cleeve at 10 a.m. After I climbed up and over Cleeve Hill, I reached Bishops Cleeve for about 10 a.m. - no sign of Lou or Steve. 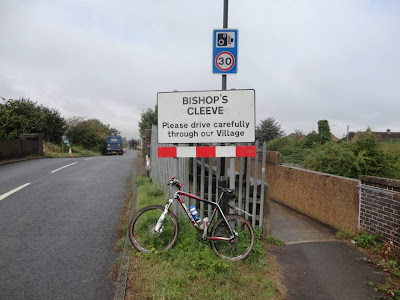 The next hill was the beast of Bushcombe Lane - glad to report I successfully beat this monster and then had a speedy descent back down Cleeve Hill to Winchcombe. Whilst I was taking my POP photo at the Winchcombe sign, 2 folk flew past who I recognised as Steve and Lou. 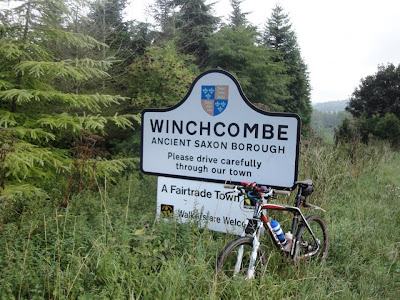 Lou's bike was a dead give-away. At ATM in Winchcombe, I introduced myself to the pair. (I had met Lou several times before but she didn't recognise me; had never met Steve before despite cycling so many of his permanent events, this being one of them).

We decided to cycle together as a threesome and rode at a sociable pace. Sociable meant slow. This was a nice pace and suited us all. Steve was recovering from injury. I was able to chat and learn local knowledge from the others. Lou was riding her new(ish) bike that she didn't like going zoomy down-hill on due to it's smaller wheels. At the Guiting Power control, Lou showed me a shop that I hadn't visited before. Sadly, the shop didn't have a stamp or till so for POP purposes it wasn't the best. I took a photo here which I thought was nice because as well as showing off my 2 new cycling buddies, it also showed our very different steeds. 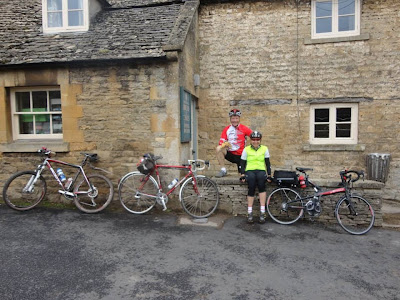 As can be seen, I took my MTB. Steve took his steel (I think) road bike. Lou was on her foldable airnimal.

Next stop was Northleach. Not sure how but Steve and I momentarily lost Lou here. We found her inside the Black Cat cafe. Had never used this cafe as a control before. So nice was my panini that I'm sure I'll use this cafe as my POP on future rides. The cafe also had a little black cat stamp for the brevet (and loyalty) card which I thought was a nice touch. (Lou particularly likes to collect stamps). It felt kinda funny stopping here to eat as I would usually stop at the next control and have a pub lunch.

Lovely cycling and chatting all the way to the next control (and to the finish in fact). Folk often ask what I chat about - the answer is 'everything and nothing'. Common chatting themes include family, cycling and food though. We stopped at the Daglingworth control to get a POP of Steve. Lou and I could just answer the info question on brevet card but Steve, being organiser, required an alternative proof. 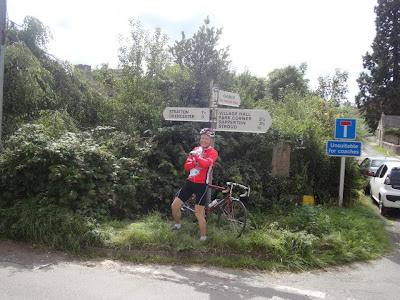 Next stop was the Post Office at the Bisley control. Our cards were stamped by the chatty Claire. After a quick chat and stock-up on Lucozade and chocolate we were off. 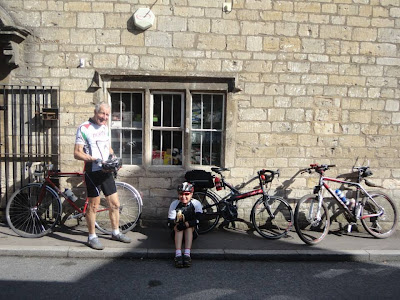 Bisley to Andoversford was a nice section. We passed the 'un-known' stone circle and all think that perhaps the farmer built it. We also cycled past some topiary. Topiary is the art of cutting shapes into hedges. Lou knew what the shapes were and tested me. I correctly guessed the hedge was a poodle - Lou's husband (Mark) thought it was an elephant. (Should have taken a photo, d'oh). Not sure what I won for guessing correctly. Not too far past the topiary was the super descent that led down to Andoversford.

Being a social ride and all, we decided to stop for a drink at The Royal Oak in Andoversford. The pub was closed. However, they opened up for us three! How cool, how nice.

The final section took me on perhaps my favourite section. The route climbed slowly up to and past Belas Knap and offered splendid views. After Belas Knap a super fast descent lead back to Winchcombe. Woo hoo, job done! Well, job done for me at least - Lou and Steve still had to cycle back to Bishops Cleeve. We shook hands at this point and said our goodbye's. Am sure 'wheel' ride together again sometime in the future. Maybe I'll ride the Yat Mon 150k event with Lou. Maybe I'll ride Steve's Old Clee Hill Flyer. Time will tell.

Big thanks to Lou and Steve for an awesome days cycling!

I didn't cycle on Friday. The weather had turned nasty. SJ, Lunar, Cody and I went for a walk in Webheath Woods instead which was nice. Lunar and I giggled at the photo's SJ had taken once back at home. 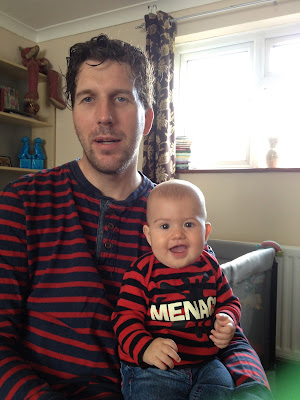 Goofed around on the computer a lot on Friday too. Was pleased to view my audax rides to date and by completing The Cotswold Corker I had completed my AAARtY challenge. If I complete a 200k event this month (have one planned with Chris H on the 21st) then I will have completed my RRtY challenge too. Strava allowed me to view all my cycling this year (well since I had my Garmin anyway) and is presented on the heat map picture below. 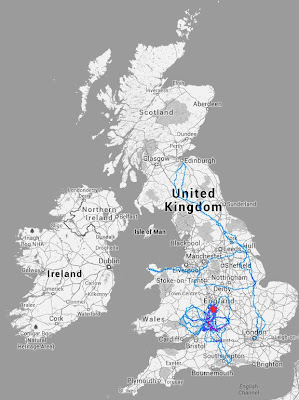 Struggled with my motivation a wee bit over the weekend. However, Ron called and provided the motivation to get me out. We cycled a local clean MTB route. Nice.
All in all cycled a total of 202k during the course of the week. Yearly distance to date is now 9,574k.
at September 13, 2013