Jenny and The Cotswold Corker

Am enjoying my cycle to work now that I have started to commute by bicycle. Even on those days when I don't cycle in to work, my head space is more-often-than-not thinking about bicycle related non-sense. On one particular day when I took the train, I checked my Face-book and saw that my dear wife had posted this:
On another occasion, I started to read the free 'ShortList' magazine. This is a magazine often found on empty train seats. Interesting thing was that this magazine contained numerous bits and pieces about bike related stuff.
One whole page was dedicated to the movie shown above. Sounds like a worthwhile watch. Hmm, let's see what the Mrs thinks... Another page had a column about commuter bikes. At £2k a pop, I'm pleased I had already purchased my new commute bike (sub £700).
Indeed, I purchased a 'Genesis Day One Disc' - a hopefully perfect cyclo-cross bike for my commuting. I purchased my bike from Evans Cycles simply because it was super close to where I work and because they offered a price-match scheme. They also threw in a free 'bike fit'. This bike fit was pretty pants - it involved someone holding the bike whilst I pedalled backwards. Weird. I got the Evans staff to change the freewheel too, from a 18t down to a 16t, just because I wanted the gear ratio to match my single-speed audax bike. Evans staff nicked the 'old' freewheel (with all the buzz of a new bike, I didn't realise till following day). So, my point is, Evans is pretty naff but my bike was great!

I took a train from bike shop but got off at Longbridge and cycled 'Jenny', my Genesis bike for the first time. She felt great. I took her on and off road and was happy with her performance. Once home, I changed her pedals to SPD's and cycled her a little more. Better yet! Last of all, I fitted a rear mudguard and looked forward to my first cycle to work and back commute.

Friday was my first work-and-back commute with Jenny. Work-bound and all was OK until I reached just past Kings Norton. For some reason, the tow path was closed. I cycled some main road (and found jumping on and off the pavements no bother) until I rejoined my usual route a little further ahead just before Cannon Hill Park. Jenny felt slower than Kay-O did but I got to work in pretty much the self-same time. I cycled her home following as much tow path as I could find, following the canal from right where I work. This was fun and maybe 10k+ was flat tow path. As expected, the tow path near Kings Norton was closed (repairs I believe) but I was able to pick up my usual route not far after. Again, Jenny felt slow but I reached home in a quicker than usual time.

Jenny's verdict: A beautiful looking bike. The wheels are well suited for both on and off road hacking and pot holes and kerbs are now no menace. The disc brakes are better than rim brakes but are not as awesome as I had hoped. Maybe they need to bed in a little. My hydraulic brakes on other bikes are sharper. The steel frame is great and there is wide clearance for fat tyres. A little heavier than other bikes but not big time. Saddle is fine. Drop bars are fine and preferred to flats. Am pleased with my new steed and hope we can share a lot of miles together!

Over the weekend, I completed the Cotswold Corker, a hilly 100k audax event for the umpteenth time. I didn't use Jenny, that would have been silly. Scotty was my steed of choice for this event.

The weather was great for my audax event - the hottest day this year, thus far. I have even got a cyclists sun tan to boot. Shame I forgot the after sun cream.

This was a great ride and am aware I have blogged about it extensively before. Up Cleeve Hill and fast descent into Bishop's Cleeve. Why is there a bat on the sign post?
Completed the 'corker' climb of Bushcombe Lane - about 30% in parts! Hot and sweaty. Down Cleeve Hill and up some more. Undulating is the nature of this ride. Not sure what was up with Scotty but she had developed a terrible creaking sound that sounded like the frame is cracked. Must check this out. 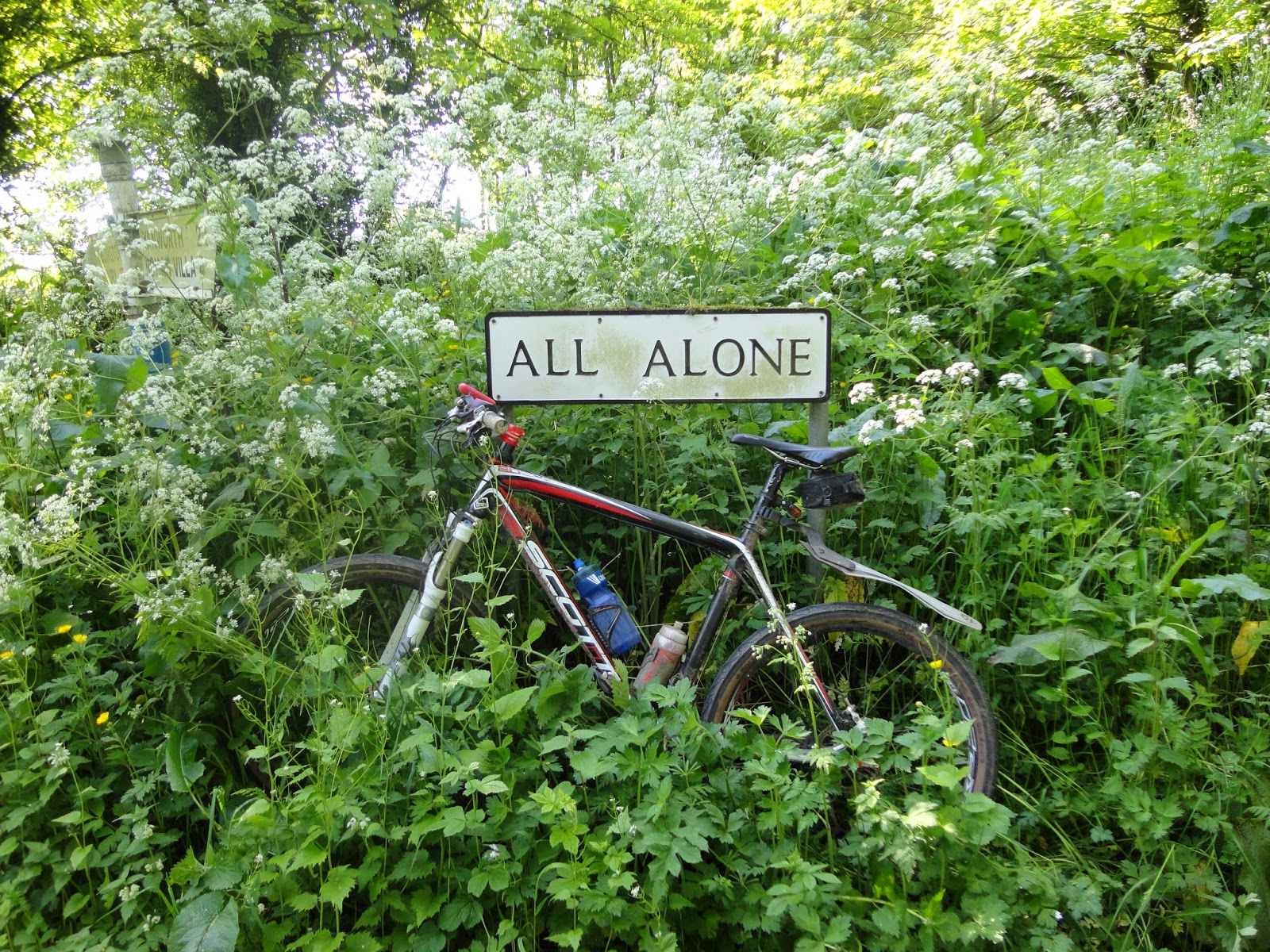 Just past Northleach and I was reminded that I was 'All Alone'. Or so I thought. The bright sun had brought out some other friends of mine...
This snake was sun-basking in the centre of the road. Funny thing was that I had dreams about snakes earlier in the week! This was the second time I had encountered a snake during this audax event.

Remainder of route was snake and spider free! I had started this event early and was back in time for tea! What a grand old day - yippee!