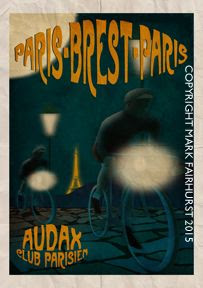 Determined to make sure this week was better than the last. Started off with a run commute into work. Usual 10k run. Interval style. Felt I had worked quite hard as my calf muscles were feeling sore after my activity.

Tuesday turned out to be quite a dramatic day. Decided to cycle to work and took a slightly different route to my usual. Bombed down a descent heading towards an island in Kings Norton and whoosh! My bike went right and I went left and down. Ouch! It felt like I had hit some ice or diesel but I'm not sure. My rear light smashed to bits, pedal scratched, bar plug went AWOL, saddle scuffed and otherwise okay. I landed on my arm and bum - surprisingly my clothes did not rip and no blood. The cars behind and at the island just ignored my bike and body on the road and just drove past me. Except one woman, who stopped her car and got out to make sure I was okay. She asked if I wanted her to phone anybody. How kind. Apart from some road rash on my bum and a little bruising to my shin I was all good. Continued my trip into work without any further menace. My day at work was ok but strangely my arm felt heavier than it normally did - must have been from my fall. Cycle home was all fine. Once home, I took off my cycling shoes and replaced them for my Lunarglide 6's and went for a short run. That's right, I completed a brick! My wee 2.5k completed my training for that day.

Woke up with a sore arm on Wednesday but otherwise felt fine. Decided to go for a cross country run which I hadn't done in a long time. My run took me over the fields of Studley where I headed for the castle. Had been so long since I had ran here that there was new public paths and signs in place. 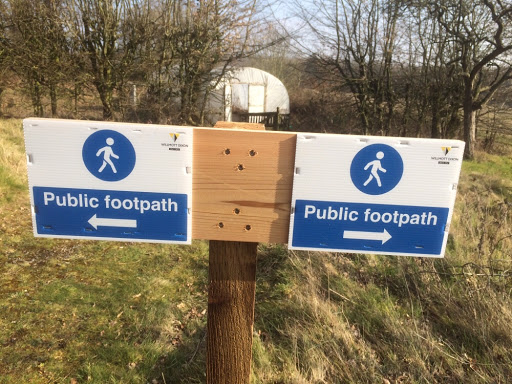 These public footpaths passed the entrance to the secret garden, though I thought it best I did not enter. Who knew what horrors may be waiting there. Maybe another time? 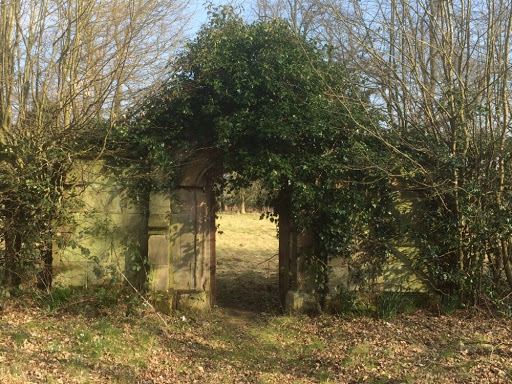 I think I veered off the public right of way path and ended up at a fishing pond. This pond (a carp pond I think) had its own island and the remains of some building (like an old haunted house) could be seen on it. Spooky! 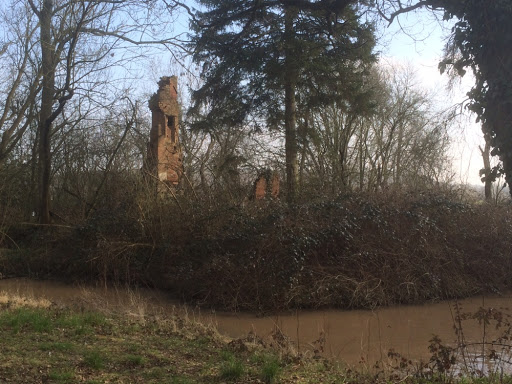 I turned around here and ran back following the Forest of England marathon route that I ran last year. My run took me past Purity brewery and a nearby hidden camping ground. This camping ground had gypsy like caravans for rent - that might be fun with the wife and kids one time?! Ran on and on and came out in Coughton where I turned around and ran back home following different off road tracks back into my village. Such a lovely run covering about 15k in all. I just might run more off road treks as the scenery and adventure beats that of the road. Later on Wednesday, I took to the water and swam 1,400 metres. My swim was at Kingsley pool, just a short 20m pool but this was the self same pool where I met Phil. Phil was the guy who introduced me to Redditch Triathlon club. So, Phil was instrumental, you could say, in getting me to where I am now. Where am I now?! - about 18 weeks away from an epic adventure known as Ironman!

Thursday was a great day. This was a cycle commute to work and back day with me leaving work early in the afternoon - bonus! A nice sun shining day, just had to go out for a 'brick' run once I got home. I ran just over 5k repeating the start of the cross country run I ran earlier in the week. Studley castle looked even better in the bright sunshine.
Short swim was Friday's activity. Back in a 25m pool. Swam just 1,500m in all.

Saturday was my birthday. My wife, as usual, got me an awesome gift. This year she gave me a PBP print '90 hours' which was just awesome and is pictured at the top of this blog post. The PBP I completed was back in 2011. SJ and I were 'courting' and she was my support whilst we were in the city of love. Talking of love, my work chums sent the lovely picture below. I was genuinely touched.

SJ also got me a tortoise but I think he had rigor mortis... 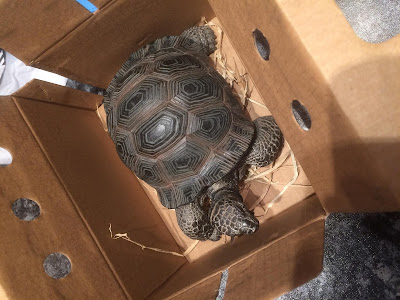 My birthday didn't stop me from training - I decided to cycle the Avenger route I competed in last year (only this time around I started and finished in my village as opposed to Ragley Hall). Lovely fast route out with tail wind and crippling return with the menace head wind. Cycled 67k in all. Once home, a lovely birthday cake was waiting for me. Yummers!

I know a lot of you might be eager to rush out and buy me belated birthday presents but please don't. Instead, please sponsor my latest charity - that being Papyrus. Papyrus help promote the fact that with appropriate support and education, young suicide can be prevented. Suicide is the biggest killer of young people - male and female -under 35 in the UK. Please sponsor my by following this link: support Papyrus. A big, big thanks to all those that have supported and/or sponsored me thus far. I'd like to thank everyone in person, however, with so many 'anonymous' donations that ain't going to be possible.

Finished my week with a 2,000m swim and a 9k cross country run to Studley Castle and back. Real pleased I had a good training week after so many naff one's. One word to describe how I feel - 'whacked'!
at March 20, 2016