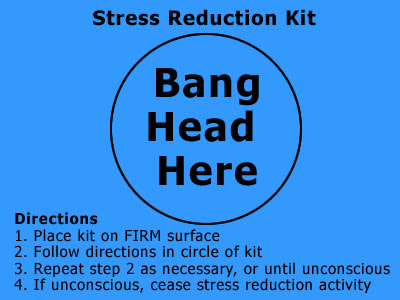 Lack of posting for a while because my life went a little topsy-turvy. Gremlins had messed with my head-space. My daughter Lunar told me that aliens had stolen the moon while she was sleeping. Don't panic though, Lunar informed that the aliens have put it back. Life resumes to a relative norm... 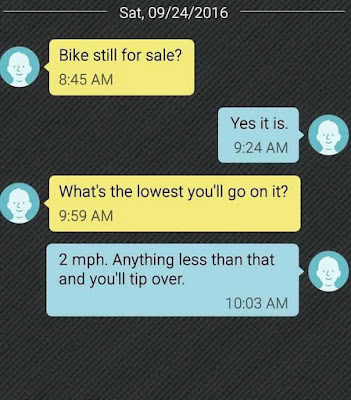 The furthest out great adventure I recall since my last post was when I caught up with my buddy Roger. Roger is my blind buddy who owns an old tandem called 'the Beast'. Anyways, we cycled his tandem again on this adventure. Our trip was a trek to a 'new-to-me' café and back. We covered about 60k and ate a real tasty bacon and egg bap.

Shortly after the above adventure, menace happened. I had numerous work related meetings and had to be interviewed for my own job. I was informed on a Friday that I would find out my fate that self-same day. I didn't. The powers that be informed there was an issue.

After the above menace, I think it's fair to say my week went a trifle wonky. My headspace became mashed up and everything that was right was wrong again. Argh! 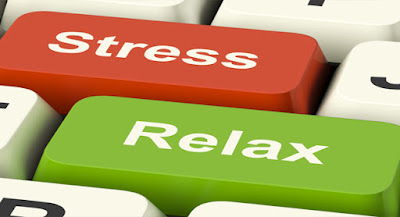 Before the week was out, I figured I'd take my bike out in the hope it made me feel better.  I had wanted to cycle through the Netherton Tunnel for an age now. So, during the end of the week, I went in search of nether Netherton (see what I did there?)!
My trip started from home. My bike of choice for this adventure was my commute bike - a Genesis single-speed cyclo-cross bike. Pretty awesome that my bespoke Alpkit frame bag fitted this machine (as it was made for my Cannondale). I cycled about 22k to reach Stratford where my of-road adventure began. 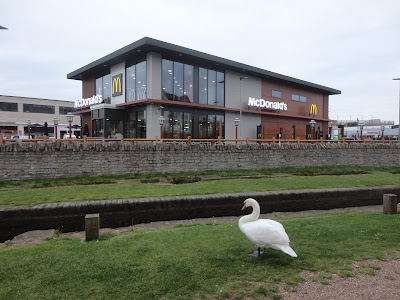 What a better way to start than being attacked by a big swan and finding a Maccy D's. The swan was real evil hissing at me. The Maccy's was delicious. 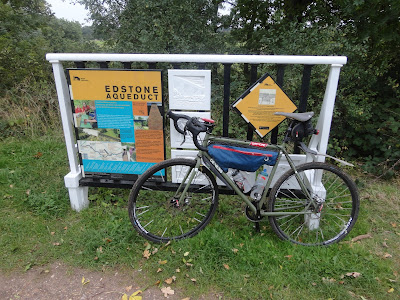 I figured I would follow the canal all the way to Netherton, just because I could. I had cycled and ran stretches of the canal network before (but never this much in one go). The canal network stretches for miles and I think further adventure can be sought here. The first real thing worthy of note was Edstone Aqueduct - this is the longest Aqueduct in England! 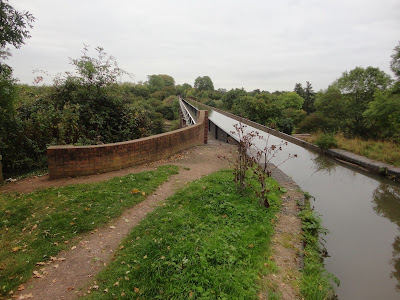 After about 21k along this canal I came to the first 'cross roads' (that doesn't sound right). At this junction the canal continued to Birmingham by either taking the Grand Union Canal or continuing to Kings Norton. The Grand Union could take one to Oxford or London too, I am led to believe. 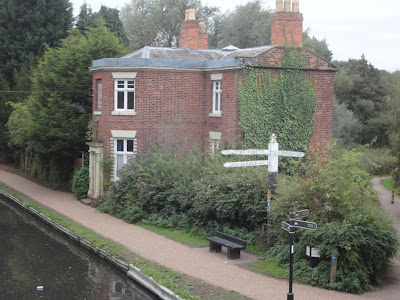 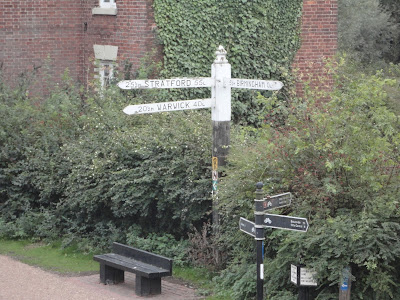 Before I left the house, I informed Lunar that I was going in search of tunnels. The first tunnel I encountered was the Edgbaston Tunnel. Have ran/cycled through this tunnel many times on my way to work. 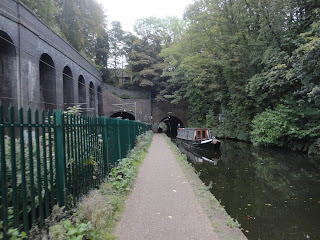 Much canal was followed into Birmingham. My next encountered tunnel was heading in the direction of West Bromwich. I think this was the Dalton Tunnel. It could have been Galton or Balton?! 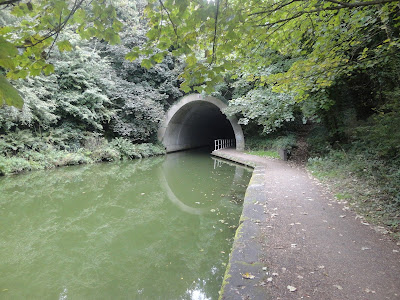 Passed through the tunnel and it wasn't long before I reached Sheepwash. This was another fork or junction. Straight on would have led to Wolverhampton, but turning left would take me to Netherton! 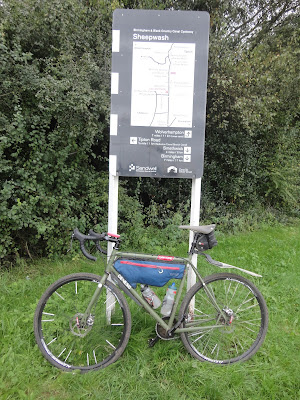 Wonder where the name 'Sheepwash' came from. No sheep here. Ooh, but there was a rather neat looking tunnel straight ahead! 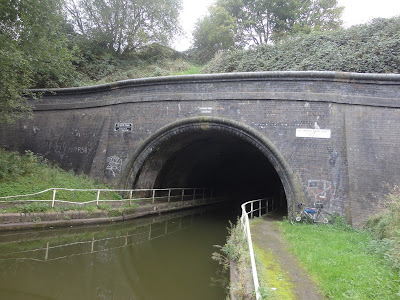 Yes indeed, Netherton Tunnel lay ahead. It looked very dark inside. How exciting! 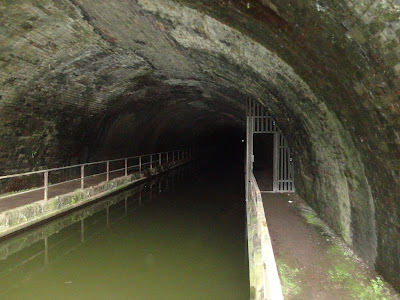 According to Wikipedia 'Netherton Tunnel was the last canal tunnel to be built in Britain during the Canal Age. The first sod was turned by the Lord Ward on 31 December 1855 and the canal opened on 20 August 1858, providing a waterway connection between the Black Country towns of Netherton and Tipton. It was built to relieve the bottleneck of the adjacent Dudley Tunnel which is very narrow, has alternating blocks of one-way working, and had waiting times of eight hours or more, and sometimes several days.

The Netherton tunnel was built with a width of 27 feet (8.2 m) to allow two-way working of narrowboats; and is brick lined throughout. It has towpaths running through it, one on each side, which enabled horse-drawn narrowboats to be pulled through it. Chainage (distance) markers are still visible on the Eastern wall. The tunnel was fitted, from the start, with gas lighting over the towpaths, though this was later converted to electricity and it is now unlit.

The air vents that run along the line of the tunnel and provide ventilation, and a shaft of light into the canal, are known by the locals as "pepper pots", because of their shape. They are brick-lined and the openings are covered by an iron frame or grill. The wide bore and good ventilation mean that boats using the tunnel today are allowed to use the power of their internal combustion engines, which is prohibited in the narrower Dudley Tunnel.

The tunnel cost £302,000 as opposed to the £238,000 estimate prior to construction. The main reason for the project being overbudget was the extra works necessitated by the condition of the ground through which the tunnel passes'. 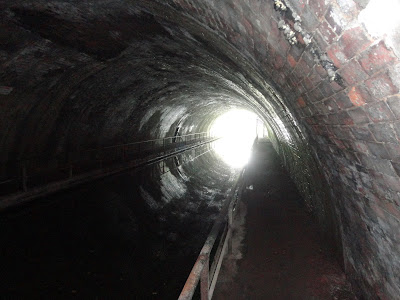 The tunnel was long, dark and far. Water was dripping down in places too. Oh, and in many places and for long stretches, the floor was flooded and un-even. 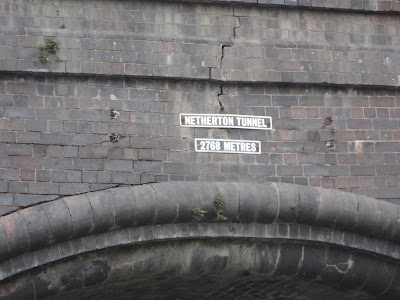 Woo Hoo! I had found Netherton and cycled through the Netherton Tunnel. All 2,768 metres of it. One day, I will take my kids through here too. 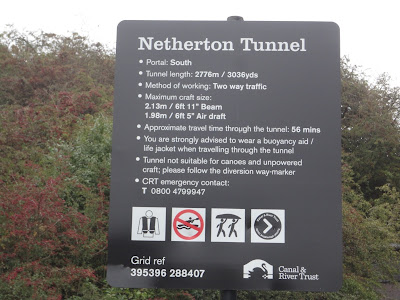 Once through the tunnel, I cycled a little further and studied my maps. I didn't know exactly where I was. I could see Dudley Tunnel was straight ahead. I stopped to ask a random fella for advice. He studied his phone and chatted with for a while but he didn't know where I was on my map either. He suggested I turn *that* way and head to Brierley Hill and check out the waterfront? 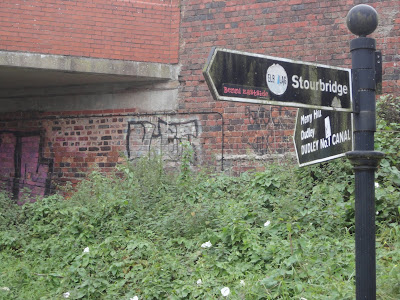 I followed the way the chap suggested and came across the above signage which didn't help me know where I was. I got talking to another bloke who quite bizarrely took a picture of me to show his wife?! I figured I'd carry on (especially as it was down hill). 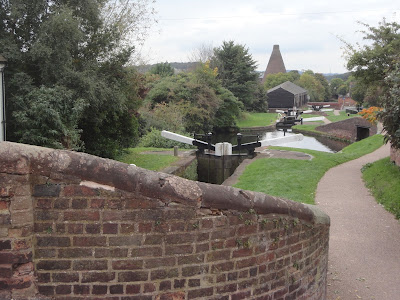 Not sure if the above pic was before or after Merry Hill. I stopped at the waterfront (not waterfall) anyway and had lunch at a 'spoons pub. Delicious. Then, I cycled some more. 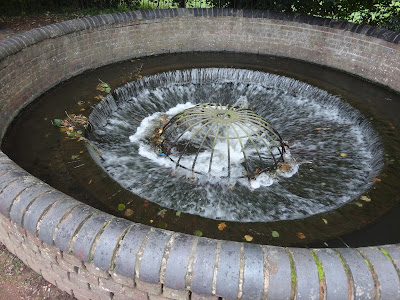 I had gotten onto the Staffs &amp; Worcs canal heading for Worcester. Had to stop at Stewpony Lock to take the above pic. Not exactly sure what it was but it appeared to be some sort of whirlpool 'thing'. Very pretty and really quite weird. 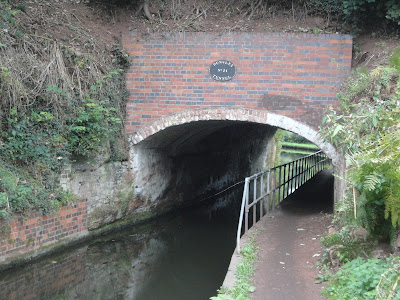 Not long before I passed through another tunnel. This was Dunsley Tunnel and hardly a tunnel at all. Still, a tunnel all the same. 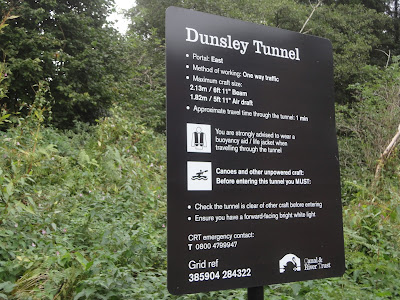 Was really kind of nice following towpath. The quality of the track varied big time from tarmac to gravel and at times single-track. Dirty puddles from time to time. A tree root here and there. Frequently uneven. But, it was quiet and peaceful following the canal and the sights were pretty. One day, I'd like to take a bivvy with me and camp out under the stars 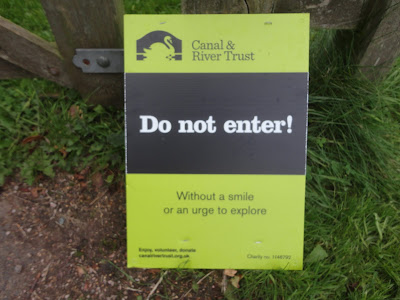 The above sign made me smile. Another weird vortex thing (below) was encountered again. Oh, the sights you'd see if only you were cycling with me! 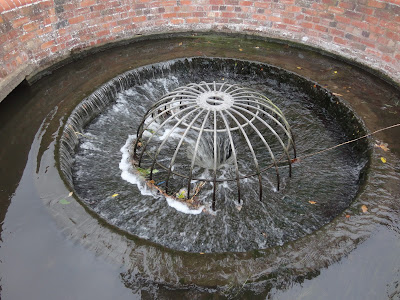 Another tunnel was passed through. Am not sure what this tunnel was called but think it may be Dunsley or Cookley? This was the last tunnel I cycled through on this wonderful adventure. 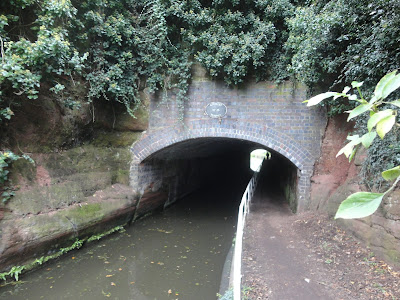 I left the towpath and canal network at Kidderminster and joined the busy main roads. I wanted to return home and see the wife and kids before it got dark. My route took me to Bromsgrove, then Redditch before taking me back to Doo Little. I cycled about 150k in all, mostly off-road and had a grand old time! 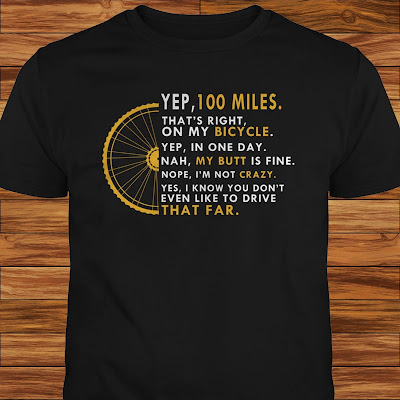