Happy New Year! I do hope you have a great one.  A fat, far out, fantastic, fun filled time is what I'm hoping is in store! And, who knows, maybe more?! 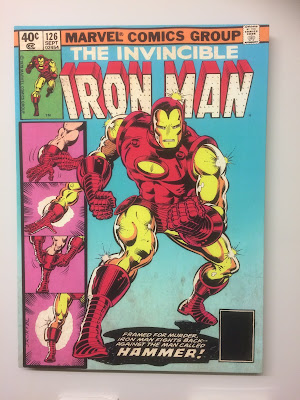 My new year started well. Sarah Jane reminded me I'm not an IronMan any more (aren't IronMen for life?!) but brought me a lovely reminder for the year I was an IronMan! Didn't bother with resolutions and the like for this year. After letting the new year in with my family, I went out with Chris and our bikes! Indeed, we cycled our rendition of the White Roads classic - a 100k (slightly over) on/off road route around Oxfordshire. What a great adventure. 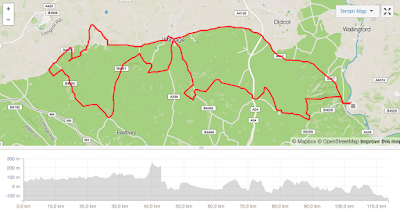 Our White Roads adventure began in a car park in Goring. It was a very cold day, about 0 - -3C throughout the day. I had taken precautions and wore 2 merino base layers, buff, hat, neck collar, gloves etc and sandals. Yep, sandals. Sandals with 2 pairs of woolly socks and waterproof overshoes. My (Lin's) Garmin was equipped with maps now, so I felt proper ready to go. So, go we did! Almost from the off, we cycled with beautiful scenery all around and this continued all the way to the finish.
It wasn't long after we set off that we had to stop so Chris could put extra gloves on to keep his pinkies warm! It really was a cold day. We stopped again a bit further ahead when we spotted signs for 'Ginge'. This made us chuckle, and reminded us of our dear red-headed friends, Chris's bike and Fanta pants. 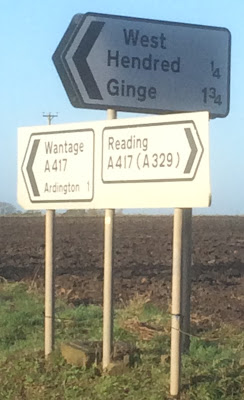 This really was a great ride, filled with awesome scenery and our usual banter. We stopped at frequent times, not to eat as is the norm, but more often than not for comfort break purposes. Each time we stopped, it was great to just look around and think 'wow, this is ace'. 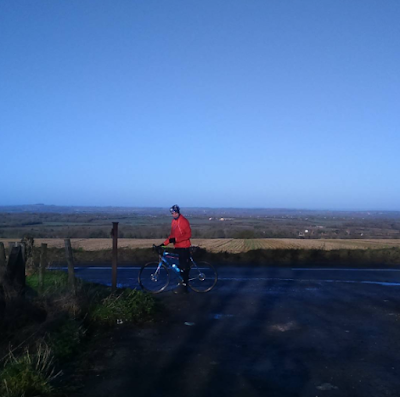 We cycled through the 'Valley of the Racehorse', a place so named because it has over 1,500 horses stabled in and around this area (Lambourn) with lots of gallops. Also, Lambourn has 2 fully licensed equine swimming pools and an equine hospital. Our steel (well mine was aluminium) horses felt at home in this valley. I have cycled in this valley before and each time I do, the Mudhoney song 'Beneath the Valley of the Underdog' rings inside my head.

Horses became a theme during this adventure. I could see signs pointing to Uffington White Horse and then set about telling Chris all about it. Little did I know our route was going to take us right by the horse itself. Whoa - how excited was I?! We started climbing (?Uffington) hill and we could see folk looking down onto the horse itself. This road was real slippy as it was frozen in parts. The climb was nice though, we saw gliders doing loop the loop (and had seen a plane doing the same earlier in the day) and again the scenery breath taking. The gliders turned out to be toy gliders, which was only apparent one we reached the summit. At the summit, I asked a couple of walker if left took us to the horse itself (off road), they replied 'yes, but you'll never get there on a bike'. Pah, of course we got there by bike!
Wow, Uffington White Horse lay beneath our feet. Amazing. The horse is a highly stylised prehistoric hill figure some 360' long, formed from deep trenches filled with chalk. It is believed to date back to the Iron Age or late Bronze age. Some say it's not a horse at all but a dragon, the one that St George slew.
From above the Uffington White horse, we could see Dragon Hill. This hill was a small hillock, a natural chalk hill with an artificial flat top. Legend has it that St George slew the dragon here. The bare patch of chalk upon which no grass grows is purported to be where the dragon's blood spilled.
After the delights of Uffington White Horse and Dragon Hill, we cycled more off-road tracks. Was hard to make out if these were chalk roads because everywhere was so wet and muddy. As we ventured, we saw signs to Waylands Smithy. Super excited again, I ensured we detoured to visit this wonderful site. 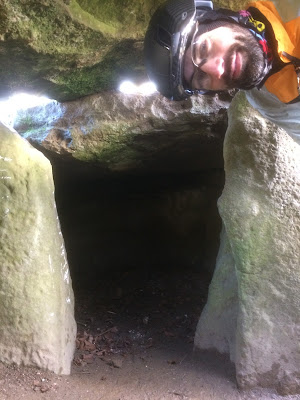 Wayland's Smithy is a Neolithic long barrow and chambered tomb. I re-told the folklore accounts to Chris. The 'real' version is as follows (thanks to Wikipedia): In 1738, Francis Wise recorded a belief held about the site in local folklore.[9] Like several other early commentators, Wise referred to the site not as "Wayland's Smithy", but only as "Wayland Smith".[10] Wise related that: All the account which the country people are able to give of it is 'At this place lived formerly an invisible Smith, and if a traveller's Horse had lost a Shoe upon the road, he had no more to do than to bring the Horse to this place with a piece of money, and leaving both there for some little time, he might come again and find the money gone, but the Horse new shod.[11]The deposition of coins at the site has taken place since at least the 1960s, with visitors lodging the coins into cracks in the site's stones.[12] As of 2015, the local wardens from The National Trust are tasked with removing said deposits, and circa2010 English Heritage removed information about the coin deposition custom from the site's information panel.[12] The coins removed by the wardens are then donated to local charities.[13] As the folklorist Ceri Houlbrook noted, all of this deposited material "contributes to the ritual narrative of a site", being "integral to the contextualisation of a site".[14]

I informed Chris that if we bivvy'd here one night, we might wake up to find our bikes shod with golden tyres. We just might do this one time and find out. Good plan, eh?! 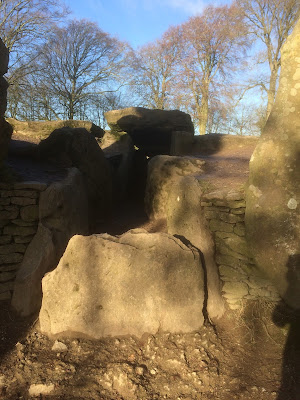 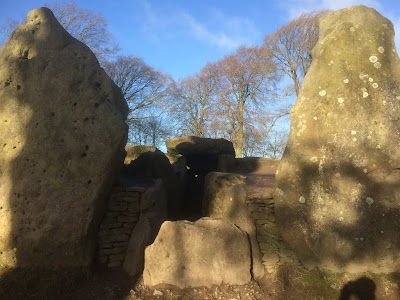 Such a beautiful place. Despite being here before, I don't remember the holes in the stones being filled with coins. They certainly were on this occasion. 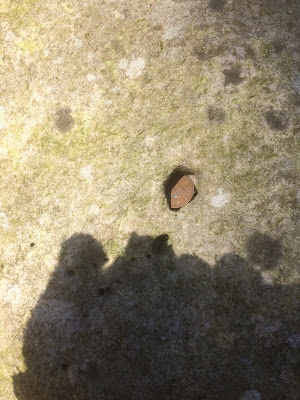 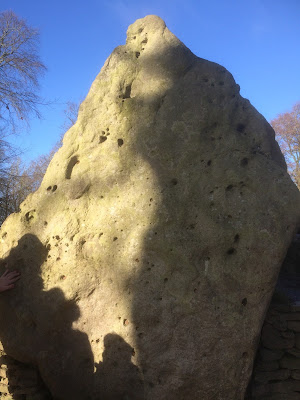 So much fun and barely half way through the ride. We found a pub a little further on but it was closed so no chance to warm our cockles. We cycled a little further and decided to stop for lunch. Lunch consisted of a jam sarnie, pack of crisps and a chocolate biscuit. Man, I was prepared this time around!
After lunch, our ride continued in the same fashion of cycling a mix of road and off road sections. Pretty undulating throughout. We found another pub and this one was open. This pub was great as it allowed us to warm our feet, dry our socks and sip much tea. Pork scratchings made a nice treat.

After pub, we cycled into the darkening night. My Garmin played up for a couple of mins (no back light) but started working again. We saw the blue sky turn black. We saw Jack Frost spread across the roads and paths travelled. We saw much deer. We ate some Moroccan sweets. We felt our feet go from cold to frozen. We had a fantastic time.

As the end neared, the hills appeared to get hillier. Chris (cheeky) asked if he had got fitter or if I had got fatter (who needs a 6 pack when you got a full barrel?). I think both questions were correct. The final off road down hill section was fun and I got air as I hit a few of those bumps.

Our adventure was definitely the way to start a new year in style. Thoroughly enjoyed it. Now to wash the bike and soothe those aching legs...

Tuesday saw me complete my first run of the year. I ran a 5k jaunt around my village. Nothing special, just pleased I ran.

Ran again on Wednesday. Another 5k jaunt. This time I ran the lovely Studley Triangle and ran past 3 people I knew (Gayle, Hannah and Jennie), well, I live in a village y'know.
Thursday saw the return of my pink frame. Took said frame and associated bits back to Gozzard bikes. Waited there whilst the bike builder tested to see if the BB fitted. It did! Yay, hopefully Pinky (my new steed) will be built up prior to the Willy Warmer cycling event later this month. 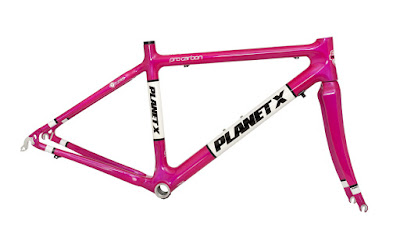 A further run on Friday. Another Studley Triangle run. This time I was wearing a set of Aftershokz Bluez 2 headphones. Absolutely fantastic! Have been trying to get a decent set of headphones for donkeys. These are super cool because they are comfortable, lightweight and don't fit into or onto your ears at all - so you can still hear what's going on around. These pass music through your cheek bones via some bone conduction magic. Weird yes but awesome!
Saturday was a Parkrun day. Ran the Arrow Valley event. This was my 12th Parkrun to date. Had a great time without having a great time if you know what I mean?! Ha! (Was 10 seconds slower than last week).

Not a bad start to the year eh?!