A toe in the ocean

Very little training took place again this past week. This was not due to opportunity or paralysis of will. The man flu I had been suffering with for a good 2 weeks or more had not shifted. Much mucus. Grr. Filth.

Only once was a work and back cycle commute completed. This probably wasn't a good idea. Sure, the cycle helped clear my chest but my orange jacket and shorts were now covered with a goblin green film. Grr. Filth. Am not sure how many commutes 'Jenny' (the Genesis - single-speed cyclocross bike) has got left. Jenny is soon to be replaced with a geared model.

On the subject of bike adventures, my Geneva-Turin-Nice plans have been shelved. Buddies Jamie and Toll first bailed - maybe because of 'the fear'? Chris, my main man has a new love in his life. And, well, I'm skinted and Lunar starts school at the time the tripped was planned, so, that was me out too.

However, as one adventure is shelved another is born. I have decided to cycle a coast to coast adventure and (wild?) camp as I go along. I figured I'd follow the Trans Pennine Trail and have an easy adventure for a change (easy in the sense of navigation, not mega distance and relatively flat). My buddy Ron commented 'well, that's 1 day sorted, what ya doing the rest?' - cheek! I plan to cycle this trip solo but am more than happy to have company should any of my mates want to join me. I've not yet been brave enough to camp alone. To help kick my plan into motion, I have purchased a rail ticket ready for my adventure. My first day will be a cycle to Birmingham and then a train to Southport. From Southport my journey really begins. I'll keep you posted.... 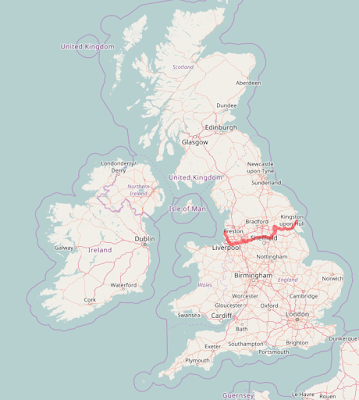 Played badminton one time in the week. Just like the last few weeks, this was with my Mrs. It was a great session and felt better because I won more games! Woo hoo! Scores on the doors 3:2. And, as an aside, the pharmacist where I'm currently based would look the spit of George Dawes should she cut her hair off. Ha!
Pushed myself to run on the weekend. Didn't take part in the Parkrun, but ran a couple of 5k run's all the same. Run felt great and this was the first time I had ran in like 2 weeks.