This past week started great after a cycling lull spanning about 2 weeks. Indeed, Monday saw me cycle 3 different trips using 2 different bikes. One of these bikes was 'Eleven', the new addition to my stable.
Eleven's first ride was a trip from mine to my buddy Rogers domicile. Eleven performed just fine on her 25k debut. Since Eleven was so shiny and new, decided to keep her that way and cycled only on road (as opposed to off-road options).

Once at Roger's, I swapped Eleven for the front seat of his tandem 'The Beast'. We cycled a familiar route to Whitlenge Tea Rooms and back. Whitlenge Tea Rooms provided the most awesome breakfast at about the half way point. This was a good route and formed a 'half-pipe' looking hilliness profile (see pic below). The heavier climbing on the outward bound route. In the cafe, Rogers nose was bleeding quite bad - gushing with bright red blood. Roger couldn't see his blood as he has been blind for as nearly as many years as I have been alive. However, Roger was not born blind and has seen colour. Better yet, Roger remembers colours quite vividly and red is his favourite colour. Red, like the blood from his nose and like the colour of 'The Beast'. Roger is a legend. 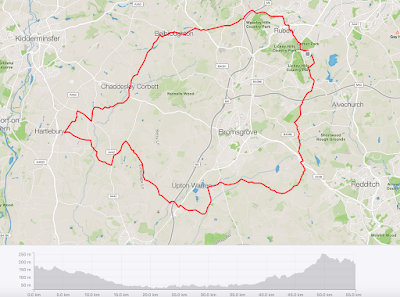 Once back at Roger's, I quickly changed bikes again. Decided to cycle Eleven home by climbing up and whizzing down the hill by the Lickey's. Eleven climbed just fine. Her brakes weren't bedded in yet and I hope they prove better than the BB5's I had on my previous Cannondale! Felt kinda different riding a biking with 37mm tyres. Hmm, now not sure whether to cycle an audax (200k) using same fat tyres or swap to something like 28mm. I wonder how much difference it would make?

In the week, I completed 3 to work and back commutes. My journeys appear to take me at least 10 minutes longer each way now that I have changed my tyres (to Winter tyres). Is dark when I leave and dark when I return. Has also been quite cold but not freezing just yet.

Caught up with both my brothers over the weekend. Never saw Big Dave in person, however, he sent me photo's of his new 'bionic back' aka 'spinal tap'. Ouch! 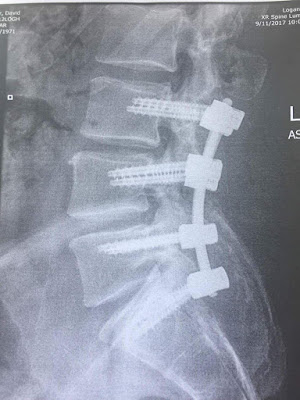 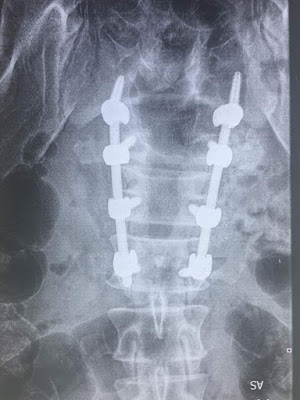 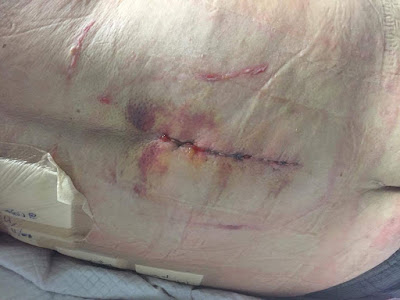 Saw Rob in person. He didn't have a spinal tap. Rob and I ended the week with a nice cycle around the good old 'Deer Route' which I hadn't cycled in ages, so that was nice. In fact, had a lovely weekend with SJ and the kids plus Robin, Kim and Ma and Pa. The firework display we saw was rather spectacular and it was great to wish my Pops a happy birthday.
at November 12, 2017