Back to Back and the Bad (Bum) Badger perm 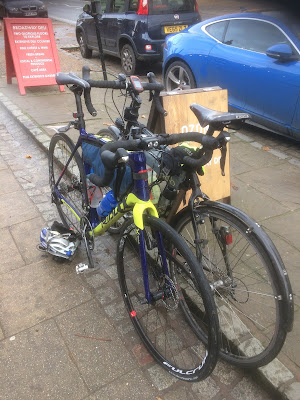 Wowser, what a great start to this week. Training started 'early doors' on Monday morning. And what a start it was!

Jamie cycled all the way from his domicile in Brum to join me on a perm that I had created. The Bad (Bum) Badger' perm. We were late in setting off but it was still early in the morning.
Cycling to the first control in Broadway was pleasant enough. It was like my regular commute to work, only I was on a different bike. 'Eleven' was my machine on this adventure and she felt different kitted out in skinny (28mm) tyres. We never actually reached my work place, we cycled past it and then stopped in beautiful Broadway. Breakfast in Broadway was a challenge - beans on toast £50 (well, £5.80)! Wow, do people really stop for breakfast here?! We spotted a deli and had a snack as the prices were so high. I opted for a samosa (£1.95) and Jamie had a black pudding scotch egg. 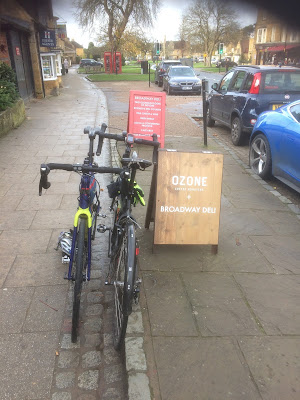 We left beautiful Broadway and cycled into wonderful Winchcombe. The first of our major hills came next. Cleeve Hill wasn't super challenging but it was a hill none the less. Jamie reached the very near top in his large chain ring. Super hero or showing off?! Over the top and wee, what a super descent! Our wheels took us into Cheltenham where we stopped and snacked some more. A further savoury dish for me - sausage roll. Pretty gross but food none the less.

Big hill number 2 was soon climbed. I think this was Lilly Hill. Just a tad tougher than the first big one. A strange but rather cool looking buss shelter tops the top of this climb. Shame I didn't take a pic. Long descent, long roads and a tad off off-roading (slippy muddy stuff) took us into Cricklade for our official breakfast stop. We found an awesome cafe (and once inside saw a CTC cyclists welcome sign). Jamie had a big breakfast here and I had a mega one! 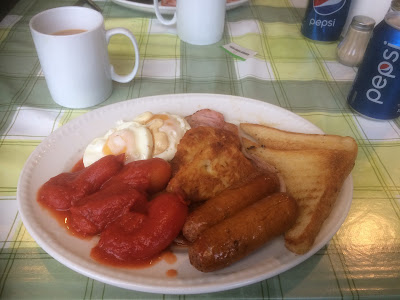 I love these greasy spoon type gaffs. Lots of food, tasty and relatively cheap. I loved the way Stacey (the girl behind the counter) would squeeze our t-bags in her bare dirty fingers and lob said bag into a bin some distance away. Did I eat all my breakfast? - you bet I did! 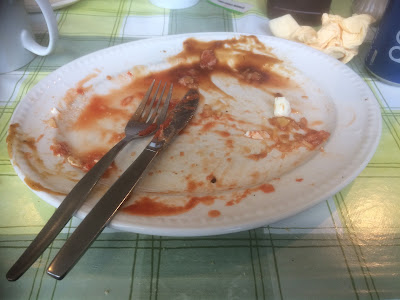 Leaving Cricklade we cycled a short stretch of motorway. Not really, but a busy road (slip road) had to be cycled until we reached quieter roads again. On route to Witney we cycled some relatively quiet roads that were littered with traffic lights for no apparent reason. We passed many an airfield too and spotted strange drone like things that transformed into regular aeroplanes. Jamie had a puncture menace once the day light vanished (this may have been after the next control). Some random off road cycle paths were navigated too (again, this may have been after the next control). Whatever, and wherever we cycled, we reached Witney and stopped at Greggs. Hot drinks and gingerbread man helped warm our cockles before we set sail for Banbury. Talking of warm, Jamie had given me some Aldi special merino socks and they were just aces! Thermo regulated warm feet! Cheers dude. 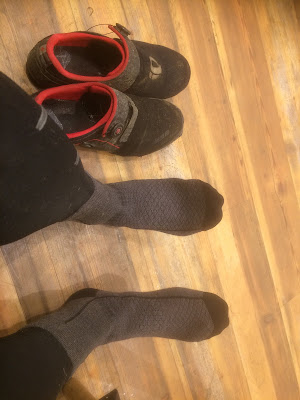 Long stretch to Banbury. Headspace a bit all over the place but good cycling. Am sure we chatted about TAW and other cycling related non-sense. Am sure random randomness was discussed to. And the next thing you know - wow, there was a cock horse on Banbury Hill! Well, there was a horse (and frog) and a cross. 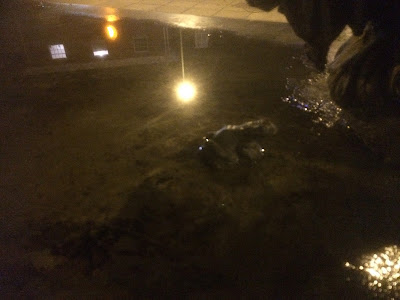 We had reached Banbury and Jamie decided to have another puncture! Puncture fixed and faces stuffed. We found a great kebab house and lamb kebab in naan was exactly what I devoured. Yummers! 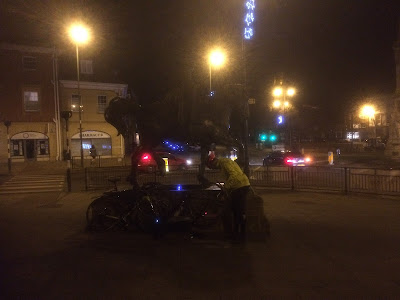 The last stage took us home, well back to 'Doo Little' anyway. We cycled past Stratford which looked pretty awesome with all the Christmas lights. The main roads we cycled on this last stage were relatively quiet (due to time of day) which was a blessing. On reaching my abode my body felt broken, but my head felt groovy. Another awesome audax cycled and a great adventure with Jamie. How we're gonna cope with 12 days of tougher madness next year is a bit daunting at this stage. Jamie then left my yard and cycled back to his in Brum. Yeah, he is made of the same stuff as super hero's!

Following day, Tuesday, I cycled to work and back. Ouch, groan and moan! Who said back to back cycling was a good idea?! Felt so whacked. Once home again, I put my eldest daughter to bed. She asked I cuddle her for a moment to help warm her bed. Next thing you know - my wife searched and discovered me. She was wondering where I had gone until my snoring gave me away. I had fallen asleep in Lunar's bed!

Wednesday was another cycle commute. Thankfully, I felt better than the day before. Strangely, still felt hungry though (having eaten and eaten last couple of days). Still felt sleepy too. This recovery thing is difficult!

I thought about running on Thursday. The thought ran away without me. Cold and frozen, decided I'd had enough exercise for one week!