The Racing Collective is a rather funky website that contains a whole bunch of cycling events in the spirit of adventure. An event entitled #transengland19 was one such event that caught my eye. The only problem was that I was working whilst this event was being held...

Discussed #transengland19 with my buddy Jamie and a plan was born. We would cycle this event 'Macadoo' style. Basically, we would ride the event, pinching another's route and cycle it when we were able (which turned out to be just 6 days after the 'official start).
Our planned adventure was basically a coast to coast (CTC) adventure that started in Morecambe and finished in Scarborough. A 299k jaunt with about 4,500m of climbing and taking in the delights of the Yorkshire Dales and North York Moors. (Thanks, well kinda, to Big Al from RidewithGPS). What could possibly go wrong? Instructions were simple - get to the start, follow 5 checkpoints and finish - tweeting a time-stamped photo at each point. Simple, hmmm...
Getting to the start was simple enough. Cycled from home to Birmingham New St. Met with my buddy Jamie and caught the train to Morecambe. After a quick stop at Aldi (for water, emergency pasty and Titan choice bar) headed to the Morecambe Pier and tweeted obligatory start photo.
De-Ja Vu feeling at the start, as Jamie and I had been here before. Memories of our Way of the Roses (coast to coast to coast) trip with Toll came flooding back into my head as well as my Trans-Pennine Trail (coast to coast) solo adventure too. Oh, what would this adventure hold?

Well, the first 30k to checkpoint 1 went smoothly. Sure it was dark, and hilly, and cold and windy too - all that we were expecting. Everything was feeling kinda ok and as it should. We were both feeling the climbs and slowly losing feeling in our cold toes and fingers. It was nice to reach the checkpoint (St Huberts RC Church). We stopped and ate our emergency pasty's. It was so cold, we both max layered up - Jamie was given my spare silk socks as he hadn't brought shoe covers with him. This was maybe the start of mis-hap?! Further menace was the fact that my helmet had died. The strap mechanism 'thing' had snapped on both sides and it wouldn't fit snugly round my head. Fixed the helmet (well, Jamie did) by using zip-ties to attach it securely to my head.
Leaving this checkpoint we shivered, but not for too long as the ascents soon warmed us up. The welcome descents would re-freeze us and this pattern continued for a while. After a spell Jamie informed that we had gone off-route. I didn't believe him as my Garmin was following a breadcrumb trail just fine indicating all was well. Jamie's lights were playing up and perhaps his Garmin was too. Not too far into the ride and we were both feeling sleepy. As fortune would have it, we spotted a McDonalds just off route. Perfect place for a fuel!
Perfect place for a warm too. And a sleep. Jamie was soon counting sheep! What wasn't so great was the fact that we realised it was my Garmin that had played up and we had gotten a good 25k off route. Not sure what happened to my Garmin - this Edge 1000 had not played up before. Why was my Garmin sending us toward Sheffield?! We figured if we double backed to where we had started going wrong that would add like 50k to our route. Hmmm, heading for Checkpoints 2 and 3 now would add serious time and mileage. We decided we would head for checkpoint 4 which was St Nicholas Church in Barnsdale. A Google search wasn't too fruitful, however, we thought we found the postcode to said church which was roughly in the York direction. We slept on our decision making and when awake again we had breakfast! Ooh, we dove love a Maccy D's!
Our plan seemed quite ace initially - we were cycling some great hills and roads. So beautiful, it reminded us both of Ireland. After a while though, the hills disappeared and A roads made an appearance. Much of our cycling was relatively flat which was ok on the nice greenways but not so fine on the busy roads. A real mixed bag of cycling. Oh well, we thought, soon be back on track. When we eventually reached St Nicholas Church, we were well aware that it was not checkpoint 4. Oh no, we had cycled to a bogus checkpoint.
Plans would have to change again. We were miles off route and getting back on track to head to checkpoint 5 was not going to be an option. Damn, blast, no Robin's Hood Bay beach for us. Despite all may coast to coast trips, I have never been to Robins Hood Bay. Another adventure perhaps. With so much chaos in my headspace, only one thing for it - a few more winks (not the first time I have slept in a church). 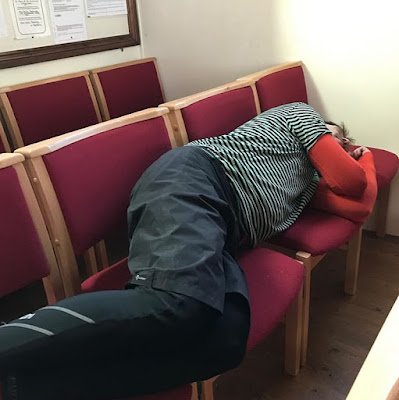 After wakening, our decided mater plan was to reach the finish in Scarborough. 60k of mostly A road (but inter-mingled country roads and cycleway) took us right into Scarborough. At times we stopped for feeding. The most notable feed was my Indonesian (I think) pizza and Jamie's partisan (?) chicken thing. Jamie seemed to pick up speed on this final leg and it felt like a zoomy race to the finish. When in Scarborough, it proved difficult to spot the pier. I asked a lady for directions who replied 'I'm not listening to you' - how rude! The loud sounds from the many amusements and the beach gave it away. Aces, we had found the finish and took an obligatory finish photo of the 'Divng Belle' to prove we had completed the #transengland19 race! Aces. Yeah, so we finished late (and last) and only ticked off one checkpoint but finish we did (a number of other racers scratched) and completed another CTC adventure.
Tweeted my finish photo and lo and behold, The Racing Collective 'liked' my Tweet. Proof in the pudding and all that. Ha! What a (mis)adventure!
Part of our plan was to wild camp at the finish. It was cold (freezing, I think) and Jamie decided we could make further changes to our plan and booked us into a Travelodge! I guess we had finished the race and were at liberty to do what we liked!
Oh man, we slept well at the Travelodge. Jamie would have shared the big bed, but I chose to sleep on the floor as I wanted to test out my new (kindly replaced) Alpkit air mat. We both slept well and how great it was to have a decent sleep.
In the morning, we had a further McDonald's and then boarded a train back to Birmingham. From New St we both cycled to our prospective homes. What an adventure!
Felt much warmer being back in the South. Was nice being reunited with the family. Awesome to eat like an animal and have a great nights sleep. And, fun to plan my next adventure...
at April 13, 2019