May PAM and a new BMX, wham! 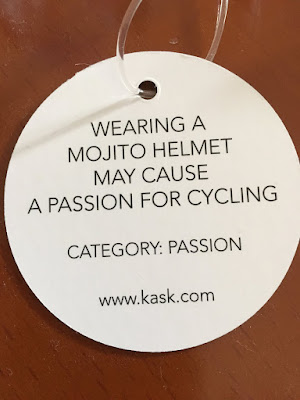 No major adventuring of late. No cycling, wild camping or major happenings to shout about. Hoping to adventure soon.

However, managed to complete my May PAM (ParkRun-a-Month) which pleased me a little. Not having run or cycled much of late and being rather taken with food and fluids, I did not expect a great time. Surprisingly and pleasingly, I completed my 24th ParkRun with a time of 22:49 which was just 10 seconds slower than my fastest time this year. I finished 56th out of 468 runners. I'm sure I saw my cousin-in-law (Jas) on the start line too. My PB remains 21:39 and I would love to beat this time.

My dear wife SJ was given new wheels for her rather funky bike. Better yet, she was given a Kask Mojito helmet too. Let's hope the future see's us cycling a few rides together.
I had recently purchased a new helmet - a Specialized Align, after my Giro Skyline had died. The Specialized lid was super comfy (and cheap at £30) but folk would laugh at me and say I looked like a Star Wars character. Lin and SJ took pity on me and helped 'fund raise' so I was able to get a new, really funky cycling helmet. My new lid is a Kask Mojito X. The Kask is super light and looks way better.
Not only did I get a new lid, I acquired a new bike! Oh yes indeed! My neighbours had slung out some old bicycles for trash, one of which was a Raleigh Super Burner BMX. My neighbours trash was my treasure! Only my treasure was stolen by Lin... Lin plans to refurbish my new/old BMX into a working machine which I hope my daughters will enjoy. Aces.