Completed my July BAM (Bivvy-A-Month) challenge on another wet and wild night. Rob dog accompanied me on this adventure, which despite the weather, was considered really rather good. Only 5 months to go until my challenge is complete!

Had initially planned for this to be a group of Wild Campers camping. However, a great number all gave various excuses reasons as why they wouldn't be attending. Tom has never ventured, Dan couldn't get a pass of his Mrs, Jamie followed the call of the sea instead, and so on and so forth. Surprisingly, Ron declined to adventure too (however, he did join us for pre-adventure drinks at the Lark).

Despite Ron not adventuring proper, he would not allow me to trial his new wonderful bivvy - a 2019 Outdoor Research Helium bivvy, no less. I went to the effort of researching how wonderful this bivvy was and ordered one on Ron's behalf (I actually ordered 2 because, well, y'know, I figured it would be helpful for me to have one to use in the Pan Celtic Race next year). I didn't want to trail my new bivvy out on a wet and a wild night so figured I'd trail Ron's but he said 'no'. Can you believe it?
Anyways, after a few drinks, Rob and I set off to our secret destination with loaded back packs and our cycles of choice. I was actually sporting a new back pack (rucksack) which I rate quite highly. My previous back pack (which wasn't actually mine) had been thrown away after my Fort William mis-adventure because the stitching came undone and a big hole appeared. This new bag was a Eurohike pathfinder 2 rucksack which was same size (45 litre) as the previous pack but which objectively looked much smaller. This pack was ace - it had 2 large side pockets - the one pocket housed my bivvy and the other my sleeping mat with loads of room to spare. A further pocket was on the lid of the pack (where my hip flask, toiletries, hat, head torch and wet-wipes were housed). This pack also featured a bright waterproof cover in the a pocket on the bottom - how fancy!
We knew where we were going to camp as we had discussed this in the Lark before we set off. Am sure Ron didn't have a scooby-doo where I was talking about. In the dark, it was hard to find. Our secret location was well hidden by much scrub, vegetation and trees. The secret coordinates were bitter.iceberg.gone. 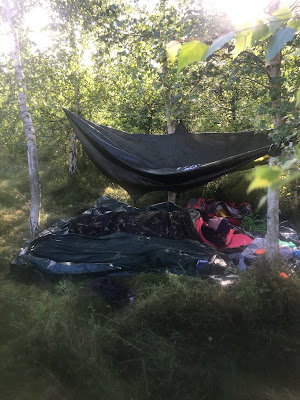 Rob and I struck up my tarp and laid a further tarp down as a groundsheet. Then Rob cooked some burgers and eggs for supper. We washed this down with a wee shot of whiskey and then listened to the pitter-patter of rain until we entered dreamland. 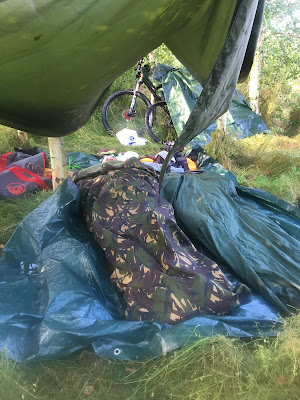 I was the first to awake. The tarp gave way at the one corner and a deluge of water landed all over my bivvy. (I was using my Alpkit bivvy on this particular adventure). The groundsheet kept the water underneath me too. Inside my bivvy and all was warm and dry. Amazing. After fixing the tarp, I returned to sleep for a few more hours.

When morning proper came, we could see the tarp was housing much water (it must have really rained). The groundsheet had pools of water here and there. Amazingly, Rob and I were both completely dry in our bags. Mr trousers were soaking wet too - maybe I should have worn them damp last night rather than removing them to sleep. D'oh!
Breakfast was great! Rob cooked Cumberland sausage and eggs. I made the tea on my Trangia. Delicious.

Quickly packed up after breakfast and cycled home leaving only tyre tracks behind. Despite it feeling strange pulling on my wet trousers, it felt ace completing July's BAM. Already looking forward to August!
at July 21, 2019