This was another week that saw a poor performance regarding my training efforts. Next week will be even worse (I will be away in Hungary). That said, the week ended with me reaching another milestone and completing another challenge. The week ended with me completing my very first ever triathlon!
Aside from the triathlon, my bike only hit the road once. Ron and I rode some familiar trails that we cycled last year. This particular trek took us up a steep climb (off road) and into a wood where there used to be a cart at the top. The cart is no longer there! Ron believes it has been taken away to be restored. I think it's been stolen! We cycled for just under 1 and half hours and finished with a friendly race up St Judes Avenue.
Played badminton again this week with some folk from work. I was a bit disapponted following all my extra games last week - I thought I would have the edge, but, oh no, I was beaten in pretty much every game. This random Rasta gentleman kindly kept scores for our games throughout and provided some tips.
Went for a training run - my first run since March 30th. This run took me across Studley corn fields. Cody accompanied me on this run, but she wasn't too impressed. I think we both have abstained from running for far too long.
The limited training highlighted above plus my poor diet (including the likes of Mc Donalds, chinese and indian takeaways), poor sleep and intolerance of too much alcohol paved the way for my first triathlon - the 2010 Stratford 220 triathlon! 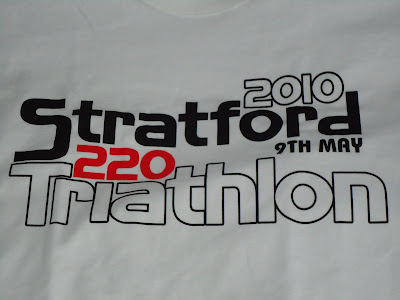 At the registration desk I was given my race number (674) which I had to pin to the front and back of my running top. Stickers with race number also had to be placed on my cycle helmet and bike bars. Before I left the registartion area a young guy with a marker scribbled 674 on my left arm and right leg. I was given a goody bag which consisted of said numbers plus a pen, t-shirt, safety pins, bottle of Gatorade, 2 x high strength Jointace effervescent tablets and much useless leaflets attempting to sell products. Took bike to transition area and made ready for my race. My bike set up hasn't felt right ever since I removed the seat tube to add a bag bracket. Furthermore, my bike is also still equipped with those mudguards which, as good as they are, they rub a little (and the weather is much improved of late). No time to worry about that now. I placed my cycle shoes, helmet and gloves one side of the bike and my running shoes the other. In the middle was my towel and my running/cycling top. I was now just wearing shorts (slightly embarassing) and painted pink toe nails (very embarassing) and made my way to the swimming pool for the start of the race. (My nails were painted pink because my friend Roxy from work had a few idle minutes and painted said nails whilst I was busy in front of the computer). 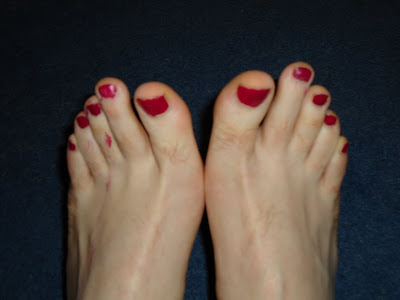 At the pool side, all competitors started 15 seconds apart. My pink toe nails certainly gave folk something to talk about. At least they matched the swimming cap we had to wear (am not sure why this is compulsory). The swim course consisted of 12 lengths (4 lengths in 3 different lanes). The different lanes made length counting easy. I felt better than expected, but could feel a slight ache in my arms when I left the pool and my chest wasn't brilliant. A brisk walk took me back to the transition area.

Located my bike and gave myself a quick dry. I couldn't get my shirt on for a while (I wasn't dry enough and it kept sticking) but after much effort I was sorted. Dried my feet, put on shoes and off I went. The start of the cycle route was congested with traffic but after 1k the roads were clear. I didn't feel as good as expected (painfull chest) but was making good time during this part of the race. I passed a number of riders, quite a lot in fact, but was overtaken by 2 riders myself. The route was quite flat on the whole, but there were a few climbs. The original course should have been 23k, but due to road works was shortened to 18k. I would have made more time up given a longer route. Made it back to the transition area, placed my bike and changed into running shoes.
At this juncture my legs felt really weird. I felt dazed and the sun it was shining bright. Thankfully, some girls were handing out sports drink. I took a few sips and off I ran. I think I shuffled more than I ran. The run route was nice, very pretty, and followed the river for a while. The whole run was off road which I didn't expect. This 5k seemed to take forever too (it felt more like 10k). I felt I must have done ok, because I passed a number of folk who had race numbers lower than mine (we were started off in numerical order 15 seconds apart). When I passed the finish line I was a real sweaty mess, but felt great that I had now completed my first triathlon. I finished in position 425 out of 637, with a total time of 1 hour, 16 minutes and 33 seconds.
Triathlon totals: 400m swim - 11:12; 18k bike - 37:17; 5k run - 28:04
Weekly totals: Ran 1 hour and 3 mins; Cycled 27 miles (2 hours and 3 mins); Swam for 11 mins; Played badminton for 1 hour.
at May 09, 2010