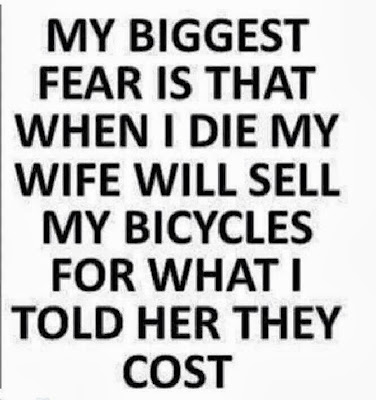 Didn't cycle long or far this week. Is always hard to pedal when 5 night shifts in one week have to be worked and poor SJ and baby were not well either - bless them. Managed to get out on 1 occasion though.

On the day I managed to cycle, I took Queenie, my single speed MTB out for a blast. I cycled locally and took Queenie on and off-road to test the new forks she had been fitted with. The old forks were Rock Shox Judy's that must have been years old and weren't working so well. The new forks were a budget set of Rock Shox forks - XC 30's. Very pleased with these new forks. They felt heavy before they were fitted, but once on, the bike felt great. These XC 30's did a super job of smoothing out everything at the front end and the lock-out button worked a treat. Such an improvement over my Judy's.
However, despite the forks working great, the rear brake lever failed. There is 'always something'. Have had a few problems with these budget Promax Hornet disc brakes, though all problems have been with the rear set. Am considering replacing the rear disc brake set (with anything other than Promax Hornet) but will leave the front until it needs replacing. Hmm, suggestions on a post-card please.

Have also entered another event. This event is called the 'St. Crispins Day Night Ride' and is a 100 mile affair to collect and return with a bottle of wine. This will be the furthest I have ever cycled for a bottle of wine! This was one of my buddy's ideas, you know, that dude Chris Hodge. Enough said. Ha! Chris has actually built up 'Kay O', my single speed road bike ready for this adventure.