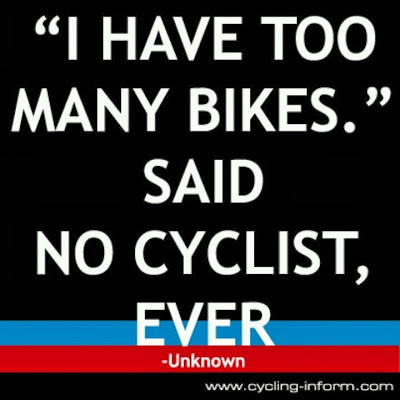 This week began with a cycle of the BG SR 2 route. I like this route, consider it nice and relatively fast with a little sting at the tail end. You can see from the profile pic below that the route wasn't too testing, but believe-it-or-not, the last incline was actually a 4th category climb!
Despite the route above not being too testing, I tested a bunch of new stuff. Chris had removed my old Ultegra cranks and Look Keo pedals from my road bike (with view to adding some of these parts to my single speed project) and replaced same. My new cranks were a more modern version of the aforementioned Ultegra's. The previous cranks had been used heavily since 2009 but remained pretty much problem free - highly rated! These new cranks worked fine, felt smooth and to be honest felt no different to the previous set. My new cranks, however, looked amazing and were way more aesthetically pleasing!
My new pedals (Look Keo max 2 carbon) were very similar to the previous ones too. These new ones were essentially the same but a slighly higher model. Wiggle helped explain the difference between the two. 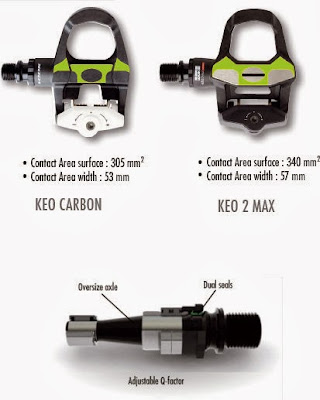 Basically, my new pedals are lighter and have a wider contact area. In use, I noticed no difference at all. I just love Look Keo pedals and remain a big fan. 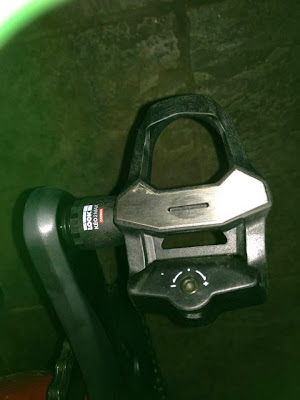 My final test was my B+M Lumotec light. This was a cheap (around £20) dynamo light that I got from eBay after returning my previous B+M light that I used for LEL. This new light was very basic, it had no special features and only lit when the dynamo was turning. Previous light had day/night sensors, a switch, was twice as bright and charged USB. This light was just okay. I think this light probably makes a better commuter light than a long distance light but for now it will do. I also think I need to tilt the beam somewhat. 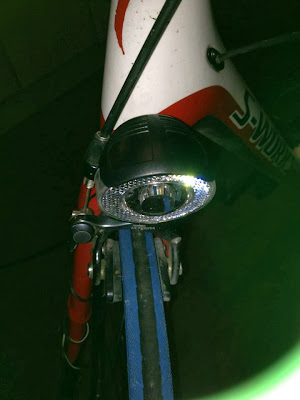 My next ride was the Yatmon 150k permanent audax. This was a lovely cycle organised by Steve Poulton and was my first crack at it. Quite a hilly affair, scoring 2.25 AAA points.
Started this event from Tewkesbury. Initially was lulled into a false sense of 'whatever-the -word-is', as no hills were encountered for at least the first 25k or so. When the hills did arrive, they were not that bad and certainly didn't compare to the horrors of the Cotswold Corker or Stroud 5 Valleys. The first hills were just before the control in Mitcheldean. I didn't get a POP here - the place was tiny and I found I had left Mitcheldean (whizzing down a sweet descent) before getting a POP. I made sure I got a P.O. stamp from Drybrook, a village next door, and hoped that would suffice!

The route had been lovely, mostly lanesy and this continued pretty much throughout. A very scenic route and from Mitcheldean right through to the Forest of Dean was probably the most spectacular. Just before reaching the Forest of Dean, Goodrich Castle could be spotted in the distance.
Goodrich Castle brought back thoughts of my old buddy Chris Poole(monkey). We visited the forest via MTB on a few occasions and indeed even visited said castle. I wonder if Chris still cycles?!
I stopped at Goodrich P.O. and got a stamp for my brevet card. After stamp I headed for Symonds Yat, which I thought was going to kill me. The ascent up Yat Rock Climb was not that difficult at all! It was nice to finally take a road bike here after cycling it so many times on my mountain bike. After a quick visit to the Yat Rock log cabin (POP purposes), I just had to visit the viewing area. 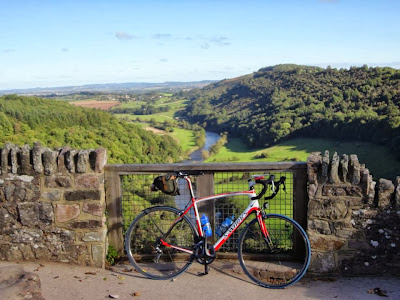 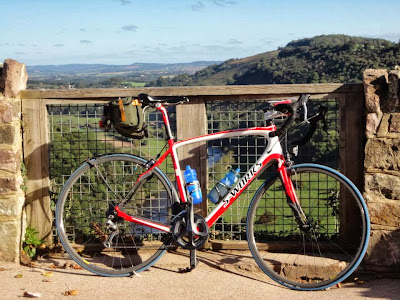 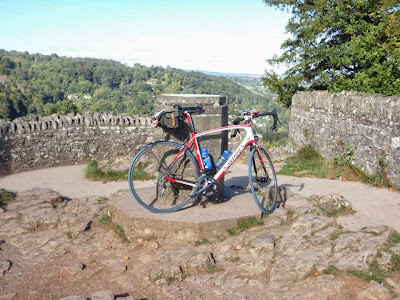 Fantastic roads led away from Symonds Yat and the route cleverly turned back round and enabled me to cycle the other side of the river. So beautifully stunning. Incredible scenery. I remember praising God for his wonderful creation!

Next stop was Monmouth. Had visited Monmouth on a few occasions in the past from cycling other audax events. The choice of shops here was huge. I opted to use the P.O. for my control proof - not the P.O. stamp (couldn't be bothered to join a big line of folk waiting at the counter) but an advice slip from the ATM.

From Monmouth, the route led to Grosmont and then turned back on itself and led away from Grosmont on a parallel road. Very pretty indeed and long quiet country lanes. I think I spotted a stone circle roughly here at the 75k mark - there were definately some standing stones. Should I cycle this route again I will make sure I explore a little more here. Was hoping to get a stamp from Grosmont P.O. but thieves had broken into the P.O. only 2 days back and stolen the stamp (plus other stuff). Without a stamp, I stopped at the cafe next door and just had to order a big ploughman's lunch - just for POP purposes you see...

From Grosmont the route was quite undulating in nature. Before long, I was on familiar terrain and cycled through Hoarwithy to reach Much Marcle which I had cycled several times over in the past but in the opposing direction. A local store provided my POP.

The last section passed through Redmarley before reaching the arrivee in Tewkesbury. Redmarley usually means a bike covered in red mud. No mud covered my cycle on this occasion because it hadn't rained and all the mud was solid. No wet weather this day but boy it was very cold despite the sun shining bright. Quite a windy day it was too. Once in Tewkesbury, I used the P.O. for my final brevet stamp.
The Yatmon proved to be a great day of cycling. Lots of spectacular scenery. Oh, and don't forget the relatively easy 2.25 AAA points.

Another achievement reached by completing the Yatmon 150 event too. I managed to get my 'missing' 150k distance badge and hence complete the set. Every four years, the design of these badges changes and now I have 2 complete sets. Despite cycling so many audax events, there are relatively few 150k events on the calendar (hence it taking me over a season to complete this badge set).

Over the weekend I cycled my first calendar event of the 2014 season. This event was the Droitwich-Lechlade 200k audax organised by Gavin Greenhow. It had been a while since I last rode one of Gavin's routes.

As the name suggested, Gavin's audax started in Droitwich. I had not expected many folk to ride this event (as it appeared to have little interest on the YACF website) but 15 or so cyclists had gathered at the start. Despite not being great with names, I recognised a number of faces. Of the faces I could name - Roy, Paul and Trevor were present and so was dear ol' Mary. Gavin, as is usual for him, rode this event too (he was wearing pumps and full on waterproof attire). Most folk at the start were donned with shoe covers - did they know something I didn't?

From the start, things were mostly going great. Most folk were cycling together as a group and good progress was being made. Then disaster struck - the heavens opened. Not to worry, most folk stopped to layer up with water-proof gear. Back on track and then disaster struck again - I had a flat. My flat was menace - I didn't want to replace the tube just now because the rain was so heavy so decided to just inflate the tyre some and continue. The group had left me behind now and following my route sheet was a tad difficult. Luckily a couple of stragglers came past and I followed them. Keeping with them was a tad difficult as I could feel my tyre deflating but I knew it wasn't too long or far to the control. During this time, my buddy Chris phoned and spoke about my (his) single speed project which helped balance the chaos I was in. When I reached the control (a garage in Cheltenham) most folk were there chilling out. By the time I had replaced my tube, the group had long gone.

The group had gone and so did the rain! The sun was shining now and I felt like I was cycling a solo permanent event for a while. Gavin's route had been advertised as a 'flat' route. Strange that - I was now cycling up the first (of at least 3) 4th category climbs! A lot of familiar road was cycled all the way to Lechlade, pretty much the half-way point. I chose not to stop at the Black Cat cafe after YACFers complained about it. (I had previously used Black Cat cafe and found it okay). Instead I stopped at Lechlade garden centre which I found pricey. After a quick fuel up, I was off.
During this section, I caught a fellow rider (but didn't catch his name) and cycled some very pretty roads with him all the way to Cheltenham. At Cheltenham, we went our separate ways (because both wanted feeding at different stops). After cycling close to Bishops Cleeve, Gavin had caught me and we cycled together for a while - all the way to the next control in fact. At this control, the large group from the start was mostly together again. Was good to see Trevor here because he had punctured not long after me.

The last stage was ridden together (mostly) as a big group, just breaking up and fragmenting here and there. This stage was horrific as the heavens opened once more and chucked down the rain hard. I was like a drowned rat cycling through rivers. We got to a locked railway crossing which caused some confusion. After a time, a grumpy rail worker came out of an un-lit gate house and allowed us safe passage (school of thought was that perhaps he was asleep). From this point it was just a wet race to the arrivee.
The Droitwich-Lechlade 200 was a top event. Great company and a decent organiser. Feel Gavin's rides should be better supported. The ride finished with a great eat (nicely discounted) with fellow cyclists reflecting on our adventure.

Cycled 3 great rides throughout the course of the week. Total distance was 406k. My total yearly distance now stands at 10,552k and am hopeful more adventures are to be had.