First perm of the 2014 audax season

'Life is like a ten speed bicycle. Most of us have gears we never use'. - Charles M. Schulz

The Audax season is a funny thing. The 2014 season began on 1 October 2013. No more bizarre than Santa Claus and similar paraphernalia being seen in the shops and pubs during this same month, I suppose.

My first ride of this 2014 season was a quick blast around Ron's MTB safari loop. I took Aid's 29er to get a feel for 29er's off-road. Aid's bike faired well, the 29er certainly helped reduce a lot of judder and rolled smoothly over dips, ridges, troughs and the like. As readers may know, I have a 26er. Current school of thought is pushing towards the 27.5ers!

My first perm of the 2014 season was the classic Cotswold Corker 100k event. I have ridden this event so many times now but it remains one of my favourites. It's a hilly affair as the profile below demonstrates.
The ride (the way I cycled it) started off with a climb - up Cleeve Hill. Then a nice descent took me to the first control in Bishop's Cleeve. From Bishop's Cleeve came the horror of Bushcombe lane! 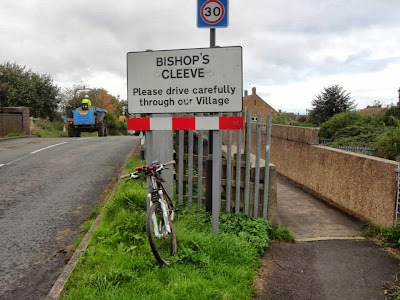 Bushcombe Lane is the biggest beast during the whole route. The road sign says it is a 25% gradient though other sources say nearer 30%. Once the ascent was conquered, I was treated to a zoomy descent back down Cleeve Hill and back into Winchcombe.

The next biggest hill was encountered almost straight away from leaving Winchcombe and took me up Sudely Hill. Some say this is the toughest hill (on the profile it looks that way) but that was not my experience. The good thing was, once this hill was conquered there was none this severe again.

Next stop was Northleach. I now like to stop at the Black Cat cafe and use this as my control proof. They have a stamp - of a black cat no less! 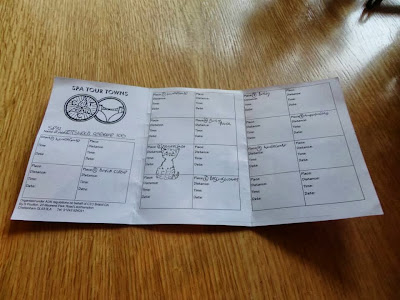 This was my second stop at the Black Cat cafe. As well as stamping my brevet card, they also stamped my loyalty card. Have no idea how exactly this loyalty card works. On route to said cafe, I passed a couple of cyclists. These cyclists followed me to the cafe and then a whole bunch came inside. The food here was great (I had panini) and the cafe makes a great cycling haven. The collection of cycles outside the shop made a pretty picture. 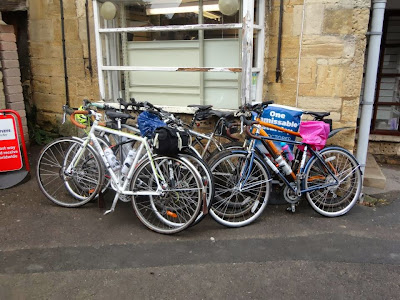 Bisley was the next stop control. I mostly stop at the Post Office here and have a quick chat. The P.O. provide a stamp for the brevet card too. Just before Bisley, another 'menace hill' was encountered, 'Watery Lane'. The P.O. provides food as if to reward the cyclist for their endeavours!

Lumpy paths lead to Andoversford. This is a nice trek and a un-known stone circle is passed and some topography. Maybe I should name this stone circle myself?!

From Andoversford, only 10k remained until the arrivee. This section started off as a fast descent. A gentle climb was in the middle before an epic descent (past Belas Knapp) led to the finish.

Completed the 100k Cotswold Corker in a time of 5 hours and 50 mins. Bagged myself 1.75 AAA points. Am only 23.25 AAA points away from the new quarter century award! Ha!

Aid rocked up over the weekend to show me his new steed. He had converted his old Voodoo machine into a trusty single speed monster. I just had to jump onto my not-so-trusty single speed 'Queenie' and join him on his debut single speed affair. Strangely, my Judy forks that had previously collapsed were now working fine?! Have decided I am going to sell these forks on eBay and fit my more recently acquired forks anyhow. 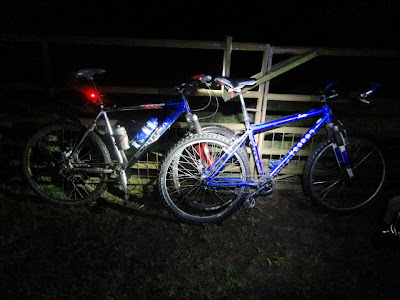 Just because single speeding is so much fun, we had to go out on another adventure the following day. Am sure more adventures are to be had on these single speed machines. Better yet, Chris has taken my Focus frame and bits and is hoping to build up my single speed road bike - yay, can't wait!