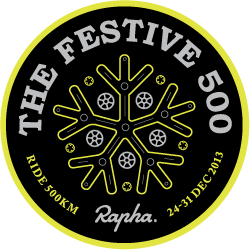 Ride 1 of my Rapha challenge was wet and miserable. I cycled just over 60k on my single-speed road bike. The average temperature was about 2C, so I didn't stop to take any pictures. A GPX track of my route is presented below.
Did not cycle on Christmas day, despite it being dry and not windy at all. Had a great day with family and felt truly blessed. My little Lunar the elf provided ample entertainment!
Boxing day was spent at work to start with then a trip with my little elf to see more family. Obviously did not cycle today. With only 12% of my challenge covered was beginning to think 'oh why did I ever enter this'.

Back on the bike on Friday. Decided I would take the single-speed out for a blast before my wife woke up. Didn't quite work - SJ shouted a request from the bedroom that I didn't go, just before I reached the front door. The wind was howling like crazy. I assured SJ the weather wasn't too bad and cycled in some strong winds. The winds were blowing at about 25mph (which was nothing compared to the 80mph gusts reported on the news over recent days). This was a tough ride and to top that I was feeling out of sorts and was sporting an unsightly cold sore. Ugh! Was too windy to take any pictures. I cycled about 68k and my GPX track is presented below.
Saturdays ride was great. SJ suggested that I cycle the back road to Evesham - so that's exactly what I did. I stopped at Raphael's cafe and better yet, was joined by SJ and Lunar for brunch.
The cycle home covered similar tracks to yesterdays ride. I cycled to and through Bidford. For a change I cycled through Coughton which was somewhat flooded. My GPX track is presented below.
False start to Sunday's ride. I got up quite early (about 6 a.m.), dressed in my cycling gear and readied my bike. However, once out the front door it was game over - Jack Frost had covered the roads in that thick white stuff. Not sure why but I ventured to the top of the road to see if it was any better. Of course it wasn't - ride abandoned. Later in the day when the frost had disappeared, Ron and I went for a jolly. Aid initially said he was free this afternoon but we heard rumour that the fair weather fairies had gotten hold of him. Ron and I cycled a good 50k plus. Just as we were nearing home, Jack Frost came back out which caused Ron a wee skid. Our GPX track is presented below.
At this juncture I had completed about 50% of the Rapha Challenge (all on a single-speed bike) which basically meant that I had a further 250k to cycle. A 200k ride was needed to keep my RRtY award going too. Did I complete these challenges?! - read the next blog instalment and find out! 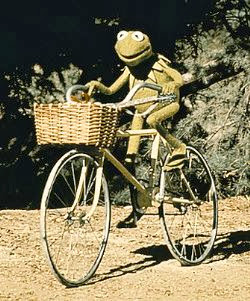