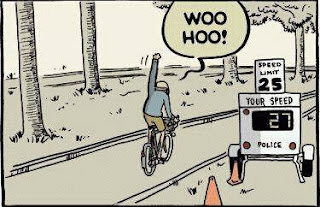 First ride of the week was a lap around my 'stolen' BG SR 1 route on my single-speed road bike. Had been so long since I last cycled this route that I had trouble remembering it as I went along. Such a great ride - very scenic, relatively flat and fast.
Second ride of the week was a bit of a disaster. Had decided to enter the Tinsel and Lanes 200k audax. Initially my mate Jamie was cycling this too but had to pull out a while back due to family commitments. My buddy Chris was also hoping to ride and I was looking forward to his company. However, at the 'eleventh hour' the Southern Fairies got hold of Chris and put pay to his plans. Two DNS's (did not starts) and some say 'bad luck comes in three's'...

There may be some truth in what people say. Despite the DNS pair, I figured I would complete this audax all the same. Once at the start there were a fair amount of folk I knew from previous rides. Left the Pretty Pigs pub in Tamworth at 8 a.m. and I felt fine cycling at the front of the pack chatting with a random other. After about 3k in and I heard a 'click, click, click..' and damn, blast - I had a broken spoke on my rear wheel. Grr! 2 DNS's and now a DNF (did not finish). This was my second DNF to date. At least this mis-hap was right at the start. Continuing wasn't really an option as now the wheel would rub against my brake pads and goodness knew what might have happened next.

With my road bike momentarily out of action, I decided to take my single-speed out for a shorter spin. And what better ride than another trek along my BG SR 1 route?! I took this ride more leisurely and stopped to take a few photo's to help paint this ride with pictures.
Cycled a total of 100k this week. Pah! Yearly total now stands at 11,719k.