On Monday I completed my 200k DIY perm, 'The not-so great figure of eight'. This was a great adventure shared with three of my buddies - Chris 'Orange', Ron 'the Phantom' and 'new guy' Adrian. My post event thoughts are summarised below.

We started the event from my abode, Doo Little, at about 7.30 a.m. Much faffing at the start. Chris was sorting Garmin issues (I think), Ron had forgotten his phone and Adrian needed to be introduced to Chris and myself, as well as Lunar and SJ who were waving us off. Anyways after much ado we were off and cycled to a local HSBC for my start proof.

The first stage was relatively short and took us to Henley-in-Arden. First stretch of road was country lane but then some busy main road had to be navigated. Members of the group had a little moan, however the road wasn't that busy to be fair - it was only rush hour traffic! Another ATM provided a control proof.

The next section left Henley and retraced the same busy road before continuing on to Matchborough. Ron hates rides where the same stretch of tarmac is ridden over in both directions. There wasn't a lot of tarmac that was ridden over in this manner, but there was some. In fact 2 stretches during the route had some out and retrace menace. It was for this reason that I named the route 'not-so great'. The route, also, was a not quite a perfect figure of eight.
From Matchborough the route was much nicer. Buss only lanes carried us to Arrow Vale Lake which was real pretty and along some of my commute route. We cycled through Redditch Town Centre and past 'The Hardy's' (friends of mine) largely following cycle lanes. Once past Webheath the cycle lane became country lane. Dirty, wet, mucky country lane that passed through a ford before becoming nice. clean country lanes. We got a bit of everything on this ride! Poor Adrian was using his 'best' bike, a carbon Pinarello - well, it's the only bike he owned! When we stopped we were at Whitlenge tea rooms - a very welcome stop. We all had a full English breakfast washed down with much tea. Delicious!

The next section, again mostly on country lanes, took us to Bidford. At the cross roads we stopped and pondered. This junction confused me last time around but we navigated ourselves correctly and reached control with no problems. A bottle of Ribena was purchased for POP purposes.

From Bidford we headed for Winchcombe. Winchcome is a beautiful village hidden away in the Cotswolds. Folk found it hard to believe that I could create a flat route that would pass through Winchcombe but a flat route I found! The picture above proves the flat profile of the ride. We never climbed higher than 150 metres at any point. Sure enough though, hills were present and evident everywhere we looked. Our stop in Winchcombe was nice - we ate at the 'Lady Jane' which made me think of my Mrs. 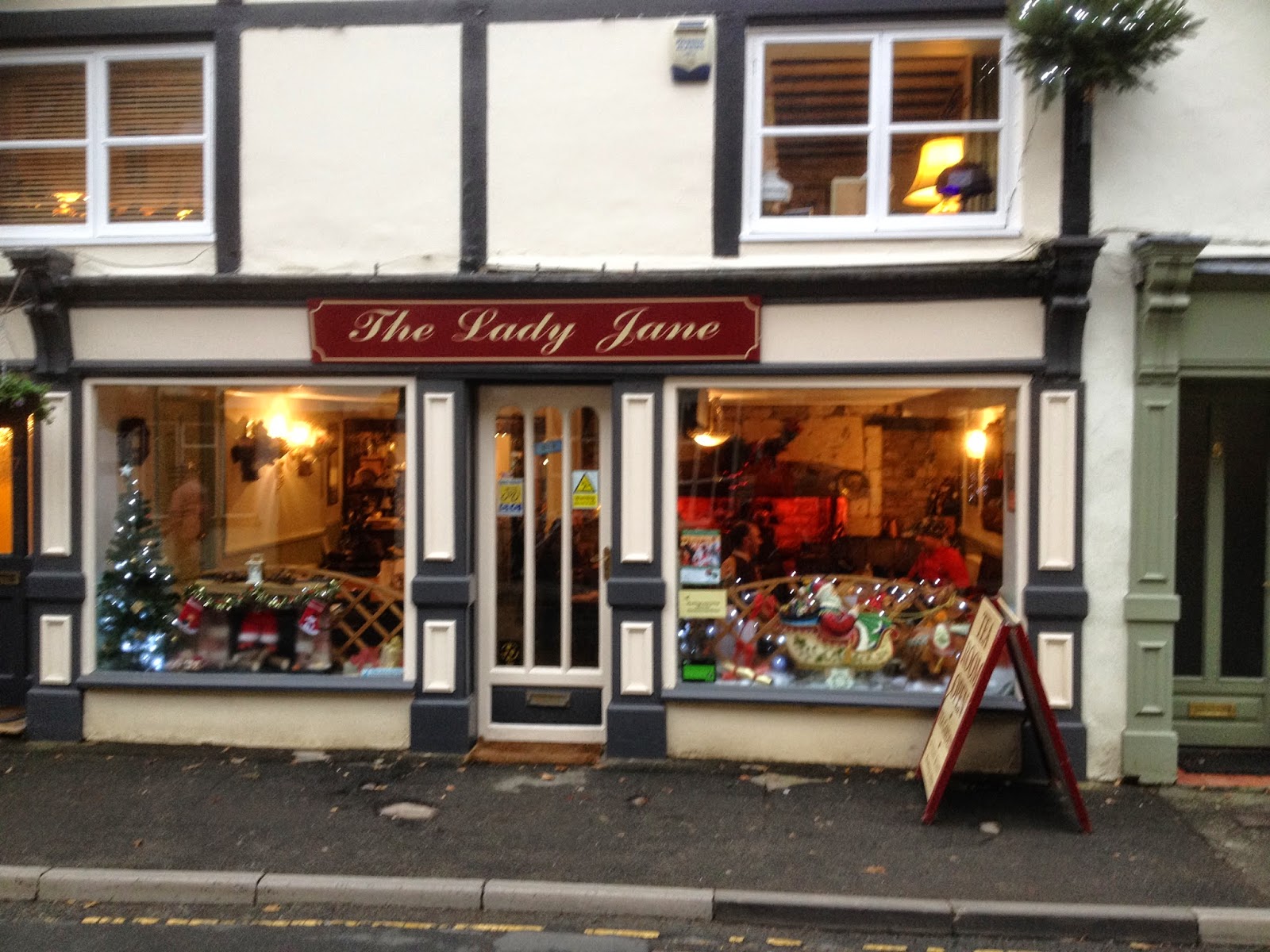 Inside, we all ate a nice boozy beef stew dish with much vegetables. Delicious. Oh, and we consumed more tea too. Once back outside, brrr, it felt cold.
Bishop's Cleeve was the next stop which is a place name that never ceases to make my giggle. This was quite a zoomy stage, especially as Ron was playing 'catching the pig pigeon' with a cyclist just ahead. We decided to let the pigeon go and keep our group together. Again, an ATM provided my necessary POP receipt.

Evesham was our next stop and a long, flat, fast road took us there. Some of the roads were getting a little busy as we made our way. Perhaps a better route could have been used to avoid such busy roads.
It was dark by the time Evesham was reached. A quick stop at a garage for chocolate and POP purposes and we were off.

The next stage was much nicer. Quieter roads took us on our way to Upton. We passed a Mariner at one point which reminded me of adventures Chris and I had on his mothers boat. Upton was such a pretty area, it was on the Severn (actual name is Upton-upon Severn) and the Christmas light had lit up the place admirably.

Last section was quite a stretch but on nice roads for the most part. Much country lane and even (another) ford crossing. Ron wanted to go a different route home but Chris ensured we stuck to the correct route. Am pleased to inform we all got back to Doo Little safe and well with no major mis-hap or menace. Adrian had to leave almost as soon as finishing, but the rest of us had other plans...

...we went and celebrated our achievements with curry and beer! Jamie McCloud should really have been celebrating with us too, but his time will come. I didn't think one could have too much of a good thing and complained that there wasn't curry enough. Chris says I eat too much and that's why I'm fat. He said, I quote ''you have no portion control'.

As well as Chris making rude remarks he also stole my bike frame! That's right, he took my Raleigh Esprit bike frame without my knowledge! In fact, that's great - it means Chris may well take ownership of building my retro bike up for me. I'm real pleased because it has to be said that Chris is great at building bikes and I am not. I know my limits. I am better at getting folk to complete tasks for me rather than doing it myself. Chris has built umpteen bikes up since I've known him and he built up my single-speed road bike - the self same bike I used on the audax above.
My retro bike build plan was to simply build up an 80's bike retro style and pay as little as possible in so doing. I had set myself a goal of building up a bike with a budget of less than £150. To date, I have spent £126.79 with just a few things (like cables etc) still to acquire. Some items were donated which was a bonus. Have no idea when said bike will be built but remain excited about the prospect.

During the week I managed a couple of work and back commutes. I could hear a creaking noise from my cranks on the first commute but could see no problem. On the second commute, the problem became clear - my bottom bracket was trying to leave the frame!
I have cussed Evans bike shop in the past. However, they were 'top dog' when I took my bike to them on this occasion. They tightened up the bottom bracket, tensioned my chain and cleaned my bike - all free of charge! Wow, that's service. Dave Hinde still remains a poor excuse of a bike shop. Have I ever mentioned before that the service at Dave Hinde sucks?! Sadly, my Hope Vision 1 light has become faulty too - after me raving about it too. Whatever next?!