This week started with the completion of my first qualifying event for PBP. This event was the '2 Battles' 200k audax. An event that I have cycled before as both a permanent and calendar event. At just before 8 a.m. I met up with Chris, Jamie, Andy and Trev ready for the start of this adventure. Each and everyone one of us had that 'can't be bothered attitude' and had clearly lost our mojo's. The weather was pants, it was cold and wet with dark clouds above. Chris and I were testing some 'secret' video recording camera's but my phone app was playing up too.

Once we set off, it just got colder and wetter. Despite wearing waterproof shorts and shoe covers, my bum and feet still got wet. Slowly, I lost feeling in my hands and feet were becoming numb. Chris and I kept losing contact with 'the lads' before gaining contact again. I think we got to the first control before the lads but definitely left after them. Chris and I had a real proper audax breakfast you see - beans and eggs on toast - the lads just had cake.
This was a welcome stop. Not only did I eat well, I stripped off many layers and allowed my stuff to dry (or at least warm) on the radiators. Am quite the professional now... 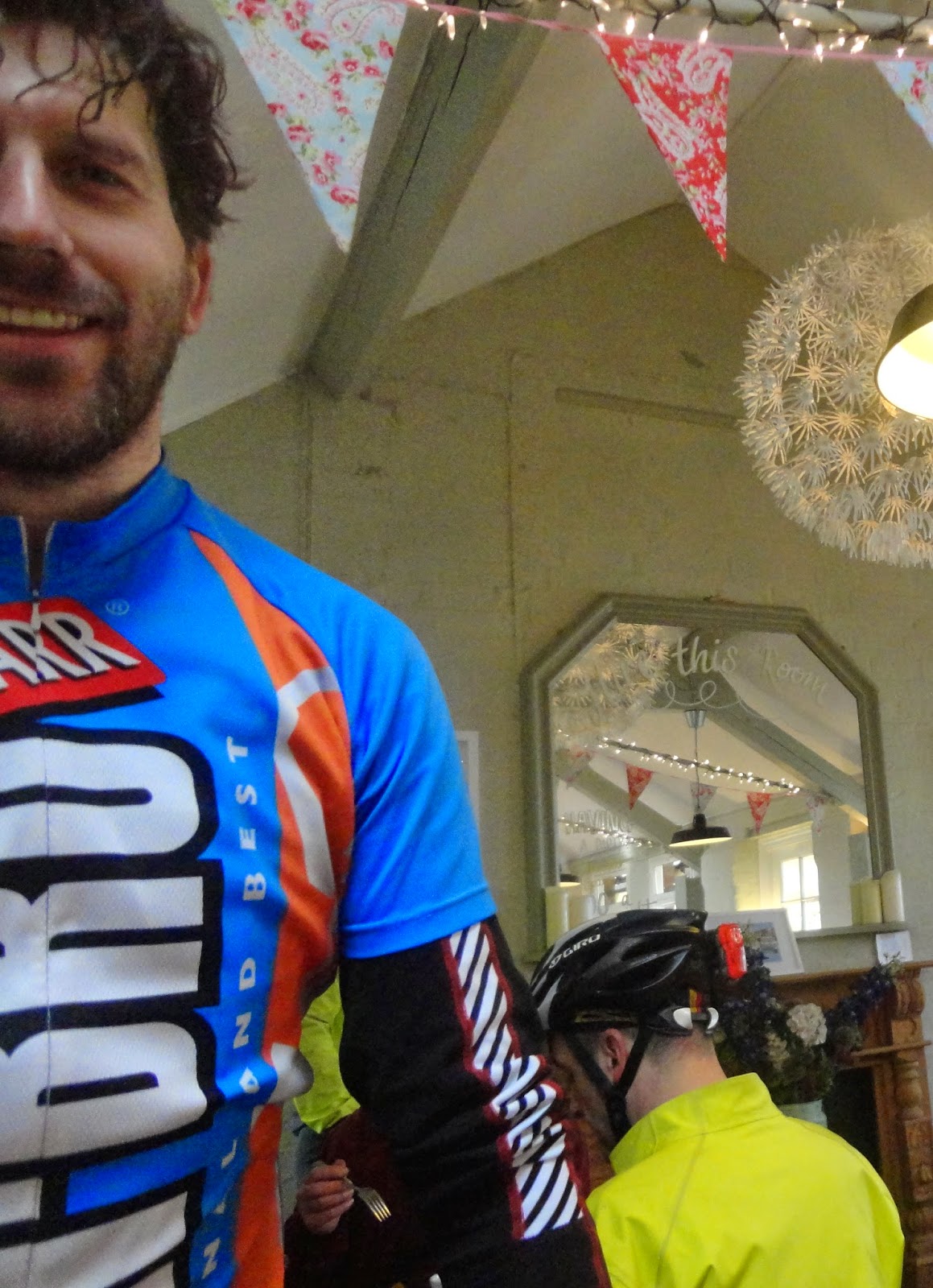 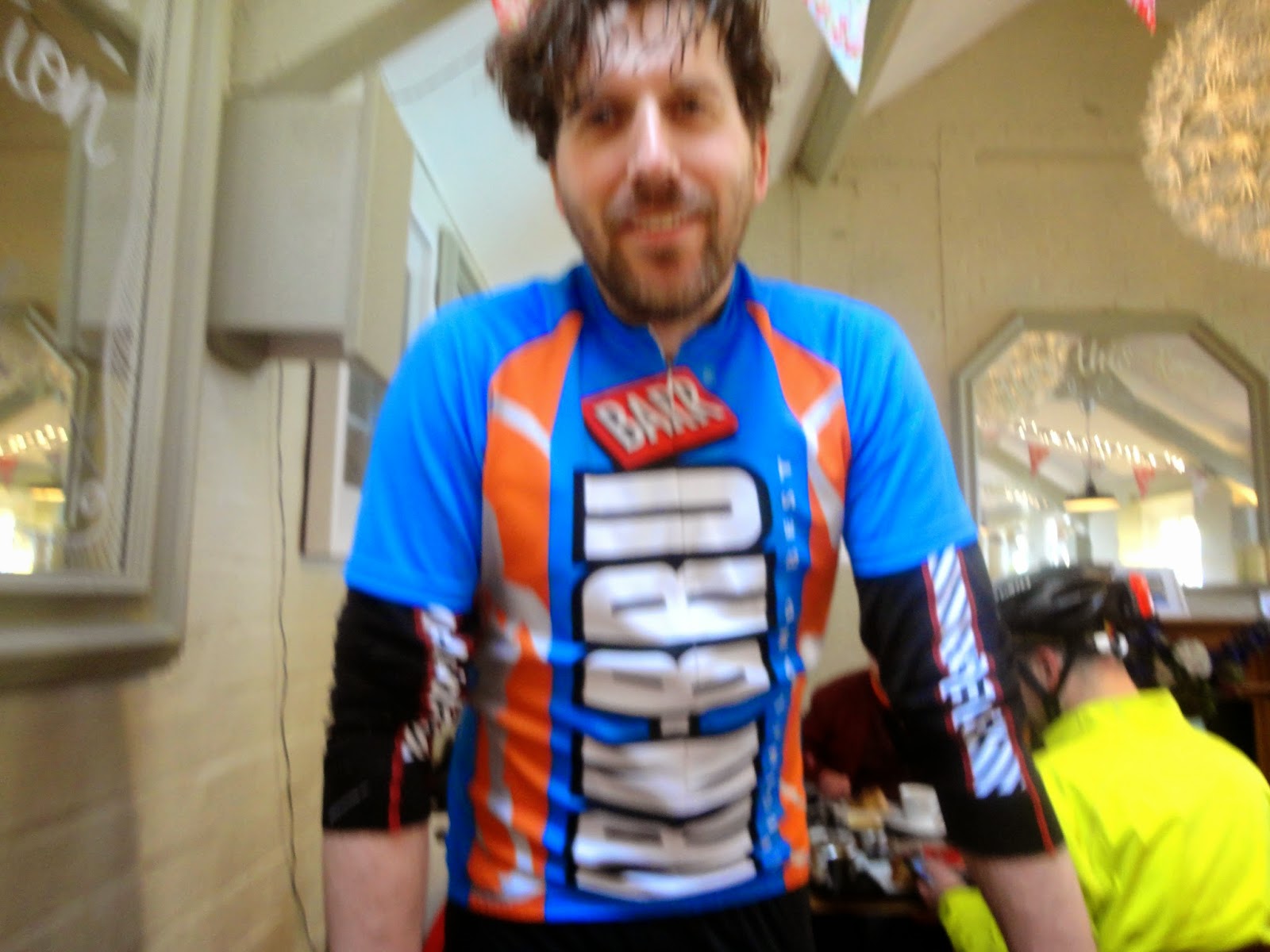 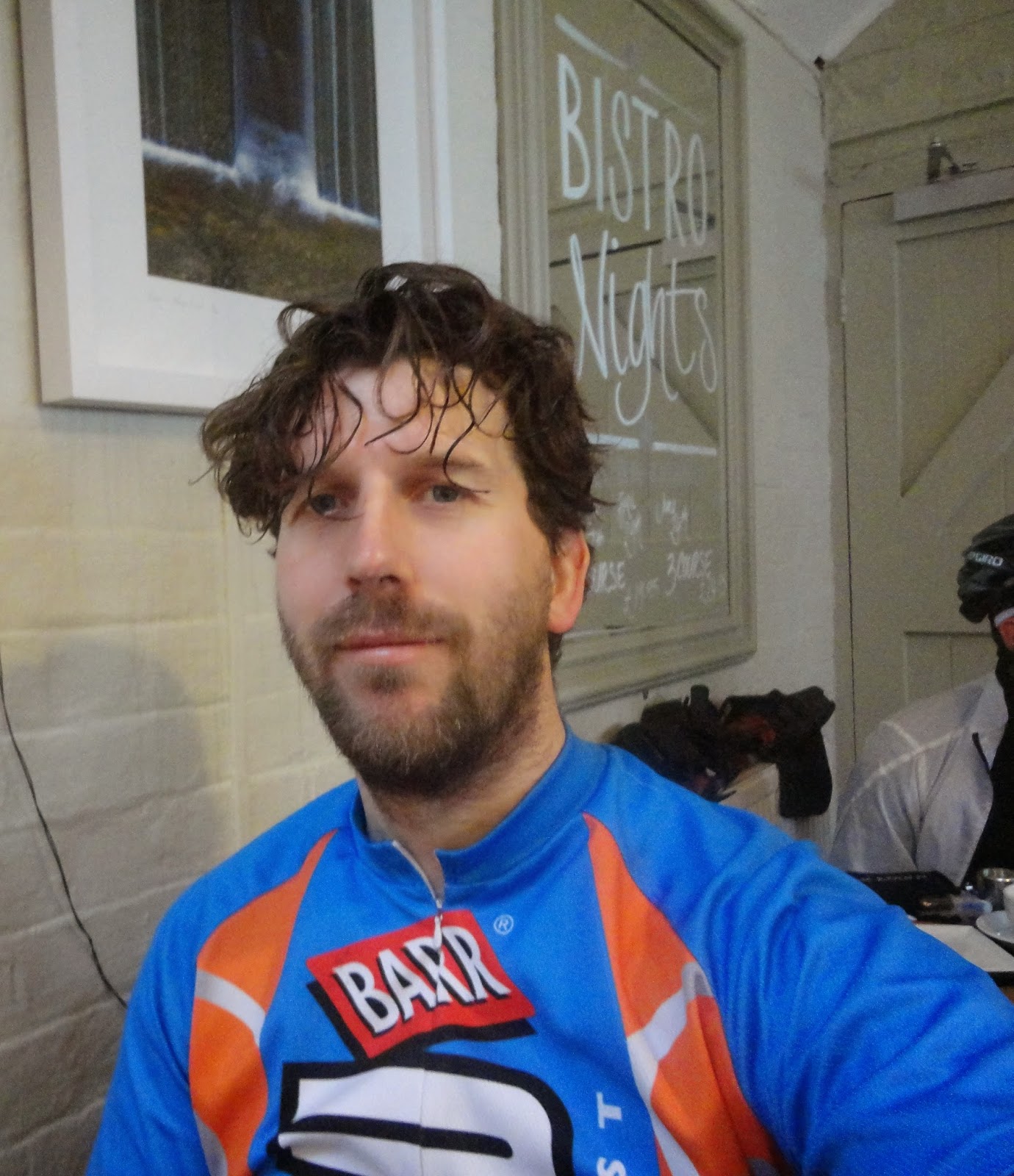 We had cycled about 50k up until the first control. Now we had eaten breakfast, the rain had gone and the sun came out. Blue skies replaced the grey and it didn't rain again. Fuelled, dry and returned feelings to my digits, this section proved a little better than the first. The route was a lot more lumpy than I remembered though with a few tough climbs (with some cyclists walking).
We had an info control at the 80k point, where we had to name a pub. The pub was called the 'Witch and Sow', probably named after some of the locals in the village. We stopped for a short break here and after leaving I remembered my glasses were left on a wall. I returned to reclaim them witch was a bit of a sow (see what I did there?!) After about a further 20k we reached the half way point and the next control.

This control was ok but I felt ripped off paying £6 for a 'bowl' of pasta which was more like a 'saucer'. The lads had gotten here before Chris and I and left before us too. Much faffing as I toyed with layer changes and stuff.

This next section was tough. The wind was blowing against us which in turn was making us huff and puff. It was quite a battle fighting against it. 2 Battles, hmm, the rain and the wind? During this stage I stole a pull from a group of 3 others which helped me evade the wind for a brief spell. I chased after this group of three because I was convinced it was Jamie, Andy and Trev. It was only when I tried conversing with Jamie that I realised it wasn't him. Their likeness was uncanny, and I took a photo (at the finish) just to demonstrate what a convincing imposter this guy was....
The penultimate control was a Shell garage where we finally caught up with the real Jamie and the lads. I awarded myself with sandwich and ice cream for getting this far. Sadly my ice cream (actually a Feast) dropped off the stick before I could take my last bite. Oh well... 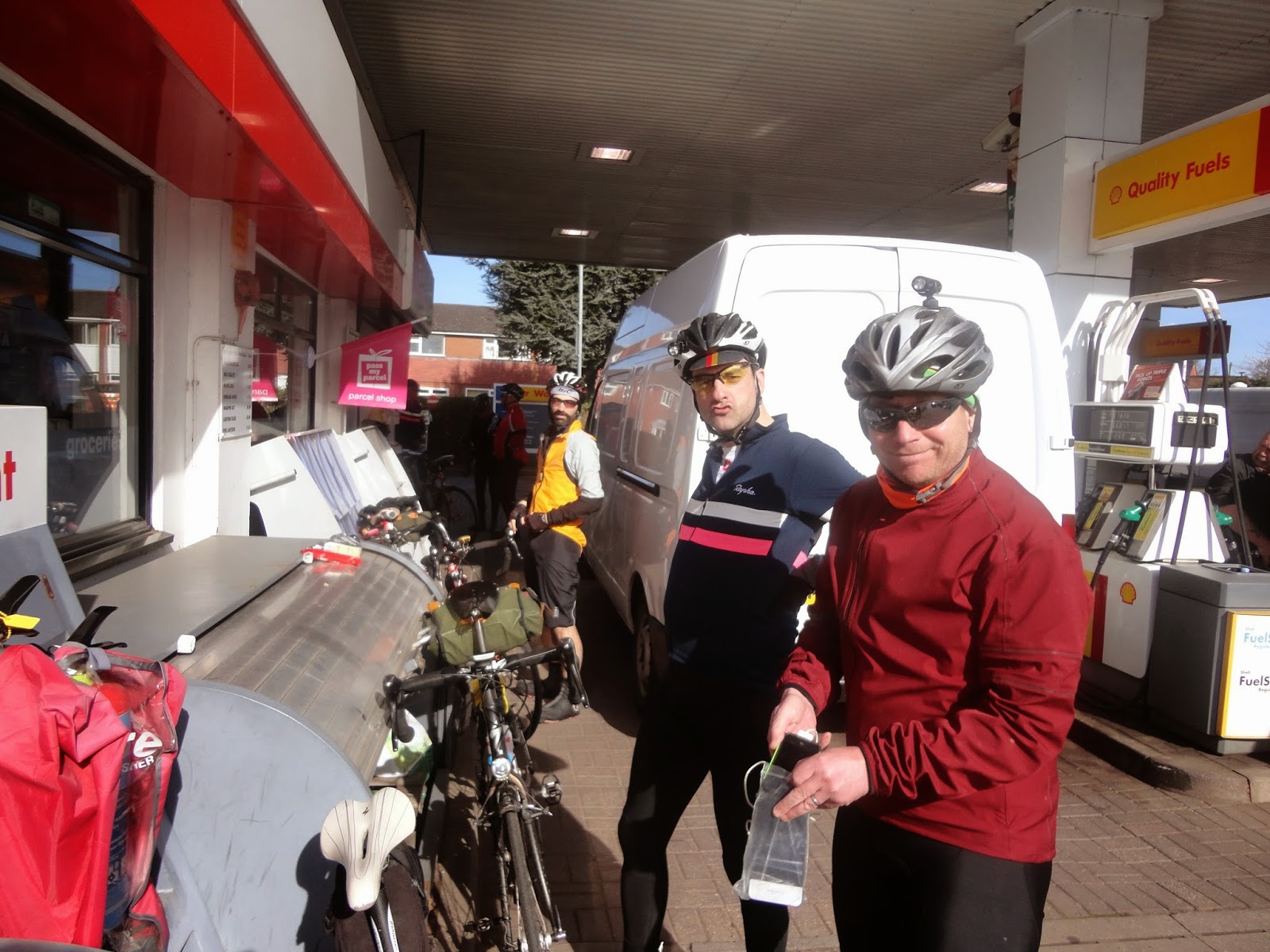 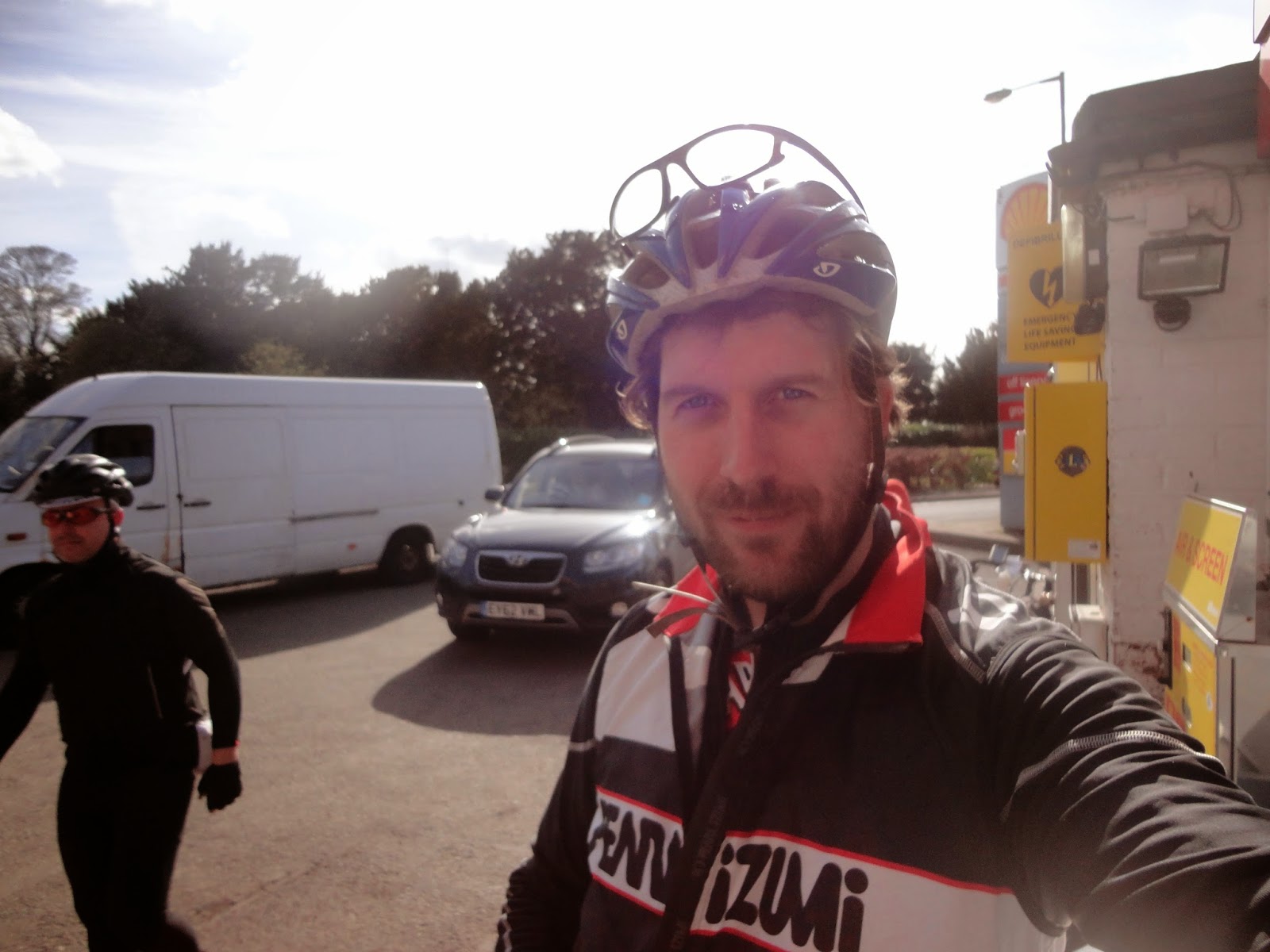 It was nice to cycle the final stage as a group of five. I think we were all a bit pooped but the banter and general chit chat helped us to forget our aches and pains and took us to the finish with no real worries. A relatively tough day out for a teeny weeny 200k qualifying ride - just a 300, 400 and 600k event to go now. Oh, and the 300k qualifier is next weekend...

Chris and I celebrated our achievement with a weird and wonderful fish carvery with ice cream and toppings for dessert. Delicious, made the hard work kinda worthwhile. Have no idea how our recordings went - Chris reclaimed his camera. Should he send me the finished movie result, I'll post a link to this wonderful blog.
at April 12, 2015