From Snow to Sunrise

Great start to the week. Early 10k (just short) run to wake me up. Ran up to the Slough and back on what appeared to be a bright shiny day. Had original plans to cycle the Sunrise Express audax route but the weather report looked grim. However, completed my run and checked the forecast which suggested there was going to be only light rain and periods of sunshine...

It didn't take long for me to convince myself to cycle the Sunrise adventure after all. I started this adventure from home and joined the official route at the closest point to my domicile, about 20k away. I joined the route about 20k away from the official start control too. Cycling to the first control in Evesham was nice especially as the tough hilly parts in the Lenches were now fast descents. Kinda looked strange seeing much of the same things in reverse order. I couldn't spot the hidden castle I saw on the Snowdrop but found the posh roundabout drive. 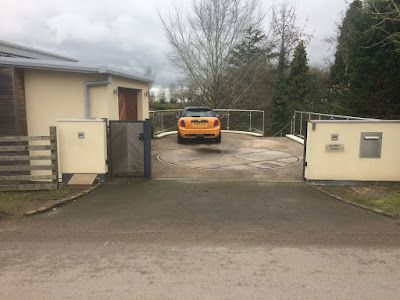 Stopped at a bar/café in Evesham and enjoyed a nice cup of tea and a short bread biscuit. I didn't have to stop as this was not really an audax event (was just cycling the route). Still, tea and biscuits go so well with cycling.

The next stage to Upton was somewhat slower in this direction but the scenery was better to look at. At one time, a huge flurry of hail came battering down. This hail hit so hard it really hurt my face. The hail was worth it though, just to see the pretty rainbow that followed. Clouds could be seen raining in the distance and this looked just awesome. God's creation is truly magnificent. Stopped at the same café in Upton as I did on the Snowdrop, but it was closed. Sat next to the river instead and tucked into my handmade sarnies with a bunch of begging ducks.

Next stage should have took me to Whitlenge Tea Rooms, however, I avoided the control and just continued the route. Surprisingly, before I reached Hartlebury, some of this Sunrise route copied the Snowdrop route (or vice versa) which meant that pig of a hill 'Pig Hill' had to be climbed. Grr! This whole stage seemed to take ages and was clearly the longest. This stage was made longer as I had to reach my start point - home. All in all, a good day cycling. Still think the Snowdrop wins.

Tuesday was spent indoors on the turbo trainer. Just a quick 30k using the Bkool app. I figured I might just as well use my free demo allowance. Worked ok, graphics just a tad jumpy. I cycled a live race and came last (though 2 cyclists did drop out before the finish). The whole stage had no music or sound - wonder if that's just a setting issue. Bkool takes into account wind and ascent/descent phenomena and gives you a virtual speed - I think that is pants because cadence/speed/heart rate are all otherwise accurate and you don't feel any different with this virtual speed. I wont buy a subscription to this app.

Next training day was Thursday. I cycled to Little Martin and back using my single-speed bike. I keep experimenting with different routes - this route back was too long. Am sure I will find a route I am happy with soon. Later in the day, went for a short run with SJ which was nice.

Friday was my last training day of the week. Gave the cycle a rest and instead ran the Studley Triangle. All in all, not too bad a week.