Oooh we Doo like this and that and the other!

'Ooh we Doo' like a week off work. This week began with a 6.5k run around my village. After my run, I set about packing my belongings up ready for a bike adventure the following day with Jamie.

Half the battle with bike packing is indeed packing the bike stuff ready. To help prepare for future trips and maybe see what worked and what didn't, I took pics of my bike bags and their belongings. They were as follows... 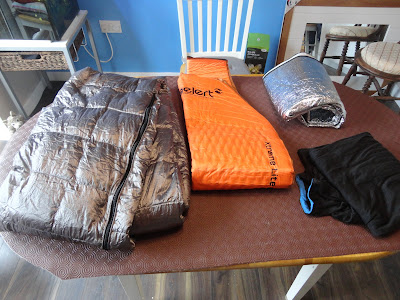 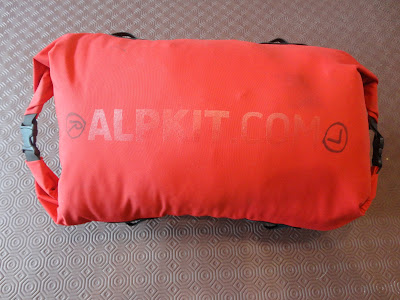 In the handlebar bag: 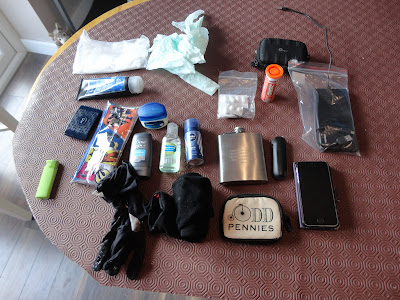 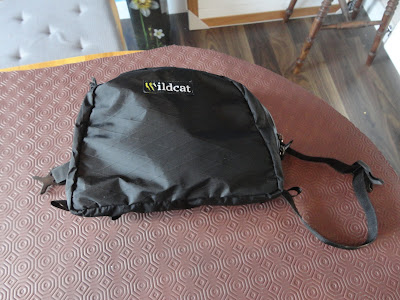 In the Wildcat (front) bag: 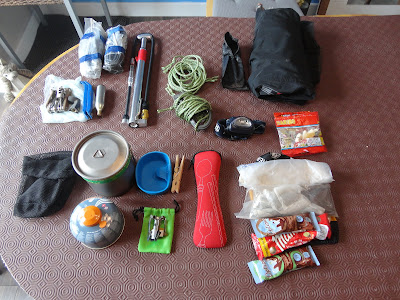 In the Frame bag: 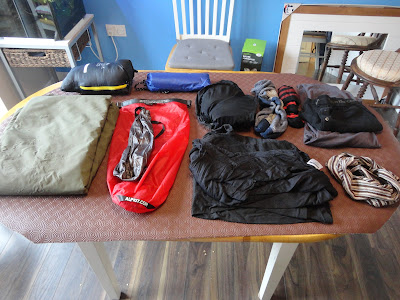 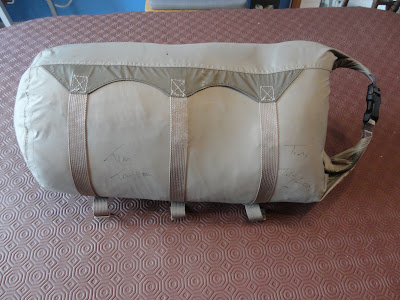 And finally, in the rear bag:
Tuesday rocked up before I could say 'wild camping loons' and I rolled up to Jamie's ready for our 'We Doo like a day off work' cycle tour the same day. It was a nice morning and all looked promising. Was kinda strange cycling parts of my old commute as I headed to Jamie's abode.

Had been mate's with Jamie for a while but this was the first time I had actually been inside his domicile. What a lovely abode too. Amongst the niceties within his home, he has a rather splendid bright orange Smeg fridge/freezer. Enough to envy our buddy Chris. Anyways, I digress... on with the story telling.

Well, after a cuppa tea, we left Jamie's and headed for Clent, the start of our tour. It was about 15k to Clent and our route took us mostly via road, however, we cycled an off-road track up and across the Wasely (?) Hills. I was expecting our official start in Clent to be a big climb up a cobbled path but we actually started just after this climb. Bonus!
We had climbed a wee bit already so we weren't that bothered the cobbled section I was expecting  was missed (and knew we would have to cycle it later). The route seemed quite different to how I had remembered it (as I had cycled the tour before) but sure enough there was a mix of on and off-road sections. Once we reached swindon we figured it was a good time to stop for breakfast (it was around lunch time). I had a pork sarnie and Jamie devoured bacon and eggs (I think) at a local cafe. Once out the cafe, we got talking to a chap who was very interested in our bike and set up's.

In true Doo style, we got lost during our next section. Somehow we had ended up cycling through Kinver and this was not supposed to happen until our return from Wolverhampton. We back tracked and obviously ended up in Kinver again. Kinver was so pretty, we felt obliged to stop at a pub for lunch. Sausage and mash and peas and gravy was my fuel and tasty it was too!

Fuelled up and off we set again and soon were back on the route proper. The navigation problem was not the only menace issue however - it started to rain. Not too bad was the rain, however, it was wet all the same. No bother, we cycled and were generally having a good old time all the way to Wolverhampton which was our furthest out point. Wolverhampton Velodrome had closed it's gates which I felt was a bit mean - we were not able to cycle a victory lap. Instead, we went inside the sports complex and ate some chocolate washed down with a hot drink.

The rain (which was not forecast) came and went as we cycled our return leg. The rain never dampened my spirits because Jamie was such good company and we cycled and chatted the wet miles away. Before long, we were back in Kinver (for the third time!) and so decided to stop at the nice pub (for the second time)!

We were real wet. Soaked to the skin. Ah ha! No bother, I had learned from the 'Bear Bones 200' that if you're soaked through to the skin, you find a pub with radiators and dry out. Dry out we did, in this pub with radiators! We felt great once we tucked into cowboy burgers too! By the time we left, our clothing was mostly dry and quite warm.
The last leg was a little bit wet. Thoughts of abandoning never crossed our minds (honest...). The sunshine had turned to moonlight, in fact, light pollution provided a red tinge to the evening sky. We cycled and chatted and eventually made our way back to the Clent Hills. We didn't find that cobbled section hilly part that we were expecting at the start ... not for a short spell anyway. Once in Clent, we figured we needed to find a suitable spot to camp in. Before we camped, it was necessary we had enough water for our porridge in the morning. A quick stop at a random curry house provided the water and a hike-a-bike up a steep bridleway soon turned into a suitable camp spot. We camped (could you believe) next to the hilly cobbled section we expected to climb at the start! Perfect. 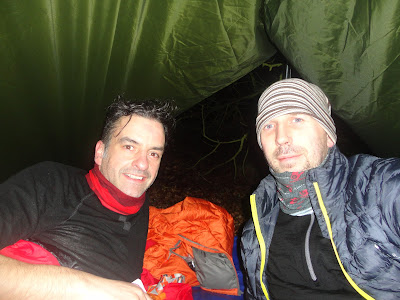 So pleased Jamie had brought his tarp. My tarp was tiny in comparison and we just wanted to fend off the rain and camp out as soon as possible. My little tarp provided a suitable ground sheet. Despite all the stuff I brought with me, I didn't bother getting changed into dry clothes. Basically, I put on my down jacket and crawled into my sleeping bag and bivvy in my damp clothes. It was too wet to faff about. I think I should have moved my hip flask into the bag where I kept my sleeping gear because I was tucked up in my bag and then remembered my hip flask was still in a bag attached to the bike. D'oh! Jamie, oh wise one, had his hip flask on him, so we drank his damson vodka and were both content. Despite the wind, rain and Jamie's snoring, the night wasn't too bad and I slept okay (on and off all night). I got up around 6 a.m. and Jamie shortly after. 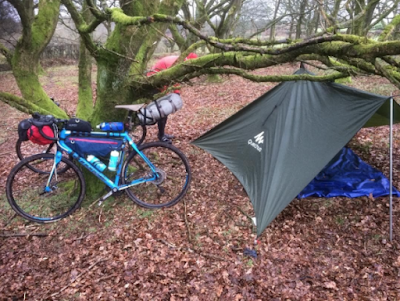 It must have been about 3C in the night and I was snug enough and warm enough in my down bag that SJ had made. My legs were cold at times (would have been just fine if I bothered to wear my long johns). My damp clothes were dry by the time I had gotten up. Everything outside was wet though. It was raining and this rain continued until the conclusion of our adventure. Before we took the tarp down and packed up, we had out breakfasts washed down with tea. Ah, this was the life. We Doo like a day off work (but Jamie had to work later today)!
After breakfast (and a sup from my hip flask), we packed up and cycled in the miserable rain. The rain beat so hard at times that my face stung. We cycled together until we reached Northfield and then went our separate ways. Today was real miserable and I was soaked to the skin. But was it worth it - yes it was! I had a great adventure and hope Jamie did too.
My next adventure was Friday. This was also a cycle adventure for two. Ooh we Doo like a tandem adventure! Roger and I cycled his tandem in a lovely loop. We cycled some of the same roads that Jamie and I had cycled. I remembered speaking to Jamie about Roger and now I was speaking to Roger about Jamie. Round and round we go, let's hope I don't lose my mojo! Another great ride. Nice tail wind on the way out but a hostile head wind on the return with a tough ascent to boot.

Would you like to pilot a tandem? Do you live near Birmingham? If you've answered yes to either of these questions then please comment on my blog or drop me line. Roger is real keen to cycle with other folk and regardless of age or experience he'd be happy for you to pilot his tandem. No experience is necessary and any distance journey is fine. Roger is blind and isn't as young as he was, so anyone able to cycle with him would really be appreciated. As time goes by, his number of cycling partners is decreasing.
Ooh we Doo like to Parkrun. Saturday saw me complete my 15th Parkrun to date. I ran around Arrow Valley once more and ran my fastest time this year - 22:13. Still not a PB but was quite pleased with that all the same. 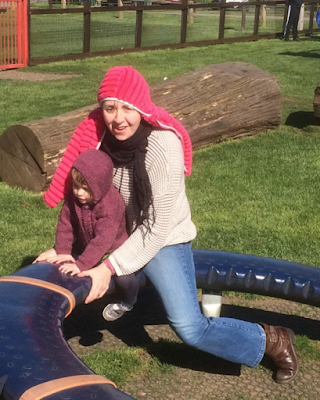 Ooh we Doo like spending time with the kids and Mrs. Finished my physical training for the week by taking my family to Bidford. We hung around and swung like monkeys. Great fun! 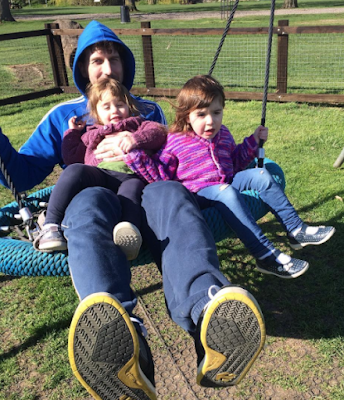