Benjamin Allen, who the 'heck is he?!

Monday was the start of my new job. I figured I wanted the day to start well, so before my work day began, I ran a 5k circuit around my village. Whilst on my run, I posted my acceptance letter for the job I started this day. Better late than never!
Day 1 was great. Day 1 was spent working from home. Simply because I was able to complete my work in speedy time, my own Day 1 (i.e. my single-speed Genesis) was taken out for a venture. What an awesome bike - had forgotten how great she rode. My ride took me on old paths from my old commute and newer paths for my new commute. Cycled just short of 50k in all. Nice! What a great start to my working week. 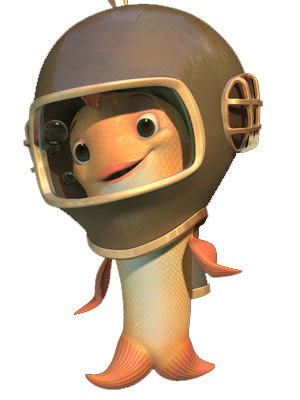 My second day at work didn't see me work so much but it hurt my head all the same. It's always the same old story when I start anything new and/or think hard. I think any fish's head would hurt if it was out of water. My head prevented me from training today. It seemed the mind ruled the body.

..you can't live easily you can't even speakfish all of them speakall over the world..

Third day at work was altogether different. The day was spent in Stafford attending service development and information governance meetings. Fish all of them speak. I hope to be able to speak fish in the passage of time too. After all, I am a fish out of water or perhaps a fish in hot water. I dunno. After work, myself and the Mrs went for a quick run which was nice. SJ ran a loop with me and then I continued on and ran a second loop. Loopy!

Days four and five at work went relatively well. All my health colleagues were very friendly, helpful and fun. Chris (maybe there is something in the name) was the most friendly of all. Wow, I completed a whole week doing my new job. (My new role hasn't really started as yet but that's a minor issue). So often I comment that work gets in the way of fun. Well, with this new job I no longer work weekends and hence had a weekend of fun!

Saturday saw me complete Benjamin Allen's Spring Tonic - a 200k audax organised my Mark Rigby. Ron was my buddy on this adventure and he kindly picked me up and took me to the start in Tewkesbury. A group (maybe 40ish) of cyclists gathered at the start and  after a few words from Mark we were off at 8 a.m. Mark became quite tearful as he informed us of the death of Mike Hall (an ultra distance cyclist) only a day or 2 ago following a RTA. A minutes silence was held in his honour. 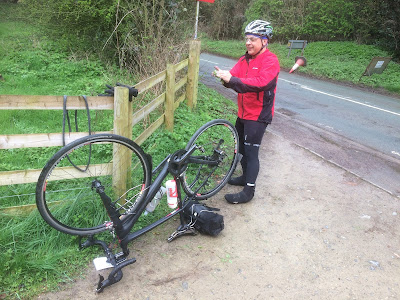 Ron was keen for us to 'jump on the buss' and benefit from a tow during the first stage. I didn't mind this fast pace start which came to an abrupt end once we hit traffic lights. The end came because Ron had his first visit from the puncture pixie. After this Mia-hap we became lantern rouge but no worries, we enjoyed a more leisurely pace to first control. Our route took us across stunning views of the Malverns and to Leominster for breakfast. Breakfast was at a pub where we had a full English. Was lucky to get there after Ron had navigated me down a 1 way street in the wrong direction.

Next stop was Hay-on-Wye. This was a pretty section but I was slightly annoyed once Lins Garmin ceased to work. It had worked for 3 hours but then the screen froze and that was that. We stopped at the troll bridge and purchased some cookies and flap jacks before a final push into Hay-on-Wye the bookshop capital of the UK. Ron suffered a second flat here and in his angst threw away his tyre and tube! 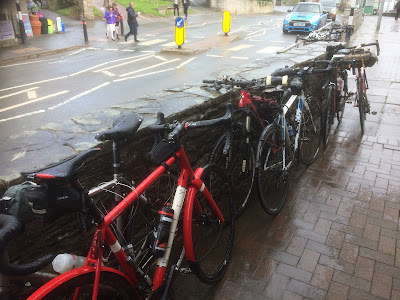 Next stage took us through the aptly named 'Golden Valley', which did appear quite golden in the shining sun. Hills aplenty here and much climbing. We climbed through Goodrich and entered the Forest of Dean. Ron suffered further mishap - some plastic got caught in his rear mech and his (was mine) map holder got busted in half. Was pleased that we were cycling along with another couple for a spell as I had so much to talk about. Once at the control we ate pastries and drank much and felt better for the remaining journey ahead.

As we left Lower Soudley, Ron's troubles emerged once more. His shifting had gone wonky and then we found out his chain link had gone duff. Tools out and problem fixed. Last leg was cycled along the Upper reaches of the Severn Vale. Just before reaching Tewkesbury we caught the couple we had cycled with earlier and used their front lights to guide us to the arrivee! Yay, job done! A couple of Desperado's to celebrate and a stamp from Mr Rigby!