Don't wish to keep raving on about the TransAtlantic Way race (TAW) 2018... Actually, I doo. This is a big race (2500k !) and have decided that I'd like to raise big bucks for charity in so doing. Have not yet decided which charity I am going to support and am open to suggestions. What I'd really like to do is support a specific project. Will keep you all posted on future developments. If you could support me supporting some project, that would be some awesome support going on.
Ultra-distance cycle racers have been described quite fittingly by J. Buhring. She says 'They are regular people with regular jobs, but once or twice a year, they race bicycles, covering distances that double or triple what pro riders in the Tour de France or Giro d’Italia race daily. They do it without the benefit of a support crew, good nutrition plans, a massage, and a comfortable bed. They carry their own gear, fix their own bikes, find their own food and water. There is no prize money or reward, apart from a cold beer and a handshake from fellow riders at the finish line.'
Both Jamie and I have been doing some TAW research and making plans. I have plotted our route for the first 5 days and found 3 cheap places where we can be accommodated with proper beds and a free breakfast on one day (and reserved our spaces). Have scheduled 2 bivvy spots and decided which bike I will take. Jamie has purchased a book (on ultra distance cycling). Ha!
This week started well on the training front. First adventure was a tandem ride with Roger. We cycled about 50k together and enjoyed the great weather, the banter and Wedges bakery. Whilst chatting, it turned out that Roger was related to Bob Scarle. Bob was the organiser of the Alan Partridge memorial audax I cycled a few weeks back. Bob is Roger's son's father-in-law (or something like that).  Small world indeed! This tandem ride was unusual in that we didn't finish at Roger's domicile. Our trip ended at Northfield Cycles so that 'The Beast' could be treated to a service. Thankfully, Roger is so well known (super star) that he got recognised at the bus stop. This spotting ensured we were driven back to his abode and missed out on a bus journey - bonus. I cycled my newly fixed commute bike to Roger's and back. On the return route, bang, my rear mudguard spontaneously combusted. Oh man, have had much menace with this bike. Hey, at least all the gears work!
Tuesday was a work and back cycle commute. Surprisingly, just 4 seconds off Ron's KOM on the commute Strava segment. Wow, maybe there is some magic in my commute bike after all.

Midweek saw me complete a 5k run around my village. I'd have liked to have ran more but time did not allow. I guess I ran out of time.

Thursday was another cycle to work and back commute. Tributes were at the side of the road near Honeybourne where some car had crashed into a tree and resulted in a fatality. Apparently a cyclist had been killed in Honeybourne the same week too. Very sad.

Decided to run into and from work on Friday. Was really cold in the morning and really quite warm late afternoon. Felt pretty whacked on both runs, regardless of the weather. 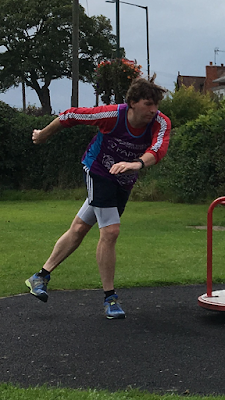 Weekend was mostly spent with my kids because my dear wife was away on some birthday jolly. On her return though, I managed to sneak in a cross country run. (I really wanted to make sure I had run more than 100 minutes because had entered a competition, whereby some lucky runner who had run 100 plus minutes was in with a chance to win a Nike sports watch. I don't want/need the watch but am hoping to win it. If it becomes mine, I'll sell it on eBay and raise funds for TAW). My run ended at the park where my wife, sister and kids were hanging out. More exercise took place. A nice way to conclude the week! 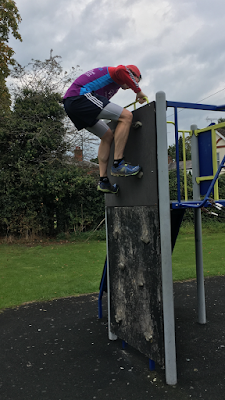