A rather pathetic Christmas blog 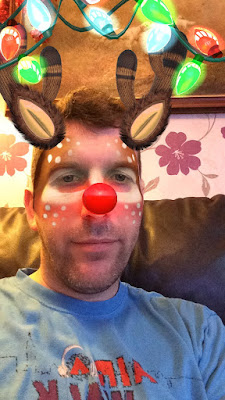 Forced myself to cycle a 200k audax this week (the week before Christmas). This had to be done - my training for the last couple of weeks had been pants. The weather, paralysis of will and life in general was to blame for my poor training. However, if I was to keep my RRTY award ('audax' language) going and if I have any hope of completing TAW without being scratched then train I must!

The audax event I chose was my very own 'Bad (Bum) Badger' perm. I completed this same ride a couple of weeks back with Jamie. This time around, it was a solo effort. Earlier start too ;) 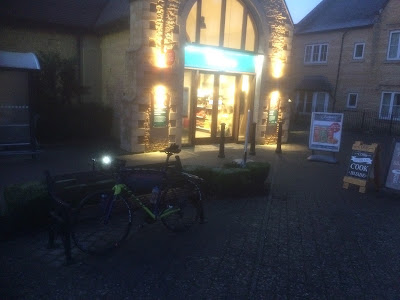 Cycled in total darkness to the first control in Broadway. Figured I'd find the ATM (Lloyds Bank) this time around because I just couldn't locate it last time. Lloyds bank was not found - they had packed up years ago. However, I did find an ATM and better yet, a Budgens store too. This Budgens store was selling products at reasonable prices and not increased prices just for being located in Broadway.

Got real chilly whilst cycling towards Winchcombe. Thankfully had packed a second pair of gloves which helped warm my digits when worn over the first pair. Cleeve Hill ensured I warmed up more. 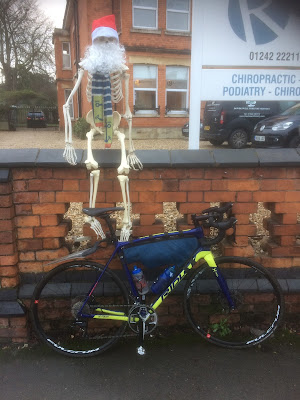 Lilley Brook Hill was the next major climb. Mr Bones was passed as usual, however, this time around he was wearing his winter attire. Heading towards Cricklade was where I first experienced menace. I tried to avoid any off-roading (due to it being wet and soggy) and looked for an alternative to the control. After going around in what felt like circles, I flagged down a MTBer and asked which way to Cricklade - he pointed me in the right direction but warned the road was closed. Closed he said, closed it was! Big barriers prevented any crossing. An off-road course had to be cycled and sure enough the bike got covered in filthy wet sticky mud. Once out of the filth, Cricklade was entered and  Stacey's Cafe spotted. All was well after eating a greasy breakfast! 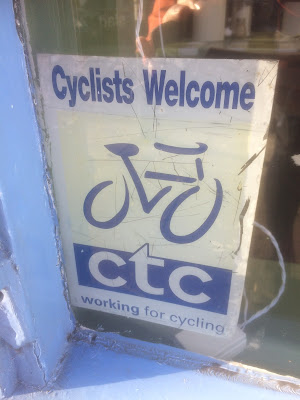 Cycling to Witney was pleasant enough and the sun was shining. Snow piles and ice on the road was here and there but no major concern. Stopped at Greggs for further fuelling. Sat on a table with some old folks who were quite chatty and interested in my cycling pursuits. 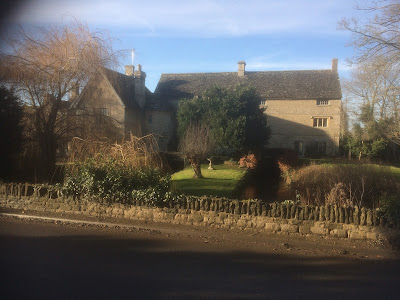 Leaving Cricklade and heading for Banbury the light started to fade. It wasn't dark so much, but a strange glowing pink. Looked kinda pretty but kinda strange too. Seemed a bit of a drag to Banbury (I think my head-space thought it was only 20k away but it was double that). Reached Banbury and pigged out at Master Kebab eating a mega lamb kebab.

Ride from Banbury home was difficult. Pretty much the whole trek home was now in pea soup which got progressively thicker. A quick stop in Stratford before I pushed on through the thickest fog ever and reached home. Wahoo! December's 200 ticked off.

Woke up Tuesday feeling pretty whacked but voices in my head were whispering 'back to back'. Didn't feel like cycling but figured I'd at least go for a run. Donned my running gear and took Lunar to school. No chance of running back home though, the roads and path's were covered in ice. Such a busy day was not able to fit a cycle in. High-light of the day was seeing Lunars 'play' as she participated in her first Nativity. Accompanied SJ to her physiology appointment too - looks like her foot is on the mend at last! 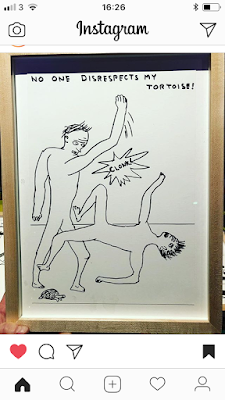 My family and I spent a gluttonous time at Lin's which was fun. We caught up with my buddy Chris too which was nice. We had a merry time. No exercise took place at all - I guess you could call it recovery... 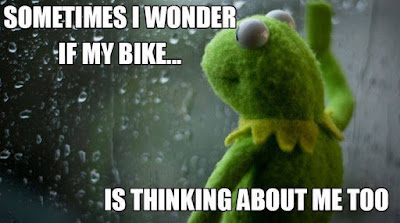 Not sure any exercise will happen before the new year now. I know I need to train but I feel quite dis-conditioned. A little more excess and merriment may be in order before a training focused new beginning in January. I'll aim to post once more at years end/beginning. Until then, peace out!
at December 26, 2017