Jamie awoke on Day 10 in a bright and bubbly mood. He was really quite comedic in fact. Jamie acted out a little sketch, similar to the 'Fast Show' on TV. He would recount all my despairs and list all the 'bad luck' that I had endured on this adventure starting with a de-flating mattress and ending with multiple counts of broken spokes. After each item was identified he would comment 'Poor Tim ... Oh dear (or words to that effect). I think Jamie's sketch jinxed me - about 3k into our ride today and ping, another broken spoke. Poor Tim ... Oh dear! 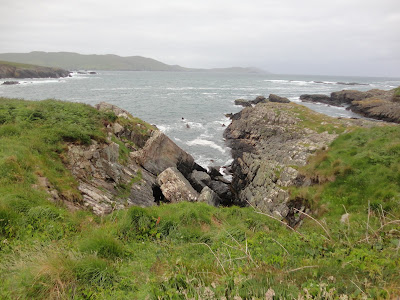 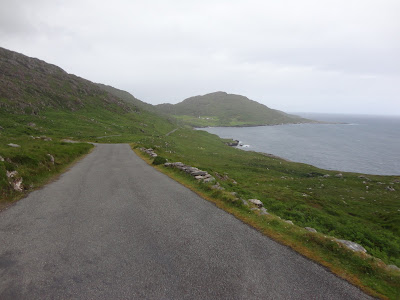 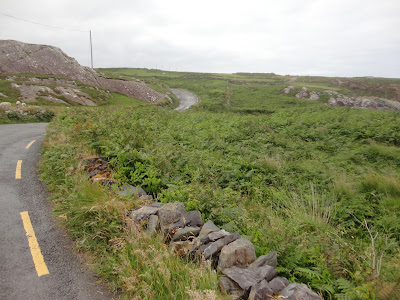 Not only had Jamie jinxed my spokes, it all started a little drizzly today. The drizzle didn't last long and the skies soon brightened. The wonderful scenery helped keep us both chipper. 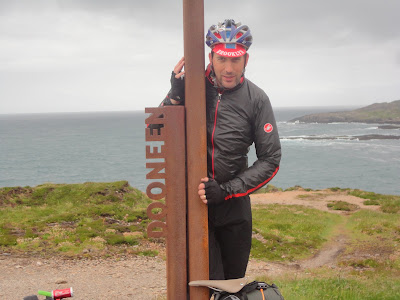 So many places were called 'Doo-something or other'. I particularly liked Doonean. Kinda felt at home. Maybe I should fight for an island and name it DooBlood?! 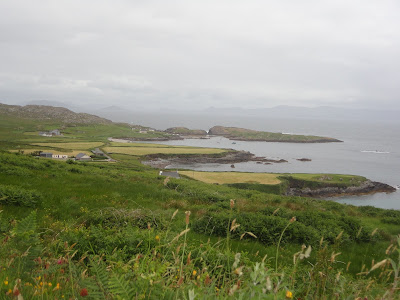 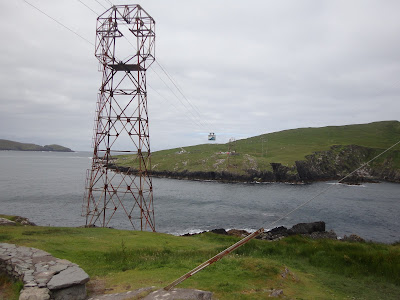 On the subject or islands, our cycling took us to Dursley island today. We didn't actually set foot on the island because it required a trip on a cable car (or boat I guess) to get across. This was one of those out-and-back bits of the race route we had to follow. We cycled the same tarmac twice just to see a naff cable car. Ha!
Jamie and I had cycled some pretty long distance now. In fact, this was the furthest either of us had cycled before in any event. Today, like most others was a pretty hilly affair too! 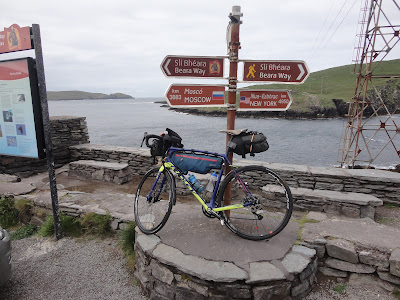 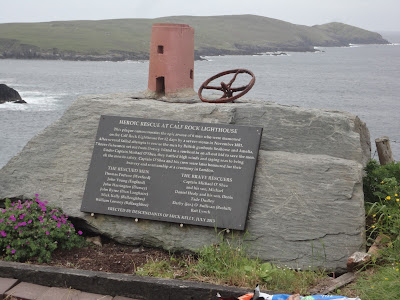 There was a particular ace memorial (see pic above) here. This memorial was erected to remember the epic story of the rescue of 6 marooned men on the Calf Rock Light-house, who had been marooned for 12 days in ferocious conditions. The light house is located on the teeny weeny island in the background of the below photo. The 6 marooned men were saved by fisherman from Dursley island. Aces! 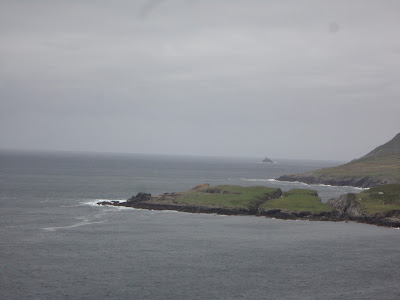 Kay, I believe, had located a bike shop for Jamie and I to head for. This was in a place called 'Castle Beer', I think. Turns out we found no castle, no beer and no bike shop there. We phoned the 'hidden' bike shop and was informed the mechanic was not there anyhow but could be located at a bike shop in Bantry. We stopped and had a food/drink stop here and then, of course, headed for Bantry. For the record, I had cycled so many miles on a wheel with a missing spoke and had a tally of 5 broken spokes thus far. 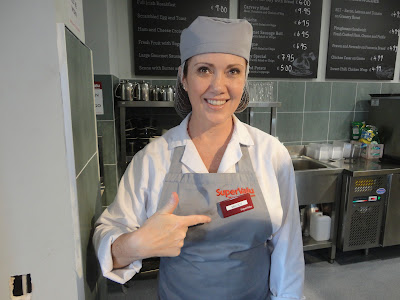 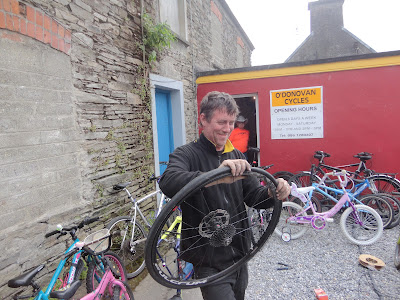 We found Bantry just fine. Better yet, we found 'O'Donovan Cycles'. Even better still, we met the awesome Denis. Denis was able to fix my wheel good and proper once again. Thankfully, I had the spare spokes given to me by Chris Troy which helped complete this repair. Denis commented that it was now 'straight as a whistle'. Top man, top job! 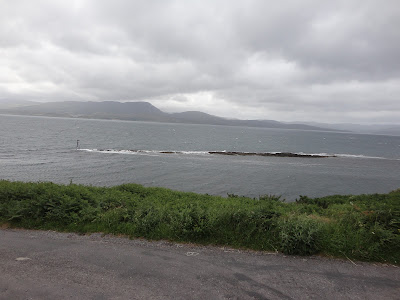 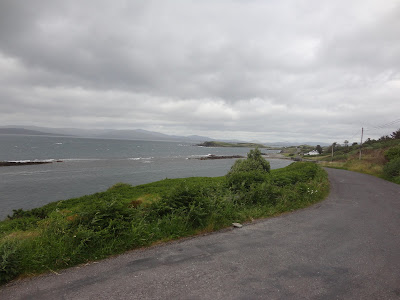 How happy Jamie and I were now my bike had been fixed once more. A working bike does wonders for one's morale. Jamie's disc pads (front) could have done with re-placing but finding spares for his particular set up in Ireland was mission impossible. At least both bikes were now functional. The scenery was once again mind blowing too. 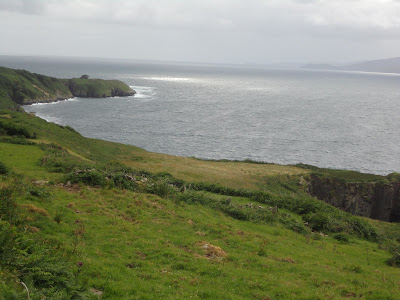 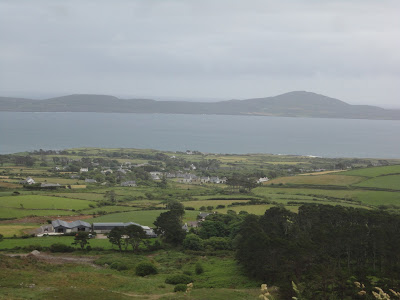 I particularly liked the long snake like roads that could be whizzed down at speed. At both top and bottom of such descents were amazing mountainous and coastal views. All this plus a fully functional bike. Woo Hoo! 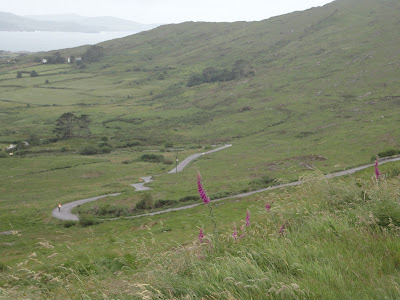 It wasn't long before we came to a fork in our track. This was another out and back section. We had to follow a section named 'Sheep's Head Way'. This was hilly but led to Ireland's most South-Westerly point (if I'm not mistaken). 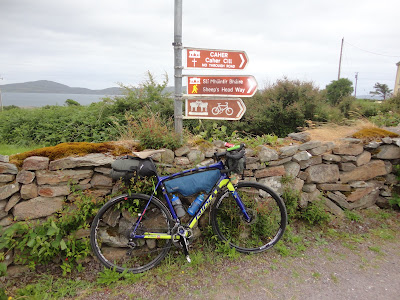 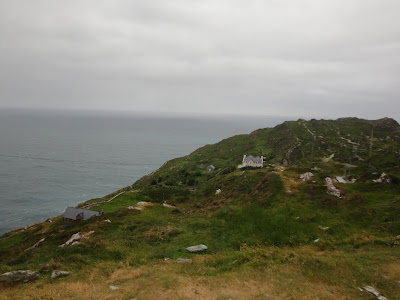 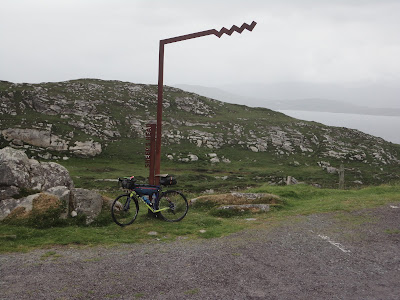 The view point offered great views. No matter how hard I looked, I could not spot the the light house though. An old boy (who lived here) said we would have to scramble a further mile over some rocks to view it. I chose an alternative and just looked at an information sign which had the picture below printed on it. I commented to the old boy about the wonderful views he had each day, he replied 'I don't bother with it'. Nowt as queer as folk. 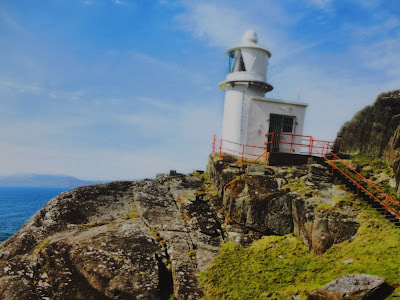 We re-traced our steps and cycled back and further on, on our adventure. We saw lots of ruins and abandoned buildings. Our senses were buzzing all the while. 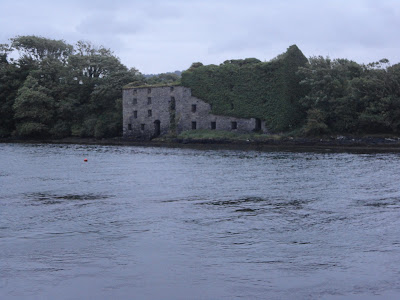 We cycled until we were tired. We were tired before it was dark. Wowser, we spotted an awesome, huge abandoned house. We knew exactly where our wild camp would be tonight! 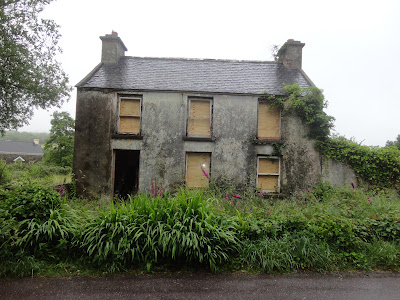 It was great setting up camp in daylight. It was splendid we had an (at least) 10 roomed house to ourselves. It was amazing this house came fitted with an upstairs toilet! 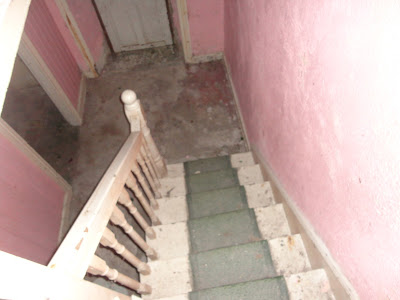 We chose to sleep downstairs as birds (?swallows) were flying about upstairs. I'm sure Jamie thought they were bats. Some folk reckoned we were both batty. 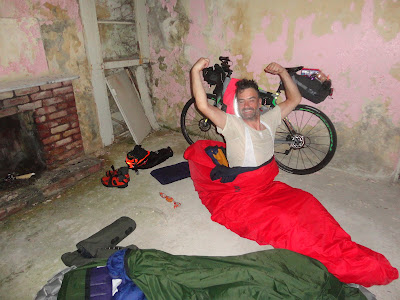 Whatever, this was an awesome place to camp out. It was dry and it was ours. So warm, we didn't even have to light the fire! 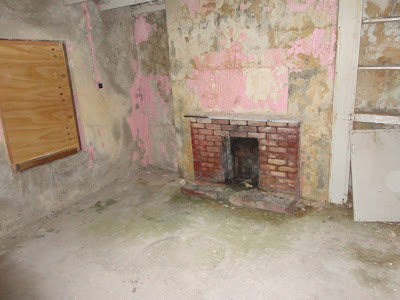