Woke up on day 2 feeling relatively fine. I had no back ache at all, not even a little bit. Amazing to think that just a week prior I was in so much pain and struggled to walk and sit. Only real menace was that my eyes felt like they had sand in them and I had a little sun burn. Jamie appeared to have no  major issues either. Once out of bed it was nice to shower although there was no soap. This shower proved to be my last for a good few days.

Following our showers, we sat down for our amazing breakfast. This amazing breakfast did not include a fry up like we were led to believe. This was a do-it-yourself breakfast that consisted of cereals, toast and yoghurt. Ah, and 'the eggs' were in a basket on the side but we did not indulge. This was a hostel and we had to cook, wash and dry everything we used.

Oh the horror we had when we went to collect our bikes. The room where they were stored was not a room at all. They were outside on a roof or something and covered in rubble and builders gear and surrounded by a few builders who were building away. Just like Mr Fat Man the night before, these builders appeared put out when we went to retrieve our bikes. We were glad to leave the hostel and continue with our cycling endeavour. 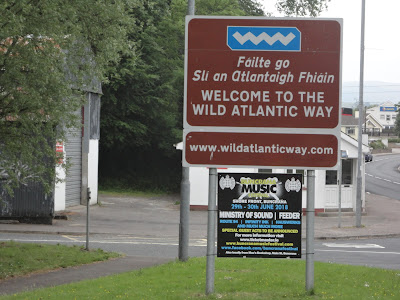 Today was the day that we actually started to cycle the Wild Atlantic Way. It really felt that our adventure was in full swing now. The little Wild Atlantic Way signs were now going to be a common occurrence of all our rides until the finish.

Not long after leaving Derry, we had also left Northern Ireland and all the sign-posts, car number plates, currency, etc had changed again. The cycling was awesome with some great climbs and perfect hot weather once more. We felt very blessed to be able to participate in this event and reflected that although we were now 'skinted', what a privilege it was that we were actually here. Some folk surely were not cycling because of lack of funds. (Some folk were cycling because they had 'sponsors' and were gifted with bikes, luggage, clothing, bike-fits, etc). 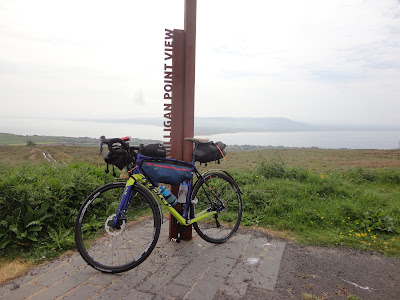 The great hills we cycled often had awesome view points at the top. How great it was to stop and have a view and think 'wow, we just cycled that'. God's creation in Ireland was really mind-blowing.
The weather being so hot again was causing tarmac to melt in places. In other places, fresh tarmac was being put down. On one occasion (in fact two) we had to dismount bikes to avoid our tyres popping due to the hot tarmac.

The hot weather was great. It was excuse enough to stop for ice creams. Oh, ant the coke we drank too!
It wasn't long before we encountered a beach. A lovely empty beach. Being on a jolly, we had to stop and pay a visit. Such a lovely stop - the perfect place for an impromptu picnic. 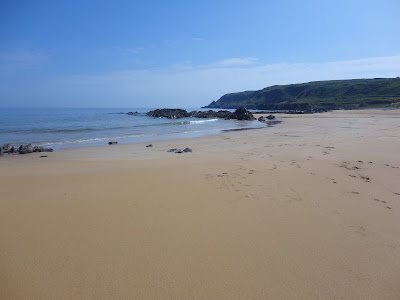 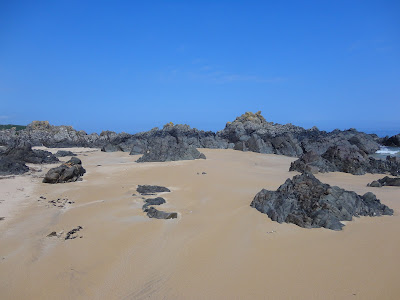 Leaving the beach and continuing forward, we found the end of a rainbow. Indeed, at the end of this rainbow was a collection of those super nice (the best) cereal bars we were given at the start. I think a leprechaun had left them there for us. We promptly tucked these bars into our jersey pockets and left with beaming smiles. 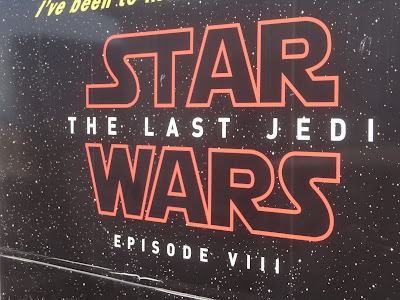 Jamie and I were living the dream. Cycling an epic event with such stunning scenery and perfect weather to boot. And, with long stretches of straight down-hill, what could possibly go wrong?! 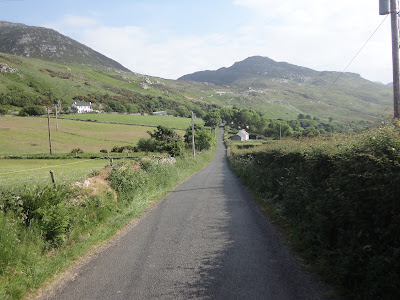 As well as cycling lots, we would eat lots too! Cycling and eating are both great activities and both hobbies of mine. Frequent stops to a supermarket for food (and tea for me and 2 x cups of coffee for Jamie) were a frequent feature. 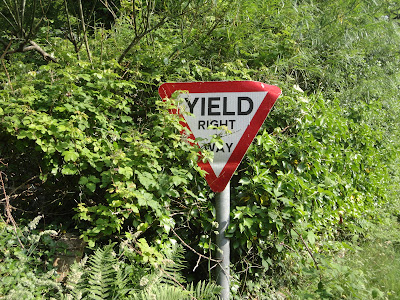 Funny the things you notice whilst cycling in Ireland. One such funny thing was the fact that they don't 'give' but rather 'yield'. Ha!
Had posed the question earlier, 'what could possibly go wrong?'. Well, that was answered when I had started to climb the biggest, most severe hill of this challenge. This was the first 'Mike Hall KOM challenge' hill (we think). Was so enjoying this tough climb when all of a sudden 'pop', grr, oh no, a spoke had broke (and front mech wasn't shifting perfectly either). This was a slight menace to say the least, especially as my (rear) wheel had so few spokes anywhere. Taped the spoke to another and carried on. Jamie made contact with his good lady (Kay) back in England and she was on the case of searching for a bike shop to repair broken spoke.
With only mild anxiety following the broken spoke, we cycled until it was dark. Tonight was going to be our first wild camp. Before we had to look for a suitable spot, an abandoned house just appeared. Without further thought, we entered this building and settled down for the night. Little did we know that this house was oh so similar to the Blair Witch project...