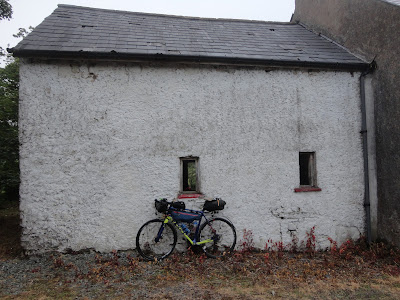 Our stop in the 'Blair Witch' house was a real experience. When we first set up camp and tucked ourselves into our bivvy bags, sleeping bags and liners all seemed real well and it didn't take long for us to drop off. However, at some uncertain time in the morning, we awoke to some unintelligible Irish voices from outside. We both froze in our bags and feared the worse. I figured they must have known we were inside as Jamie was snoring so loud before he was awoken. Thoughts crossed our minds that they were the IRA and we were in a building that was storing arms. Oh heck, they're gonna knee cap us both. How do we explain this one?! These voices remained for what seemed like forever (and forever is a very long time) and then we heard the noise of burning rubber. One of them was clearly in a vehicle and was burning doughnuts outside our camp. 'Doughnut Dan' as we dubbed him, appeared to stick around for a while before tearing off. Thankfully once off they didn't return. Jamie and I managed to sleep quite fine following this and our experience didn't seem quite so frightful once morning light appeared. Further menace was noted in the morning however, my air mat had deflated and we both had some midge bites. In addition, I think Jamie was covered in mosquito bites too. The mozzy's never bothered with me but Jamie was riddled with bites throughout our adventure.

By 7 a.m. we were out of our dwelling for the night and back on the open roads. It was quite misty initially but still frightfully warm. Wow, we were on day 3 of our adventure already. 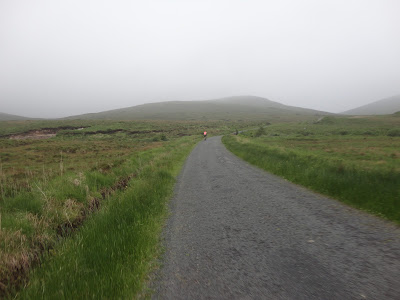 Today we had formed a plan to ride through Glenveagh National Park and search out a bike shop. I think we had intelligence from Kay suggesting a bike shop on route. Can't recall exactly what happened but my notes record 'bike shop found, no joy'. Hmm. Maybe I'll remember more as I continue to write this experience up. 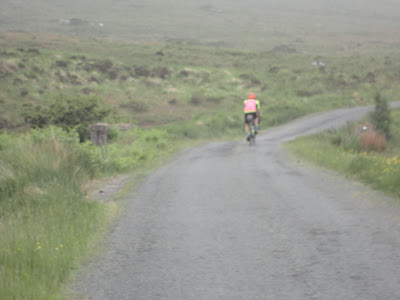 What we did find was the gravel section of the National Park. We took a while to descend this section for 2 reasons. The first reason was because Jamie was searching for a tracker that had been lost here (with a promise of beer if found). The tracker was not found (phone signals were poor in this area). The second reason for a slower descent was my fear of breaking more spokes. I tore down with some speed but remained cautions none the less. 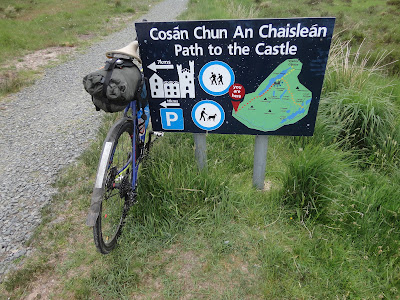 Cycling through the park was great. The views were stunning and there was a stillness in the air. Such beautiful waters and lovely single track. 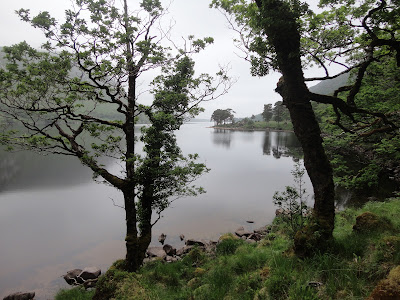 The cycle past the castle was lovely too. Not the most amazing castle ever seen but a great sight to behold all the same. Most castles we saw were in ruins, but they still looked awesome. 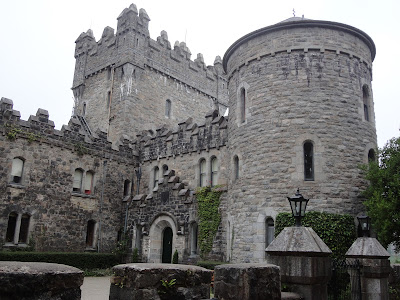 Such an excellent breakfast stop was found. Clear of the National Park, we stumbled on Coffee Go Leor in Falcarragh. Of course we opted for the Wild Atlantic Way Breakfast. I ate more black and white pudding on this adventure than I had ever eaten in my life before. I tasted black pudding at home and wasn't a fan, now I'm kinda accustomed to it. White pudding is much more yummy than black. Who'd have thought?! 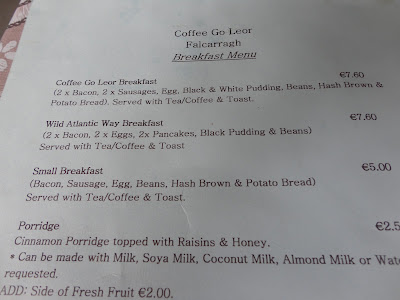 At this point in our adventure, I was yet to taste a Guinness. Guinness was advertised and promoted everywhere. Jamie had made it a mission of his to ensure I drank a pint of the stuff in Ireland before our return. Time would tell. 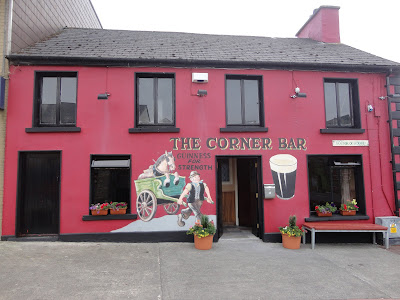 At another point in our adventure we had found a bike shop (Kay most probably provided the intelligence). Ah yes, I remember, the bike shop looked more like a 'Sports Direct' store though the shop girl was sure that 'the mechanic' could help. Problem was, the mechanic was on a call out and would not return for a couple of hours. No bother, we found somewhere to eat and if I remember correctly, we ate more pudding, mushrooms and chips. I think we had a couple of pints too (cider for me). After a few trips back to the bike shop, we located the mechanic but sadly he was not able to help with my broken spoke. Ireland bike shops are not modern and a bolt-thru axle was considered very modern age here. He was unable to remove 'the something' on my wheel and had no spokes of a suitable length. The mechanic was a helpful chap and suggested I call 'Don' in another bike shop some distance away. Don sounded grumpy on the phone, stating that he was fixing bikes and spokes already for other TAW riders but agreed to look at my bike if I cycled to him. There was nothing for it, we headed to Don's. 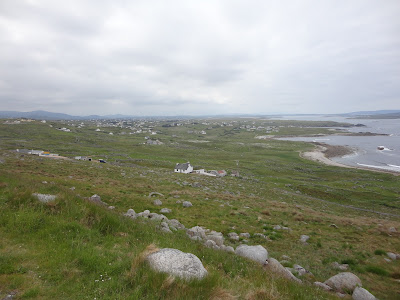 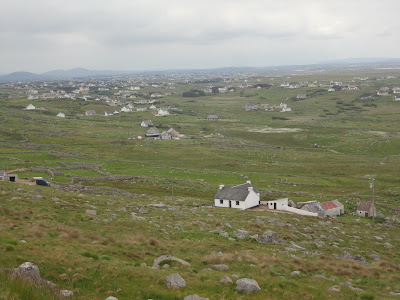 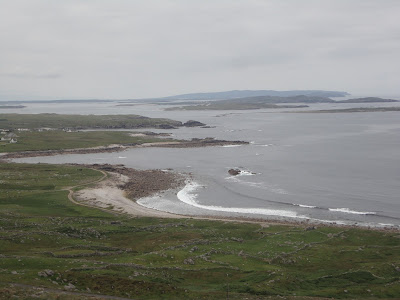 Cycling to Don's was great. We appeared to be high above sea level and all the houses we could see looked just like miniature models. I loved cycling by the coast and seeing the different colours of the sea, smelling the ocean air and seeing stretches of beach. 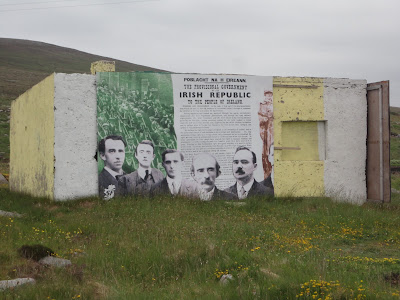 Of interest, was the fact that we saw little 'graffiti' in relation to 'the troubles' of Ireland. Most wall paintings referred to 'Free Palestine' or similar. I'm not even sure if the picture above was to do with 'the troubles', the chap on the right looked like Hitler... 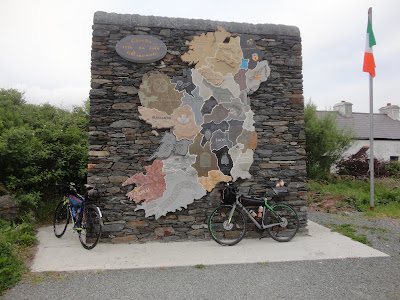 In more modern times, like now, I figured Ireland was more together. The map of Ireland above was made of rocks from all different counties or regions in Ireland. Looked pretty amazing. 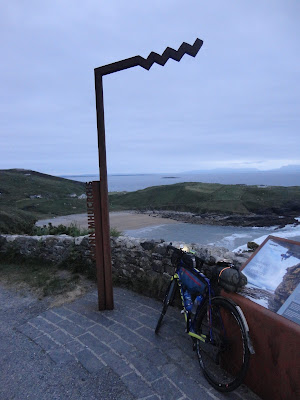 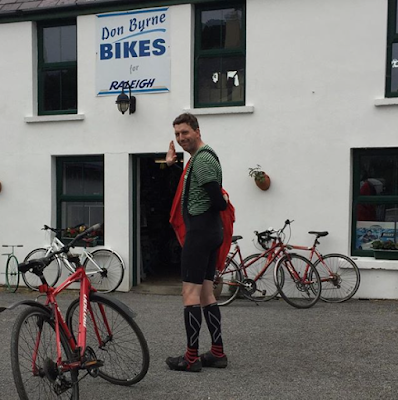 Don was a great chap and super friendly. I felt guilty for thinking he sounded grumpy on the phone. We spent ages at Don's and he chatted some and following checking internet a couple of times, removed parts from my wheel with incorrect tools but most importantly fixed the broken spoke! Wahoo! Don was a teacher in his past and taught a whole load of local folk mathematics. So pleased were Jamie and I that we could continue our adventure and hopefully not waste too much more time.
Due to time wasted (though spent appropriately) we were not able to reach a pre-booked hostel. We cared little and figured more wild camping meant more wild adventure. Jamie had proved himself to be a great buddy and cycling partner here. He never grumbled about my broken gear, stuck with me for hours waiting for folk to appear or stuff to be fixed (others would have carried on) and was pleased as punch to change plans and 'go wild'. Top block, little did he know we would end up sleeping outside a shop window. 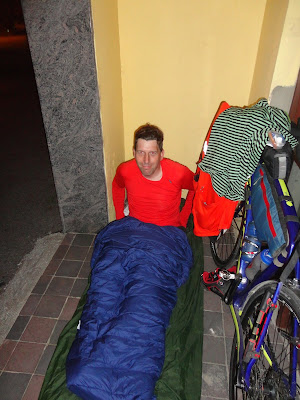 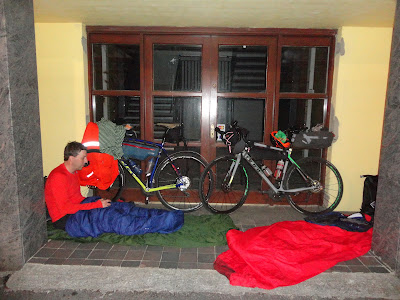 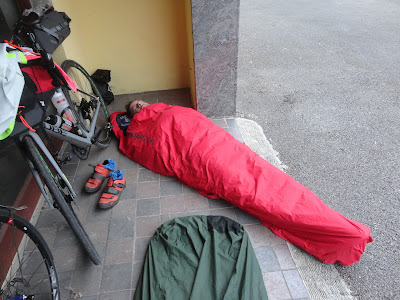 Not sure how well we slept, but sleep we did. Jamie's snoring certainly indicated he was sleeping a little! My sleep was shortened a trifle because my air mat deflated in the night and a re-blow up was required. I would get cold once my body was against the floor. I think the many miles and huge amount of adventure helped me to drop off and snooze somewhat.