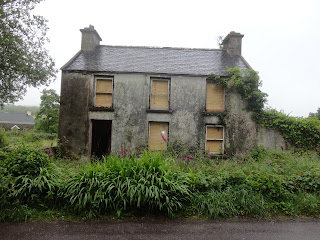 On our last day we woke up late (for us). We awoke about 7 a.m. and were kinda sad to be leaving the old house. Still, we had an awesome last night wild camp to shout about. In fact, we planned to shout about each of our 7 wild camp nights.
The weather throughout our trip had been mostly great. Today was no exception. We even saw a number of folk swimming in the sea. We were tempted to skinny dip but we had a race to finish. 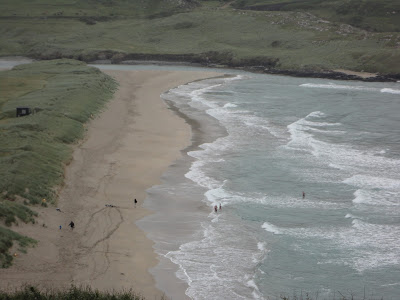 The nearer we got to the coast the more hazy, wet and drizzly it appeared to be. It was as though the points or 'fingers' of Ireland were trapped in the clouds. 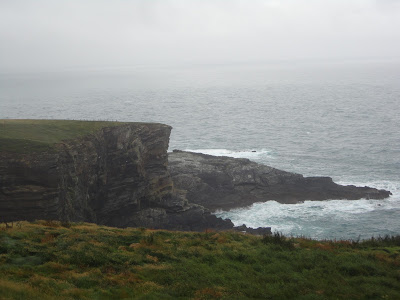 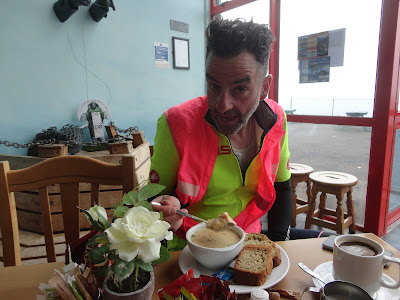 Jamie completed one of his missions here - to eat the dish known as 'sea food chowder'. Mary O'Driscoll from the cafe was super nice and gave me free tea. She gave both of us fridge magnets to take home. Nice one Mary, many thanks.
We left Mizen Head with happy hearts and full bellies. The Irish were so kind and friendly. Was sure my wife was gonna love the fridge magnet. 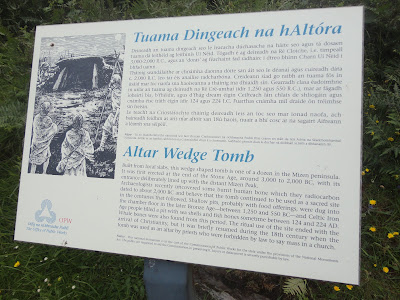 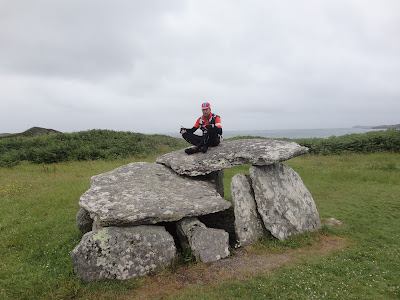 As we continued our adventure, we found a tomb that was worthy of a stop. We had seen lots in the way of standing stones and such like. It only felt proper that we pay one a decent amount of visitation. Could have been a suitable wild camp spot. 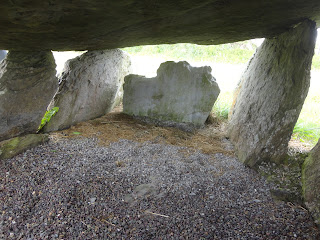 Whilst we cycled, we were again reminded of the famine. It appeared that so many places of beauty hid stories of sadness. The story we were creating was one of joy. 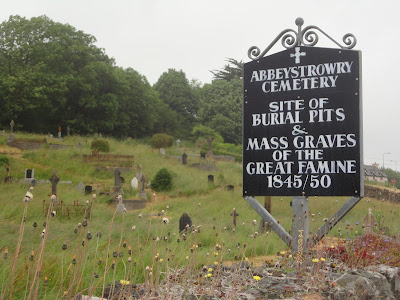 Today's route was about 100k more than what we had originally planned in our minds (easy last day logic) and was hillier than our thoughts allowed too. All my repairs had slowed us a little. We didn't much care as we were getting good value on this adventure with so many wonderful sights and awesome paths/roads to cycle. 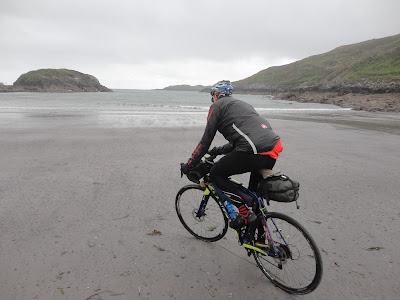 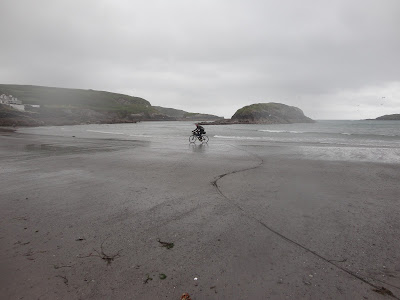 We didn't get time to skinny dip earlier. However, by now our machines were crying out to taste the Irish sea. Was only right we dipped their wheels in the ocean. 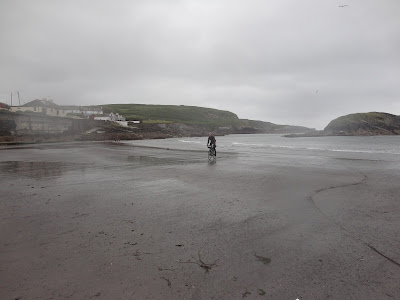 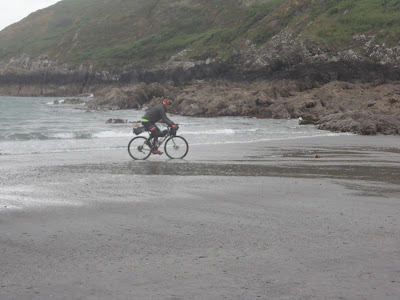 At some point during our last day we were stopped by Breifne Earley and interviewed. We were not prepared for this encounter. I'm sure we spoke a lot of nonsense. This was the second time we had been interviewed during this TAW experience and Breifne had interviewed us both times. Am sure these interviews are floating around the internet somewhere (FaceBook most probably) but can't seem to locate them or embed them on this site. Breifne has a story of his own and I kinda wish I was interviewing him. Breifne was essentially a big, big lad and troubled with suicidal ideations back in 2010. Fast forward five years and he was the winner of the World Cycle Race! Now that mine and Jamie's TAW story is nearly over, don't despair, have a read of Briefne's story by clicking here. 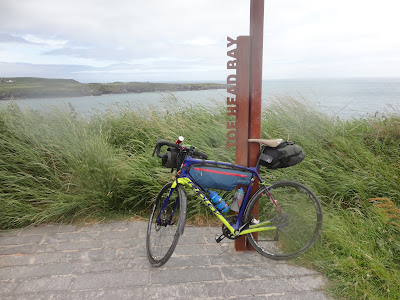 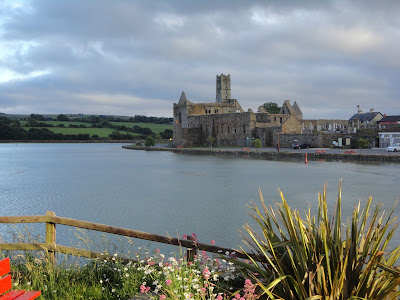 Oh Ireland, we were sure going to miss the specular views you had to offer. The moody and angry skies would be hard to forget. This adventure will be etched in our minds for years to come. 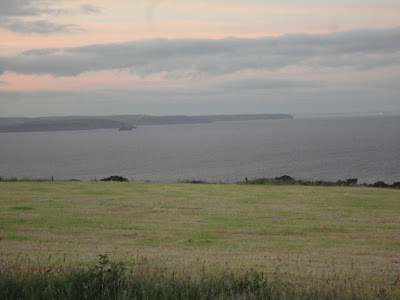 Red sky at night. A shepherds delight - not a cyclists (read on).  Whilst we were riding under this red sky we were again chased by a dog. No dog whispering on this occasion. I'm sure the dog actually bit some rubber. We really didn't want to ride any faster, the end was soon approaching.

Literally 'just' before the end, we met Breifne again. He asked if we wanted to stop and have a pint in the pub now we had reached Kinsale. I said 'yes', but Jamie said 'no'. Jamie was more conscientious and wanted to 'finish' so all our dear dot watchers could see we had finished and relax. Jamie won and we bolted up that last hill (about 25% gradient) with ease (folk said it was tougher than it was and had expected us to push - pah!). From top of hill and into holiday village - the end! Woo hoo, yeah man, race completed! Jamie finished before me (my tracker had gone wonky and wouldn't 'bounce' for a while to indicate that I had actually finished). Hmm, maybe I should have gone for that pint?! 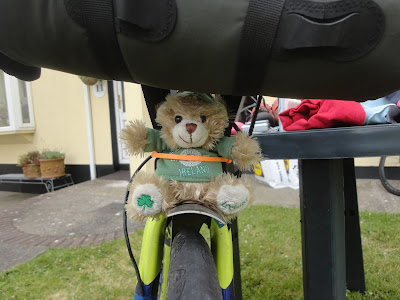 Wow. Well done Ted. Well done Jamie. (Well done my dear SJ back at home, looking after our kids and all on your own, I missed you so!) 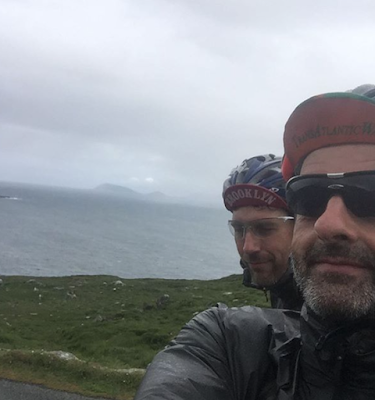 Jamie, Ted and I had just spent 11 days together on a most amazing adventure covering many, many miles and mis-haps. Awesomeness and adventure a-plenty! We had cycled so much of Ireland (see the map below) and now have a collection of stories we could talk about forever. I hope all these blog posts have helped capture the nuts and bolts of our adventure.
And what exactly did we do at the finish? We shared beer (Smithwicks and a Guinness of course) and stories with Maddie, Jack, Briefne and Ryan Davis (our welcoming party). We ate. And then we slept, in a real bed, how strange! 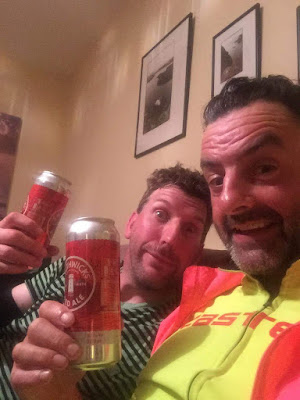